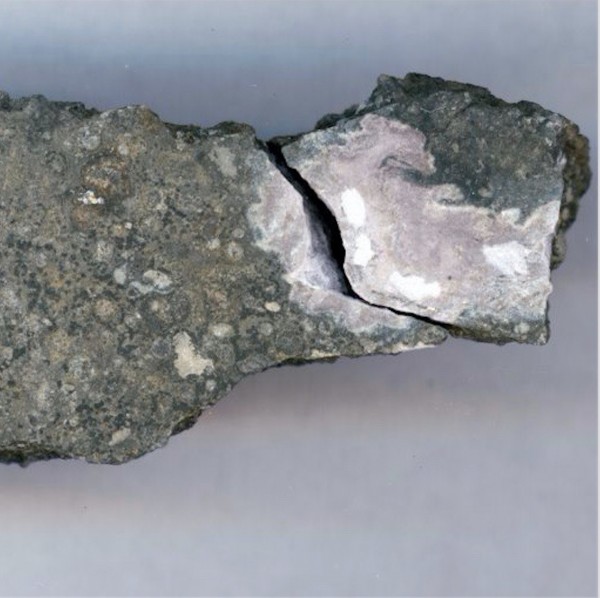 Close-up of a meteorite sample, showing a ceramic-like refractory inclusion (in pink). Refractory inclusions are the oldest-known rocks in the solar system (4.5 billion years old). An analysis of uranium isotope ratios showed that a long-lived curium isotope was present early in the solar system when this inclusion was formed. Look below to see the entire meteorite. Image via Origins Lab, University of Chicago.

Researchers have found evidence that curium – a rare unstable heavy element – was present during the early formation of our solar system. Even though curium has long-since decayed into a form of uranium, signs of its presence remain in a pinkish ceramic inclusion nicknamed Curious Marie, a tribute to Marie Curie for whom the element curium was named. This discovery will help scientists refine their models of how elements are forged in stars and supernovae, and gain a better understanding of galactic chemical evolution.

These scientists published their discovery in the March 4, 2016, edition of Science Advances. François Tissot of the Massachusetts Institute of Technology, the study’s lead author, said in a statement:

Curium is an elusive element. It is one of the heaviest-known elements, yet it does not occur naturally because all of its isotopes are radioactive and decay rapidly on a geological time scale.

Nicolas Dauphas of the University of Chicago, a co-author of the paper, added in the same statement:

The possible presence of curium in the early solar system has long been exciting to cosmochemists, because they can often use radioactive elements as chronometers to date the relative ages of meteorites and planets. 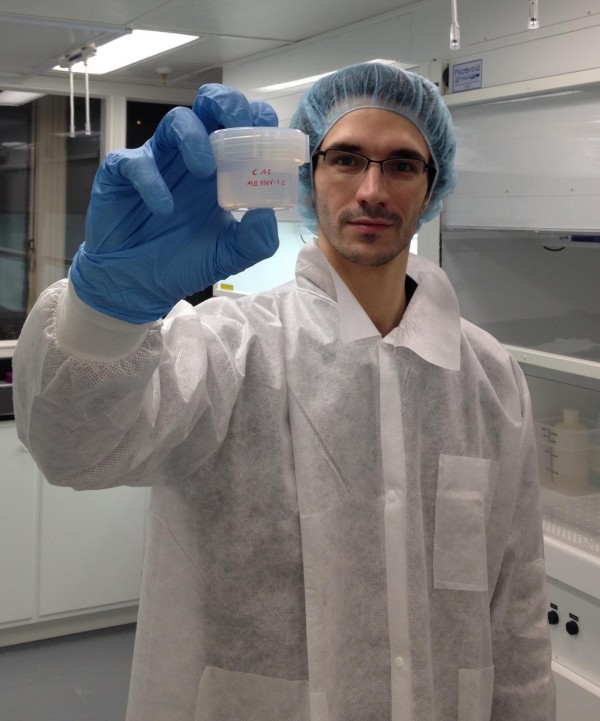 Scientists first discovered curium when by artificially creating it in a laboratory in 1944. They’ve also found it as a byproduct of nuclear explosions. Today, curium is mostly created for research purposes, and it’s been used in x-ray spectrometer instruments in several NASA missions to Mars.

In the past 35 years, there’s been some debate about whether curium, one of the heavy elements created by supernovae, had been present in the early solar system. Until now, searches for indirect evidence of curium in meteorites had yielded inconclusive results.

The early universe was mostly hydrogen and helium that condensed to form galaxies. In the galaxies, many heavy elements were created in the interior of stars. The heaviest elements were formed in the explosion of very massive stars, called supernovae.

All elements were dispersed into gas clouds that would later condense to form another generation of stars. The cycle would then repeat to create a third generation. With each successive generation, the stars became richer in heavy elements. Third generation stars, like our sun, that have higher abundances of heavy elements, are thought to be more likely to form planetary systems.

Supernova explosions create the heavy elements such as uranium and curium. Most of the uranium created in this way was in the form of uranium-238, with smaller amounts of uranium-235. Curium isotopes are highly unstable. Even its least unstable isotope, curium-247, only exists for several million years. As a result, all naturally occurring curium-247 in our solar system has long since decayed to become uranium-235.

Models describing the creation of heavy elements predict a low abundance of curium.

Since curium-247 decays over several million years, only materials that condensed from gas and dust clouds during the earliest stages of the solar system’s formation were likely to contain curium. Therefore, what the researchers needed were meteorites with a low abundance of uranium that had very old inclusions. Among those specimens, they may find inclusions that once contained curium-247 that now had noticably higher levels of uranium-235.

With the help of Lawrence Grossman from the University of Chicago, also a paper co-author, the team looked through some of the oldest-known meteorites, called carbonaceous meteorites, that are about 4.5 billion years old. These meteorites are also known as CAIs for their calcium- and aluminum-rich inclusions that were some of the first solid materials to form in the early solar system. CAIs are also known for having low levels of uranium. 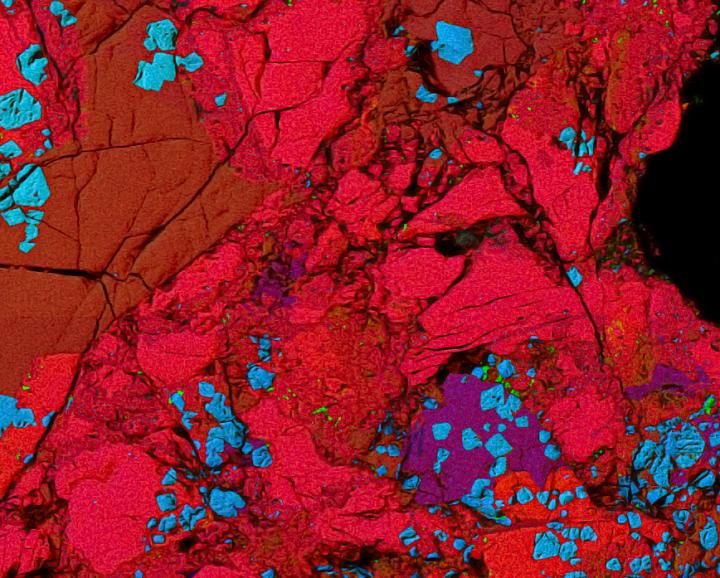 This false-color image shows a cross-section of the Allende meteorite, approximately one-hundredth of an inch (0.5 millimeters) across. It is peppered with inclusions that have a ceramic-like chemistry. Calcium is shown in red, aluminum in blue and magnesium in green. These inclusions contained an isotope of curium-247 that had a half-life of 15 million years. Evidence of curium was found due to a significant increase of uranium-235 that is produced from the decay of curium-247. Curium was created along with other heavy elements in supernovae. Image via François L.H. Tissot.

The team found what they were looking for in a meteorite sample that had a pinkish ceramic inclusion they nicknamed Curious Marie. Said Tissot:

It is in this very sample that we were able to resolve an unprecedented excess of 235U [uranium-235]. All natural samples have a similar isotopic composition of uranium, but the uranium in Curious Marie has six percent more 235U, a finding that can only be explained by live 247Cm [curium-247] in the early solar system.

With the data from the Curious Marie meteorite inclusion, the team ran calculations to determine how much curium was present in the early solar system. In comparing the result with amounts of other radioactive isotopes, iodine-129 and plutonium-244, they determined that these isotopes could have been produced together by a single process in stars.

This is particularly important because it indicates that as successive generations of stars die and eject the elements they produced into the galaxy, the heaviest elements are produced together, while previous work had suggested that this was not the case. 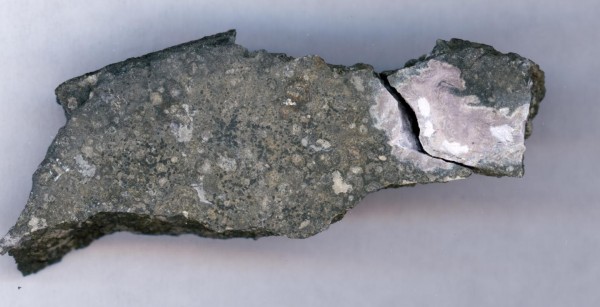 The entire meteorite sample, with its ceramic inclusion (pink). The meteorite is 0.59 inches (1.5 centimeters) across. Image via Origins Lab, University of Chicago.

Bottom-line: In the March 4, 2016, edition of Science Advances, researchers from MIT and the University of Chicago report on evidence that curium, a rare unstable heavy element, was present in the early solar system. The evidence comes from an indirect detection of the curium in a pink ceramic inclusion nicknamed Curious Marie.