Meteor lit up sky over US east coast on March 22

People from North Carolina to Maine, and as far inland as Ohio, saw a very bright meteor streak across the sky on March 22.

At about 8 p.m. last night (Friday, March 22), people in the U.S. East – from North Carolina to Maine, and as far inland as Ohio – reported seeing a bright flash streaking quickly across the sky. It appears to have been a small meteor, or rock from space. The object didn’t explode and cause damage like the Russian meteor on February 15, 2013. The object over Russia is now believed to have been 17 meters in diameter before it struck Earth’s atmosphere. The March 22 meteor was probably much smaller, more like one meter, according to NASA experts. 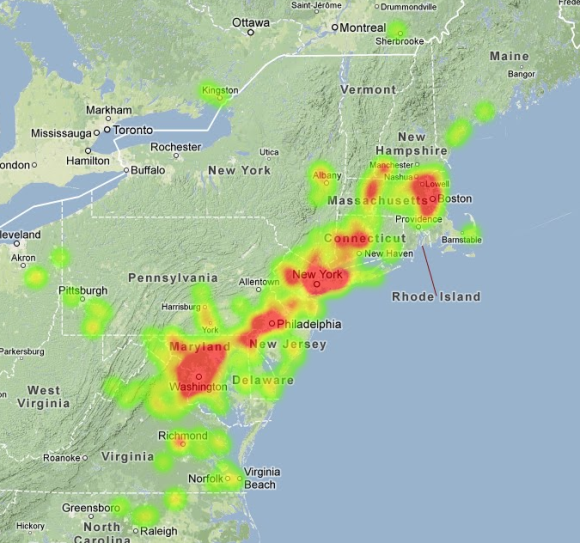 This is what the American Meteor Society (AMS) calls a “heat map.” It’s a compilation of eye-witness reports of the March 22, 2013 meteor. Read more about the March 22 meteor from the AMS here.

Bill Cooke of NASA’s Meteoroid Environment Office, told The Associated Press that, based on the reports, it was a “single meteor event.” He said:

Judging from the brightness, we’re dealing with something as bright as the full moon. The thing is probably a yard across. We basically have (had) a boulder enter the atmosphere over the Northeast.

The video below is from a security camera in Thurmont, Maryland.

There were no reports of damage from the March 22 meteor. It was just over a month ago that a meteor exploded over Russia’s Ural mountains. That explosion, which occurred some 8-12 miles (14-20 kilometers) above ground, shattered windows in and around the city of Chelyabinsk, Russia and caused some 1,000 injuries, but thankfully no deaths. Scientists are now saying it was the most powerful meteor explosion in Earth’s atmosphere since the Tunguska event in 1908.

This next video comes from security camera footage uploaded by CBS WUSA 9.

Astronomers sometimes use the word bolide to describe an exceptionally bright fireball such as this one, especially if it makes a sound (no reports so far of sound from this one, that we know of). The term bolide comes the Greek word bolis, meaning a missile or to flash. Bright meteors are seen pretty often, if you consider the whole Earth. In 2012, bright meteors or bollides were seen in the U.K. and New Zealand, and over San Francisco on October 17. So they are not uncommon.

However, from any one spot on Earth, they are uncommon, Among astronomers, it’s sometimes said you might witness one bolide, or very bright fireball, in your lifetime. So if you saw this one, this was yours!

If you observed it, you might want to tell someone what you saw. Here’s a place to report your meteor sighting. 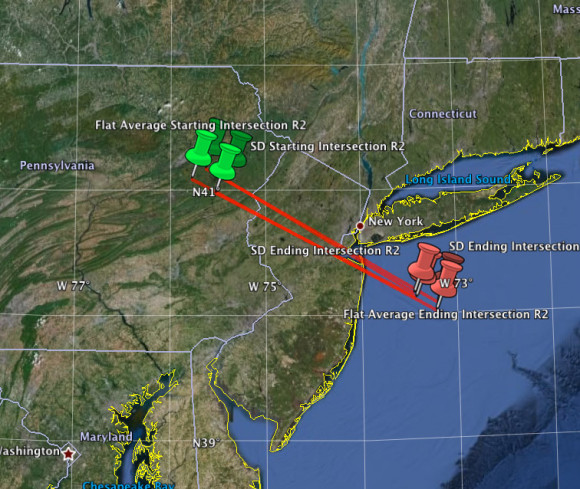 Here’s an estimated trajectory model for the March 22, 2013 meteor. This model is calculated by computing the intersection points of each witness with all other witnesses. The points are then averaged for the starting and ending points of the meteor. Via American Meteor Society.

Bottom line: Many across the U.S. East on March 22, 2013 saw a very bright meteor streak across the night sky. It was a rock from space – probably about one meteor across – that vaporized in Earth’s atmosphere.