Merging galaxies in Eridanus, via Hubble 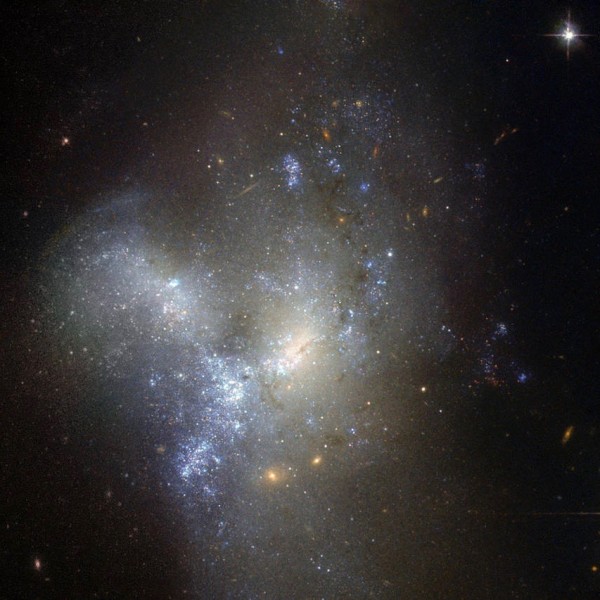 The constellation Eridanus the River is a faint, winding – and very beautiful – star pattern visible at this time of year. Hidden within its boundaries is this object – a peculiar galaxy known as NGC 1487 – lying about 30 million light-years away. NASA said:

Rather than viewing a celestial object, it is actually better to think of this as an event.

Here, we are witnessing two or more galaxies in the act of merging together to form a single new galaxy. Each progenitor has lost almost all traces of its original appearance, as stars and gas have been thrown hither and thither by gravity in an elaborate cosmic whirl. Unless one is very much bigger than the other, galaxies are always disrupted by the violence of the merging process.

As a result, it is very difficult to determine precisely what the original galaxies looked like and, indeed, how many of them there were.

In this case, it is possible that we are seeing the merger of several dwarf galaxies that were previously clumped together in a small group. Although older yellow and red stars can be seen in the outer regions of the new galaxy, its appearance is dominated by large areas of bright blue stars, illuminating the patches of gas that gave them life.

This burst of star formation may well have been triggered by the merger.