Is something unpredicted going on in the depths of space? 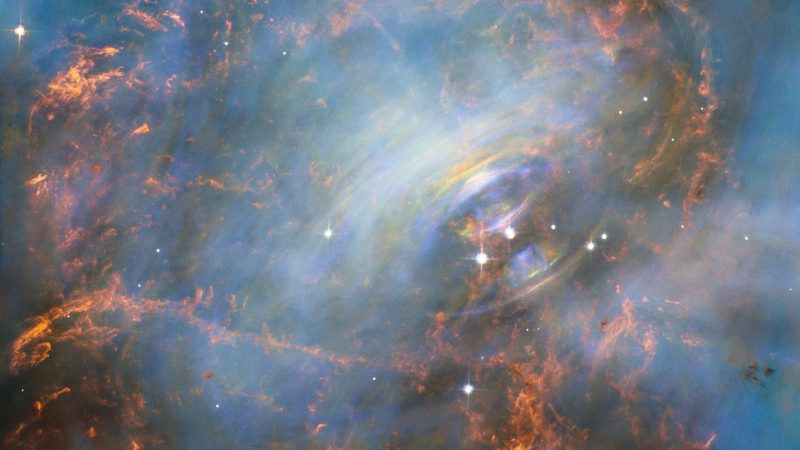 Peering deep into the core of the Crab Nebula, this close-up image reveals the beating heart of one of the most historic and intensively studied remnants of a supernova, an exploding star. Celestial bodies like supernovae helped Riess’s team of astronomers gauge distances to determine how quickly the universe is expanding. Image via Space Telescope Science Institute.

Here’s the good news: Astronomers have made the most precise measurement to date of the rate at which the universe is expanding since the Big Bang.

Here’s the possibly unsettling news: The new numbers remain at odds with independent measurements of the early universe’s expansion, which could mean that there is something unknown about the makeup of the universe.

Is something unpredicted going on in the depths of space?

Adam Riess is a Nobel Laureate and Bloomberg Distinguished Professor at Johns Hopkins University. He said:

The community is really grappling with understanding the meaning of this discrepancy.

Riess leads a team of researchers using the Hubble Space Telescope to measure the expansion rate of the universe. He shared a Nobel Prize in 2011 for the discovery of the accelerating universe. 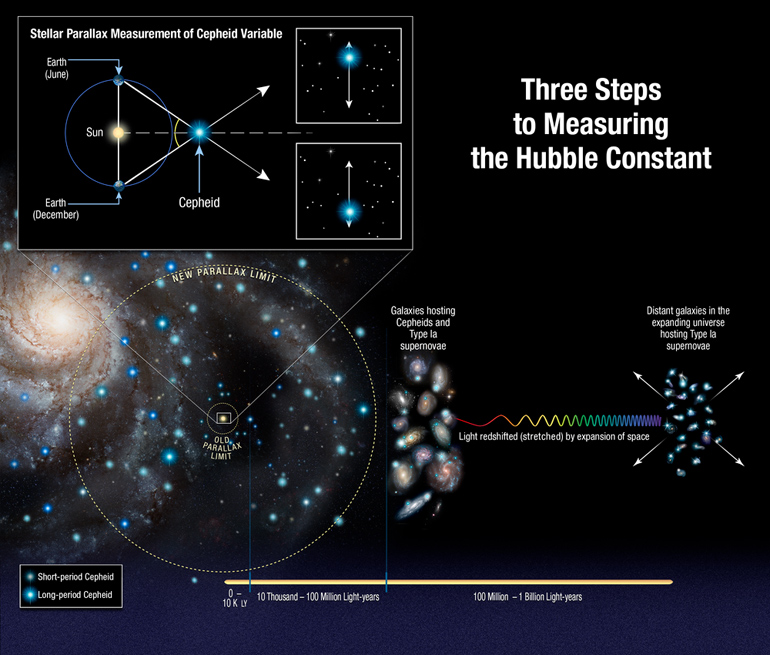 The Hubble data are so precise that astronomers cannot dismiss the gap between the two results as errors in any single measurement or method. Riess explained:

Both results have been tested multiple ways. Barring a series of unrelated mistakes, it is increasingly likely that this is not a bug but a feature of the universe.

Riess outlined a few possible explanations for the mismatch, all related to the 95 percent of the universe that is shrouded in darkness. One possibility is that dark energy, already known to be accelerating the cosmos, may be shoving galaxies away from each other with even greater – or growing – strength. This means that the acceleration itself might not have a constant value in the universe but changes over time.

Another idea is that the universe contains a new subatomic particle that travels close to the speed of light. Such speedy particles are collectively called “dark radiation” and include previously known particles like neutrinos, which are created in nuclear reactions and radioactive decays. Unlike a normal neutrino, which interacts by a subatomic force, this new particle would be affected only by gravity and is dubbed a “sterile neutrino.”

Yet another attractive possibility is that dark matter – an invisible form of matter not made up of protons, neutrons, and electrons – interacts more strongly with normal matter or radiation than previously assumed.

Any of these scenarios would change the contents of the early universe, leading to inconsistencies in theoretical models. These inconsistencies would result in an incorrect value for the Hubble constant, inferred from observations of the young cosmos. This value would then be at odds with the number derived from the Hubble observations.

Riess and his colleagues don’t have any answers yet to this vexing problem, but his team will continue to work on fine-tuning the universe’s expansion rate. So far the team, called the Supernova H0 for the Equation of State – nicknamed SH0ES – has decreased the uncertainty to 2.3 percent.

The team has been successful in refining the Hubble constant value by streamlining and strengthening the construction of the cosmic distance ladder, a series of interlinked measuring techniques that allow astronomers to gauge distances across billions of light-years.

Astronomers can’t use a tape measure to gauge the distances between galaxies – instead, they use special classes of stars and supernovae as cosmic yardsticks or milepost markers to precisely measure galactic distances.

Among the most reliable used to measure shorter distances are Cepheid variables, which are pulsating stars that brighten and dim at specific rates. Some distant galaxies contain another reliable yardstick, exploding stars called Type Ia supernovae, which flare with uniform brightness and are brilliant enough to be seen from relatively farther away. Using a basic tool of geometry called parallax, which measures the apparent shift of an object’s position due to a change in an observer’s point of view, astronomers can measure the distances to these celestial bodies independent of their brightness.

To measure parallax with Hubble, Riess’s team had to gauge the apparent tiny wobble of the Cepheids due to Earth’s motion around the sun. These wobbles are the size of just 1/100 of a single pixel on the telescope’s camera, which is roughly the apparent size of a grain of sand seen 100 miles (160 km) away.

To ensure the accuracy of the measurements, the astronomers developed a clever method that was not envisioned when Hubble was launched in 1990. The researchers invented a scanning technique in which the telescope measured a star’s position a thousand times a minute every six months for four years. The telescope slowly slews across a stellar target and captures the image as a streak of light. Riess said:

This method allows for repeated opportunities to measure the extremely tiny displacements due to parallax. You’re measuring the separation between two stars, not just in one place on the camera, but over and over thousands of times, reducing the errors in measurement.

Riess’s team compared the distances of galaxies in relation to Earth with the expansion of space measured by the stretching of light from receding galaxies, using the apparent outward velocity of galaxies at each distance to calculate the Hubble constant. Their goal is to further reduce the uncertainty by using data from Hubble and the European Space Agency’s Gaia space observatory, which will measure the positions and distances of stars with unprecedented precision.

Bottom line: Scientists measuring the universe’s rate of expansion say their new numbers remain at odds with independent measurements of the early universe’s expansion, which could mean that there is something unknown about the makeup of the universe.