Posted by Deborah Byrd and Eddie Irizarry in Space | October 3, 2018

Japan’s Hayabusa2 spacecraft deployed the MASCOT lander to asteroid Ryugu yesterday. Now, MASCOT has returned its 1st image. An international team of engineers and scientists in Germany is standing by. 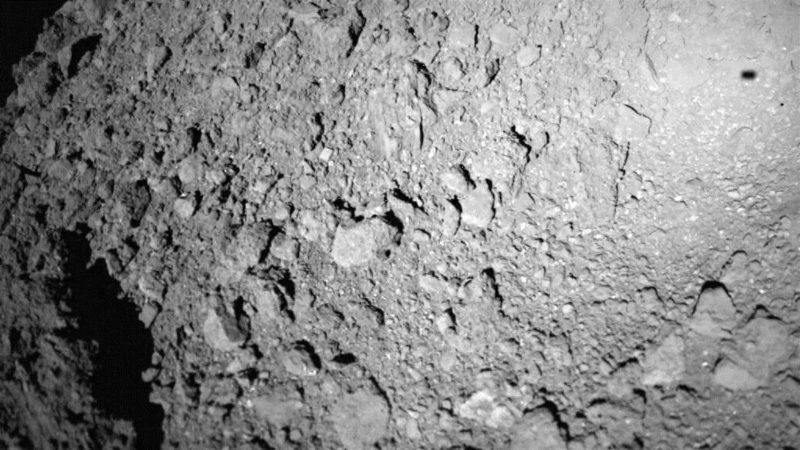 View larger. | The MASCOT lander captured this image of asteroid Ryugu while descending to the asteroid’s surface on October 3, 2018. The lander’s shadow is visible in the upper right. Image via DLR.

The German Aerospace Center (DLR) reported today (October 3, 2018) that the near-Earth asteroid Ryugu, located approximately 200 million miles (300 million km) from Earth, has a new inhabitant which has returned its first image. The Mobile Asteroid Surface Scout (MASCOT) – built by the space agencies of France and Germany – has landed on the asteroid’s surface and begun its work. DLR said the lander successfully separated from the Japanese Hayabusa2 space probe at 03:58 Central European Summer Time (UTC+2; translate UTC to your time). The 16 hours in which the lander will conduct measurements on the asteroid’s surface have begun for the international team of engineers and scientists.

Hello #Earth, hello @haya2kun! I promised to send you some pictures of #Ryugu so here’s a shot I took during my descent. Can you spot my shadow? #AsteroidLanding pic.twitter.com/dmcilFl5ms

Wow! Ryugu is so dark that I had trouble orienting myself. I had to use my swing arm to relocate so I could continue collecting scientific data… Much better now! #AsteroidLanding

The newly released image shows the tiny asteroid (about .6 miles or 1 km) in great detail, as well as MASCOT’s shadow on the top right of the photo. The Japanese Space Agency’s Hayabusa2 began its descent towards Ryugu on October 2. MASCOT was ejected at an altitude of 167 feet (51 meters) and descended in free fall – slower than an earthly pedestrian – to the asteroid. MASCOT came to rest on the surface approximately 20 minutes after the separation. Although it is basically square and does not have wheels, MASCOT has an internal mechanism allowing it to make a jump in the asteroid’s very low gravity to reposition itself if needed. 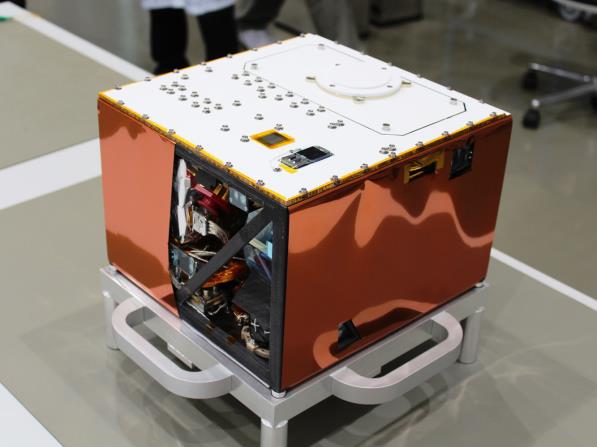 The MASCOT lander before launch. Image via JAXA.

The relief about the successful separation and subsequent confirmation of the landing was clearly noticeable In the MASCOT Control Center at DLR. 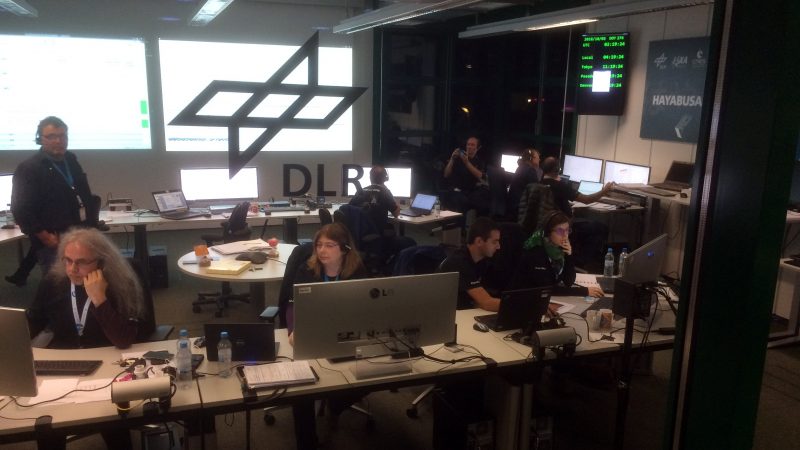 The scene at the DLR control room in Cologne, Germany, for the MASCOT lander. Image via DLR.

It could not have gone better. From the lander’s telemetry, we were able to see that it separated from the mothercraft, and made contact with the asteroid surface approximately 20 minutes later.

The team is now in contact with the lander, DLR said, adding:

The moment of separation was one of the risks of the mission: If MASCOT had not successfully separated from Hayabusa2 as planned and often tested, the lander’s team would hardly have had the opportunity to solve this problem. But everything went smoothly: Already during the descent on the asteroid, the camera switched MASCAM on and took 20 pictures, which are now stored on board the Japanese space probe.

The camera worked perfectly. The team’s first images of the camera are therefore safe.

The team reported it is now analyzing the data that MASCOT is sending to Earth. 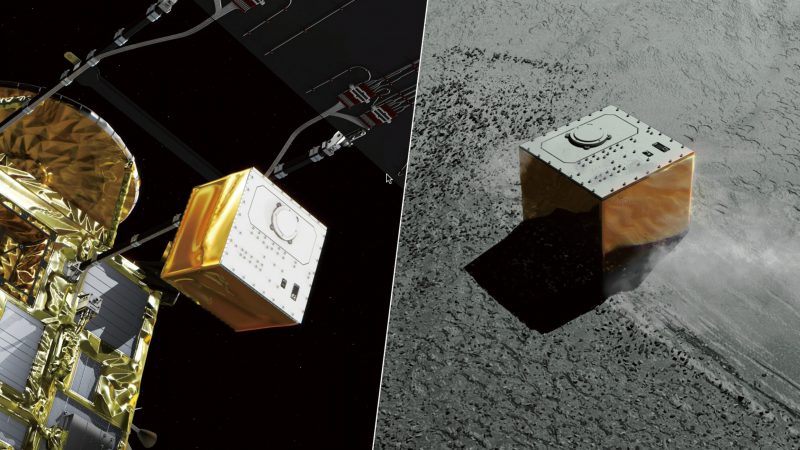