Posted by Eleanor Imster and Deborah Byrd in Space | November 26, 2016

Water ice can’t persist on Mars surface in the region of Utopia Planitia, about halfway from Mars’ equator to its pole. But researchers say there’s water in a vast frozen lake underground. 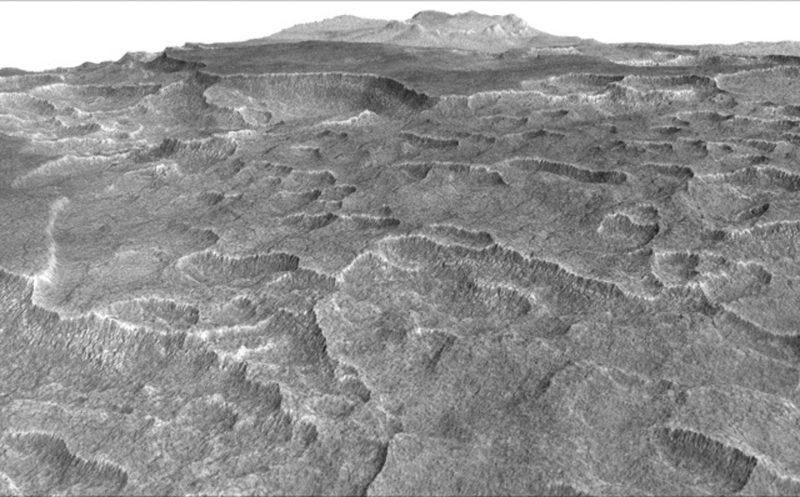 This vertically exaggerated view shows scalloped depressions in a part of Mars where such textures prompted researchers to check for buried ice, using ground-penetrating radar aboard NASA’s Mars Reconnaissance Orbiter. Image via NASA/JPL-Caltech/Univ. of Arizona

Water ice makes up half or more of an underground layer in a large region of Mars about halfway from the equator to the planet’s north pole, scientists say. The amount of water in this deposit is about as much as in Lake Superior, which holds 10 percent of Earth’s surface fresh water and by volume is Earth’s third-largest lake, behind Lake Baikal in Siberia and Lake Tanganyika in eastern Africa. A radar aboard NASA’s Mars Reconnaissance Orbiter assessed the amount of water present. The research was published September 26, 2016 in the journal Geophysical Research Letters.

The presence of water underground in this region may have implications for future human explorations of Mars.

Scientists used data from a ground-penetrating radar instrument on the Mars Reconnaissance Orbiter to examine part of a region on Mars called Utopia Planitia – translated loosely as the “plains of paradise” – in the planet’s mid-northern latitudes. According to a NASA statement:

Analyses of data from more than 600 overhead passes with the onboard radar instrument reveal a deposit more extensive in area than the state of New Mexico. The deposit ranges in thickness from about 260 feet (80 meters) to about 560 feet (170 meters), with a composition that’s 50 to 85 percent water ice, mixed with dust or larger rocky particles.

Today, water ice can’t persist on the Martian surface at the latitude of this deposit – about halfway from the equator to the pole – because the planet’s thin, dry atmosphere would turn it into water vapor. The Utopia deposit is shielded from the atmosphere by a soil covering that scientists estimate is about 3 to 33 feet (1 to 10 meters) thick. 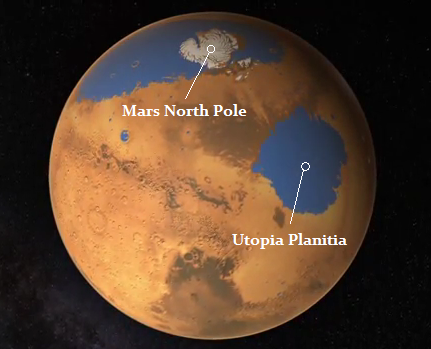 Cassie Stuurman of the Institute for Geophysics at the University of Texas, Austin, is study’s lead author. She said in a statement:

This deposit probably formed as snowfall accumulating into an ice sheet mixed with dust during a period in Mars history when the planet’s axis was more tilted than it is today.

The newly surveyed ice deposit represents less than one percent of all known water ice on Mars, but it more than doubles the volume of thick, buried ice sheets known in the northern plains. Ice deposits close like this that are close surface are being considered as a resource for astronauts. Jack Holt of the University of Texas is a paper co-author. Holt said:

This deposit is probably more accessible than most water ice on Mars, because it is at a relatively low latitude and it lies in a flat, smooth area where landing a spacecraft would be easier than at some of the other areas with buried ice.

It’s important to expand what we know about the distribution and quantity of Martian water. We know early Mars had enough liquid water on the surface for rivers and lakes. Where did it go? Much of it left the planet from the top of the atmosphere. Other missions have been examining that process. But there’s also a large quantity that is now underground ice, and we want to keep learning more about that.

Joe Levy of the University of Texas is a co-author of the study. He said:

The ice deposits in Utopia Planitia aren’t just an exploration resource, they’re also one of the most accessible climate change records on Mars. We don’t understand fully why ice has built up in some areas of the Martian surface and not in others. Sampling and using this ice with a future mission could help keep astronauts alive, while also helping them unlock the secrets of Martian ice ages.

Diagonal striping on this map of a portion of Mars’ Utopia Planitia region indicates the area of a large subsurface deposit rich in water ice. The area is about the size of the U.S. state of New Mexico. Image via NASA/JPL-Caltech/Univ. of Rome/ASI/PSI

Bottom line: A new study using data from NASA’s Mars Reconnaissance Orbiter, published September 26, 2016 in the journal Geophysical Research Letters says that water ice makes up half or more of an underground layer in a large region of the planet Mars.