These images from the Mars Express spacecraft show an ancient, dried-up river system, one of the longest valley networks on Mars. 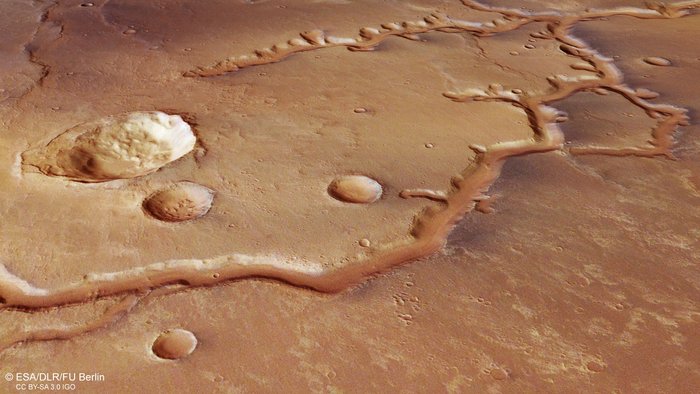 View larger. | Nirgal Vallis, a dried-up river valley on Mars. This oblique perspective view was generated using a digital terrain model and Mars Express data gathered in November, 2018 during the spacecraft’s orbit #18818. Read more about this image, which is via ESA/DLR/FU Berlin.

The new images on this page – released October 10, 2019 – are from the European Space Agency’s Mars Express spacecraft. They show an ancient, dried-up river system – called Nirgal Vallis by Earth’s space scientists – stretching for nearly 435 miles (700 km) across Mars’ surface. It’s one of the longest valley networks on this neighboring world. The area lies just south of the planet’s equator, and scientists think it was shaped by a mix of flowing water and impacts by rocks from space smashing into the Martian surface.

You can see evidence of both of these mechanisms in these images. For example, in the images below, see the impact craters, some large and some small, on Mars’ surface. A tree-like, forked channel cuts prominently through the center of the frame.

All of these images cover a part of the Martian surface centered at about 315 degrees east longitude/27 degrees south latitude. North is to the right.

The dried-up river valley on Mars named Nirgal Vallis. This image – and the 2 below – are from ESA’s Mars Express, using data gathered on November 16, 2018, during orbit #18818 of Mars Express. The ground resolution is approximately 14 meters per pixel and the images are centered at about 315 degrees east longitude/27 degrees south latitude. This image was created using data from the nadir and color channels of the High Resolution Stereo Camera. The nadir channel is aligned perpendicular to the surface of Mars, as if looking straight down at the surface. Image via ESA/DLR/FU Berlin.

View larger. | This color-coded topographic view shows a dried-up river valley on Mars named Nirgal Vallis. In this image, lower parts of the surface are shown in blues and purples, while higher altitude regions show up in whites, yellows, and reds, as indicated on the scale to the top right. Read more about this image, via ESA/DLR/FU Berlin.

Here’s Nirgal Vallis again. If you’ve got 3D red-green or red-blue glasses, check out this image. This anaglyph was derived from data obtained by the nadir and stereo channels of the High Resolution Stereo Camera on ESA’s Mars Express during spacecraft orbit #18818. Image via ESA/DLR/FU Berlin.

According to a statement from ESA:

Nirgal Vallis is a typical example of a feature known as an amphitheater-headed valley. As the name suggests, rather than ending bluntly or sharply, the ends of these tributaries have the characteristic semi-circular, rounded shape of an ancient Greek amphitheater. Such valleys also typically have steep walls, smooth floors, and, if sliced through at a cross-section, adopt a ‘U’ shape. The valleys pictured here are about 200 meters (656 feet) deep and 2 kilometers (1.2 miles) wide, and their floors are covered in sandy dunes; the appearance of these dunes indicates that Martian winds tend to blow roughly parallel to the valley walls.

We see valleys like this often on Earth, including valleys found in the Chilean Atacama Desert, the Colorado Plateau, and on the islands of Hawaii. Mars also hosts a few of them, with Nanedi Valles and Echus Chasma joining Nirgal Vallis as clear examples of this intriguing feature. Both of these features also resemble terrestrial drainage systems, where meandering, steep-sided valleys – thought to have been formed by free-flowing water – have carved their way through hundreds of kilometers of Martian rock, forging through old volcanic plains, lava flows, and material deposited by strong Martian winds over time.

Scientists say that valleys such as Nirgal Vallis, which are ubiquitous in the low-latitude regions surrounding the Martian equator, indicate that these areas once experienced a far milder, wetter and more Earth-like climate. 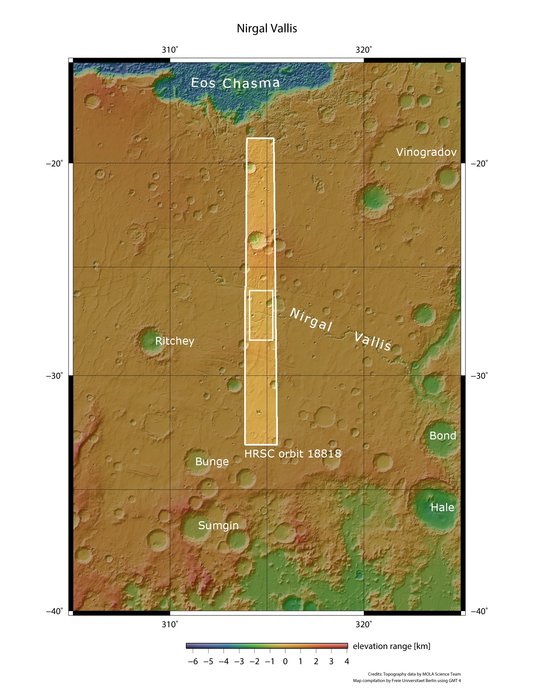