Vast areas of Mars’ nightside atmosphere glow and pulsate with ultraviolet light, according to images from NASA’s MAVEN spacecraft.

Mars’ nightside atmosphere glows and pulsates in this data animation from MAVEN spacecraft observations. Green-to-white false color shows the enhanced brightenings of Mars’ ultraviolet “nightglow” measured by MAVEN’s Imaging UltraViolet Spectrograph at about 40 miles (70 km) altitude. A simulated view of the Mars globe is added digitally for context, with ice caps visible at the poles. Three nightglow brightenings occur over 1 Mars rotation, the 1st much brighter than the other 2. All 3 brightenings occur shortly after sunset, appearing on the left of this view of the night side of the planet. The pulsations are caused by downward winds which enhance a chemical reaction, creating nitric oxide which causes the glow. Months of data were averaged to identify these patterns, indicating they repeat nightly.

The MAVEN mission team was surprised to find that the atmosphere pulsed exactly three times per night, and only during Mars’ spring and fall. The new data also revealed unexpected waves and spirals over the winter poles, while also confirming earlier results from the Mars Express spacecraft that this nightglow was brightest over the winter polar regions.

This so-called “nightglow” would not be visible to an astronaut standing on Mars. That’s because ultraviolet light – although detectable by specialized instruments – is invisible to the human eye. Zac Milby, of University of Colorado’s Laboratory for Atmospheric and Space Physics, said in a statement:

The ultraviolet glow comes mostly from an altitude of about 70 kilometers (approximately 40 miles), with the brightest spot about a thousand kilometers (approximately 600 miles) across, and is as bright in the ultraviolet as Earth’s northern lights. Unfortunately, the composition of Mars’ atmosphere means that these bright spots emit no light at visible wavelengths that would allow them to be seen by future Mars astronauts. Too bad: the bright patches would intensify overhead every night after sunset, and drift across the sky at 300 kilometers per hour (about 180 miles per hour). 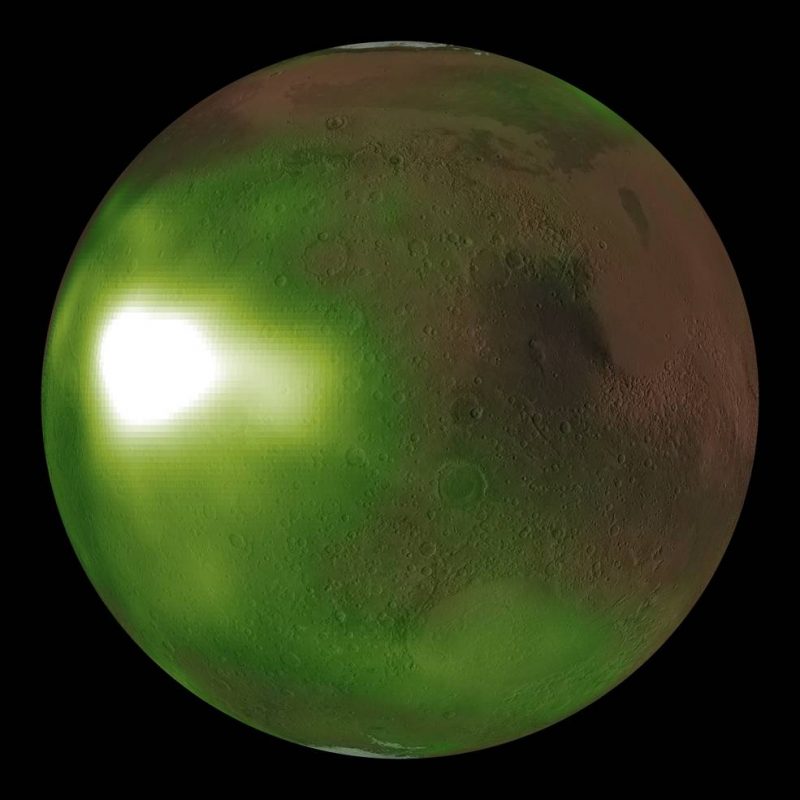 This is an image of the ultraviolet “nightglow” in the Martian atmosphere. Green and white false colors represent the intensity of ultraviolet light, with white being the brightest. The image shows an intense brightening in Mars’ nightside atmosphere. The brightenings occur regularly after sunset on Martian evenings during fall and winter seasons, and fade by midnight. The brightening is caused by increased downward winds which enhance a chemical reaction creating nitric oxide, which causes the glow. Image via NASA/ MAVEN/ Goddard Space Flight Center/ CU/ LASP.

The team found that Mars’ nightglow seems to be brightest at the height of the planet’s northern and southern winters, when hotter currents rush away from the equator and toward Mars’ poles.

University of Colorado’s Nick Schneider is instrument lead for the MAVEN Imaging Ultraviolet Spectrograph (IUVS) instrument that made these observations, and lead author of a paper on this research published August 6, 2020, in the peer-reviewed Journal of Geophysical Research, Space Physics. Schneider said:

The diagram explains the cause of Mars’ glowing nightside atmosphere. On Mars’ dayside, molecules are torn apart by energetic solar photons. Global circulation patterns carry the atomic fragments to the nightside, where downward winds increase the reaction rate for the atoms to re-form molecules. The downward winds occur near the poles at some seasons and in the equatorial regions at others. The new molecules hold extra energy which they emit as ultraviolet light. Image via NASA/ MAVEN/ Goddard Space Flight Center/ CU/ LASP.

The scientists say the pulsations reveal the importance of planet-encircling waves in the Mars atmosphere. The number of waves and their speed indicate that Mars’ middle atmosphere is influenced by the daily pattern of solar heating and disturbances from the topography of Mars’ huge volcanic mountains. These pulsating spots are the clearest evidence that the middle atmosphere waves match those known to dominate the layers above and below. 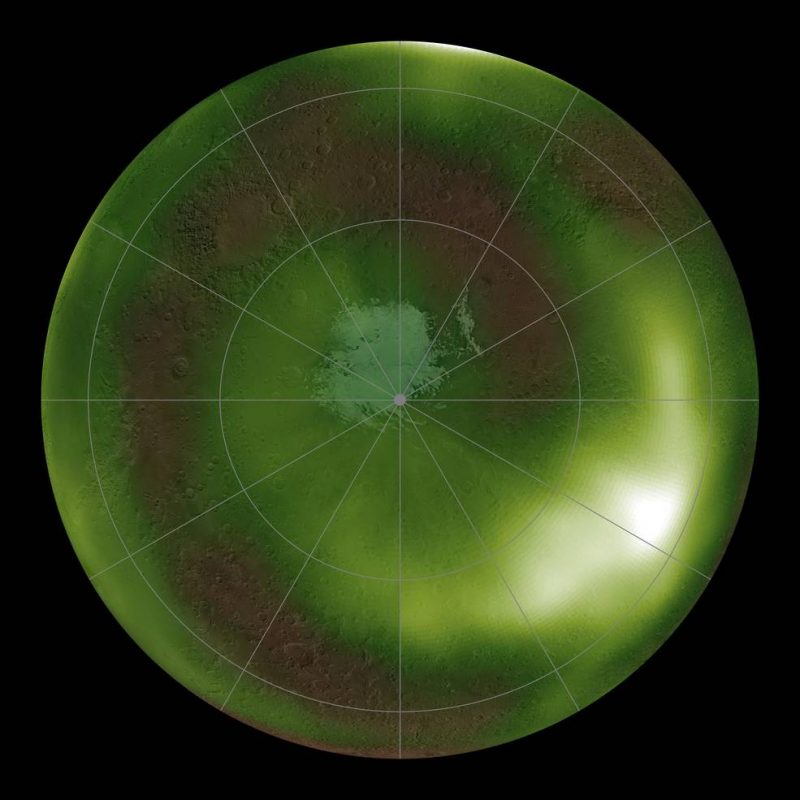 This is an image of the ultraviolet “nightglow” in the Martian atmosphere over the south pole. Green and white false colors represent the intensity of ultraviolet light, with white being the brightest. The nightglow was measured at about 40 miles (70 km) altitude by the Imaging UltraViolet Spectrograph instrument on NASA’s MAVEN spacecraft. A simulated view of the Mars globe is added digitally for context, and the faint white area in the center of the image is the polar ice cap. The image shows an unexpectedly bright glowing spiral in Mars’ nightside atmosphere. The cause of the spiral pattern is unknown. Image via NASA/ MAVEN/ Goddard Space Flight Center/ CU/ LASP.

MAVEN’s main discoveries of atmosphere loss and climate change show the importance of these vast circulation patterns that transport atmospheric gases around the globe and from the surface to the edge of space.

Here’s more about the MAVEN mission: