Mars has belts of glaciers

A thick layer of dust covers the Martian ice. Under the dust, there are glaciers made of frozen water. 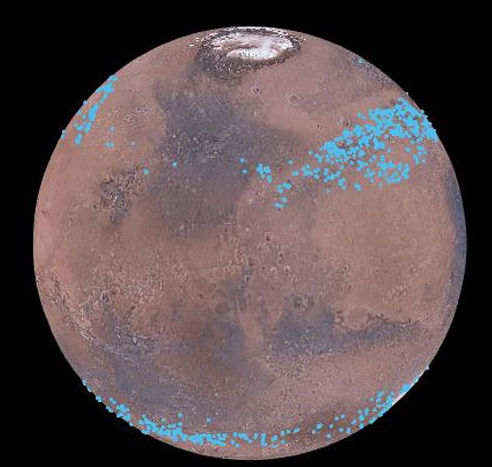 Mars has distinct polar ice caps, but new measurements suggest that Mars also has belts of glaciers at its central latitudes in both the southern and northern hemispheres. A thick layer of dust covers the glaciers. Image credit: Mars Digital Image Model, NASA/Nanna Karlsson

Mars is known to have distinct polar ice caps, but new measurements suggest that the planet also has belts of glaciers at its central latitudes in both the southern and northern hemispheres.

A thick layer of dust covers the glaciers, so they look like the Martian ground. But radar measurements show that underneath the dust, there are glaciers composed of frozen water. New studies have now calculated the size of the glaciers and suggest the amount of water in the glaciers is the equivalent of all of Mars being covered by more than one meter of ice. The results appear in the March 18 issue of Geophysical Research Letters.

Researchers have been able to observe the shape of glaciers just below the surface by studying images from the several satellites that orbit Mars, but they were unsure whether the ice was made of frozen water (H2O) or of carbon dioxide (CO2), or whether it was mud.

Using radar measurements from the NASA satellite, Mars Reconnaissance Orbiter, researchers have been able to determine that is water ice. A group of researchers at the Niels Bohr Institute have calculated the thickness of the ice using radar observations combined with ice flow modeling. 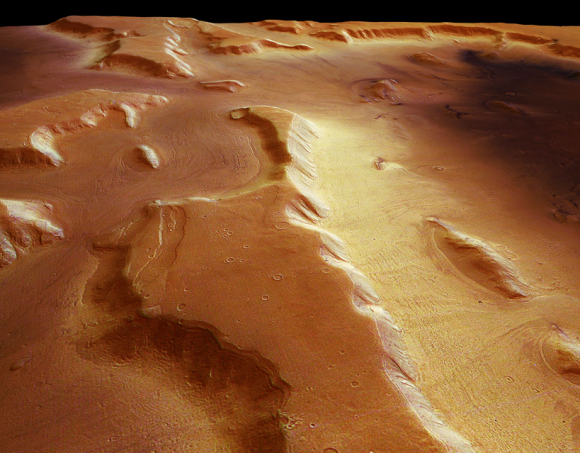 This image from the High Resolution Stereo Camera on ESA’s Mars Express spacecraft shows that a thick layer of dust covers the glaciers. Radar measurements show that there are glaciers composed of frozen water underneath the dust. Image credit: ESA/DLR/FU Berlin.

Nanna Bjørnholt Karlsson is a postdoc at the Centre for Ice and Climate at the Niels Bohr Institute at the University of Copenhagen. Karlsson said:

We have looked at radar measurements spanning ten years back in time to see how thick the ice is and how it behaves. A glacier is after all a big chunk of ice and it flows and gets a form that tells us something about how soft it is. We then compared this with how glaciers on Earth behave and from that we have been able to make models for the ice flow

Nanna Bjørnholt Karlsson explained that earlier studies have identified thousands of glacier-like formations on the planet. The glaciers are located in belts around Mars between the latitudes 300-500 – equivalent to just south of Denmark’s location on Earth. The glaiciers are found on both the northern and southern hemispheres.

From some locations on Mars, researchers have detailed high-resolution data, but while more sparse data from other areas. But by supplementing the sparse data with information about the flow and form of the glaciers from the well-studied areas, they have been able to calculate how thick and voluminous the ice is across the glacier belts.

We have calculated that the ice in the glaciers is equivalent to over 150 billion cubic meters of ice – that much ice could cover the entire surface of Mars with 1.1 meters of ice. The ice at the mid-latitudes is therefore an important part of Mars’ water reservoir.