A giant dust storm is raging on Mars

One of the thickest dust storms ever seen on Mars has been spreading since early June. The Opportunity rover – 1 of 2 active rovers on Mars – has suspended science operations. 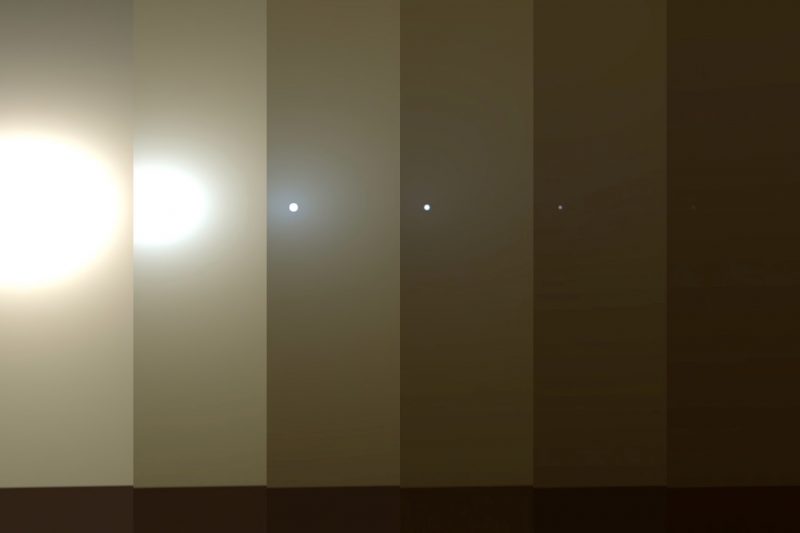 View larger. | This series of images shows simulated views of a darkening Martian sky blotting out the sun from the solar-powered Opportunity rover’s point of view. The far right image simulates Opportunity’s current view in the global dust storm (June 2018). Image via NASA/JPL-Caltech/TAMU.

Astronomers expected dust storms to kick up on the planet Mars sometime this year. That’s because such storms typically occur in years when Mars is near its perihelion, or closest point to the sun, an event that happens every 687 Earth-days as Mars orbits the sun. The next Mars perihelion will be September 16, 2018. Then Mars – whose orbit is much more elliptical than that of Earth – will be receiving 40% more sunlight than when the planet is farthest from the sun. But already a dust storm is raging on Mars. Scientists who’ve been tracking it since at least early June said in a statement that it’s:

… one of the thickest dust storms ever observed on Mars … The storm has caused NASA’s Opportunity rover to suspend science operations.

The dust storm is raging above and around Opportunity, which is solar powered, and NASA has not heard from the rover since Tuesday. The dust won’t topple the rover, but it has hidden the sun, creating what Mars Exploration Rover project manager John Callas said at a Wednesday media telecon was a “spacecraft emergency.” Callas said his team was assuming the charge in Opportunity’s batteries has dipped below 24 volts. If so, the rover has entered a low-power fault mode, when all subsystems except the mission clock are turned off.

So Opportunity’s fate is unknown at this time, although there’s some possibility the rover might be able to wait it out.

Meanwhile, the dust storm is still growing. In fact, it now blankets some 14 million square miles (35 million square km) of Martian surface — about a quarter of the planet, NASA said, adding:

Dust storms are a frequent feature on Mars, occurring in all seasons. Occasionally, they can balloon into regional storms in a matter of days, and sometimes even expand until they envelop the planet. These massive, planet-scaled storms are estimated to happen about once every three to four Mars years (six to eight Earth years); the last one was in 2007. They can last weeks, or even months at the longest …

The thin atmosphere makes these storms vastly different from anything encountered on Earth: Despite the drama of “The Martian”, the most powerful surface winds encountered on Mars would not topple a spacecraft, although they can sand-blast dust particles into the atmosphere.

View larger. | The Curiosity rover has also begun to see an increase in dust at its location in Gale Crater. These two views from Curiosity show that dust has increased over 3 days from the ongoing dust storm. The left-hand image shows a view of the east-northeast rim of Gale Crater on June 7 (Sol 2074); the right-hand image shows a view of the same feature on June 10 (Sol 2077). Image via NASA/JPL-Caltech/MSSS.

This is the ideal storm for Mars science. We have a historic number of spacecraft operating at the red planet. Each offers a unique look at how dust storms form and behave – knowledge that will be essential for future robotic and human missions.

NASA has three orbiters circling the red planet, each equipped with special cameras and other atmospheric instruments. And it has two operating rovers on Mars’ surface, if you count Opportunity. The other rover, Curiosity, has a nuclear-powered battery. That means it doesn’t face the same risk as the solar-powered Opportunity.

Other nations have spacecraft at Mars as well. I’m counting eight total current missions at Mars at Wikipedia’s list of missions to Mars page, with a ninth mission, Insight Mars, launched as recently as May 5 and heading for a November 2018 landing on Mars. 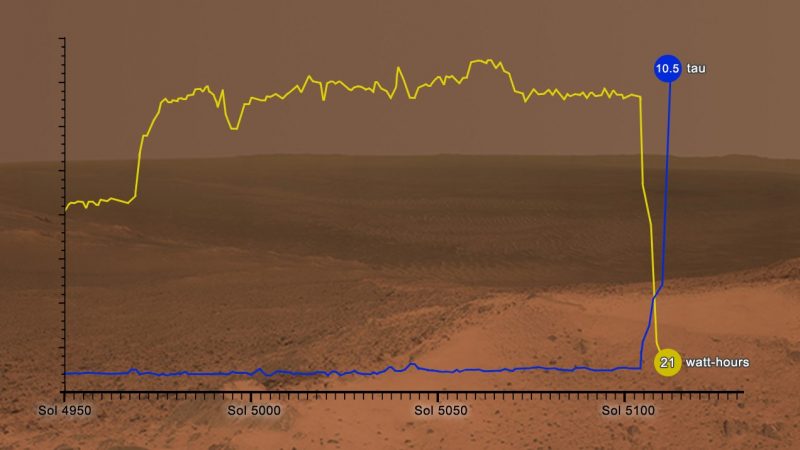 This graphic shows how the energy available to NASA’s Opportunity rover on Mars (in watt-hours) depends on how clear or opaque the atmosphere is (measured in a value called tau). When the tau value (blue) is high, the rover’s power levels (yellow) drop. Since the storm began two weeks ago, the amount of light Opportunity receives has dropped to less than 1 percent of normal levels. Energy production has fallen from hundreds of watt-hours a day to almost nothing. Image via NASA/JPL-Caltech/New Mexico Museum of Natural History.

Since 2007, Mars scientists have been patiently waiting for a planet-encircling dust event – less precisely called a “global” dust storm, though the storms never truly cover the entire globe of Mars. In 1971, one of these storms came close, leaving just the peaks of Mars’ Tharsis volcanoes poking out above the dust.

The most recent dust storm is the earliest ever observed in the northern hemisphere of Mars, said Bruce Cantor of Malin Space Science Systems, deputy principal investigator for the Mars Color Imager. But it could take several more days before anyone can tell whether the storm is encircling the planet.

If it does “go global,” the storm will offer a brand new look at Martian weather. Four [NASA] spacecraft stand ready to collect the science that shakes out.

Read more from NASA about science during Mars dust storms

Click here for updates about the Martian dust storm

This set of images from NASA’s Mars Reconnaissance Orbiter shows a fierce dust storm is kicking up on Mars, with rovers on the surface indicated as icons. Image via NASA/JPL-Caltech/MSSS.

Bottom line: A giant dust storm has been building on Mars throughout June 2018, and now covers a quarter of the planet. The Opportunity rover has suspended science operations.