The Mars Express orbiter has taken some stunning photos of Korolev Crater, an ice-filled crater near the Martian north pole. It looks from a distance like a snowy winter landscape on Earth. 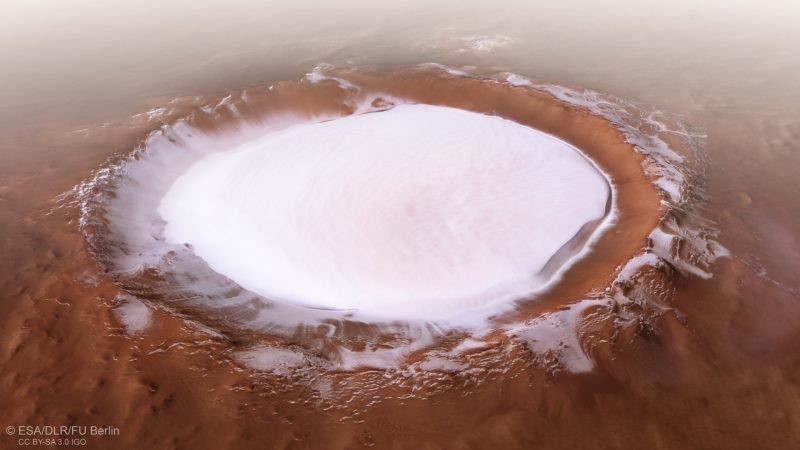 A stunning perspective view of the ice-filled Korolev Crater, as seen by Mars Express. Image via ESA/DLR/FU Berlin/BY-SA 3.0 IGO.

Mars is famous for its polar ice caps – composed of both water ice and carbon dioxide ice – which stand out starkly against the surrounding rust-colored terrain. But plentiful ice can be found outside of Mars’ main ice caps as well, including underground. One image in particular shows a beautiful example of such a Martian icy landscape – an “ice pond” in a crater near the north pole – very fitting for this time of year in the northern hemispheres of both Earth and Mars. That’s right … it’s winter in Mars’ northern hemisphere now, too. The Martian northern winter solstice came on October 16, 2018 (Mars seasonal calendar here).

The European Space Agency (ESA) acquired the image at top, and several other images on this page, via its Mars Express orbiter. The one above shows what at first looks like a scenic view of an untouched patch of Martian snow, but the brilliantly white feature is actually water ice, filling Mars’ Korolev Crater. The roundish mound of ice is captured in exquisite detail; notice the smaller patches of ice filling in crevices on the rugged edge of the crater rim. ESA posted the image on December 20, 2018.

Korolev Crater is about 51 miles (82 km) across and is located in the northern lowlands of Mars, just south of Olympia Undae – an expanse of dune-filled terrain that partially surrounds the north pole. The image shows a stunning oblique view of the crater, composed of five different “strips” combined to form a larger single image. Each strip was obtained during a different orbit by Mars Express. There are also context and topographic views of the crater. 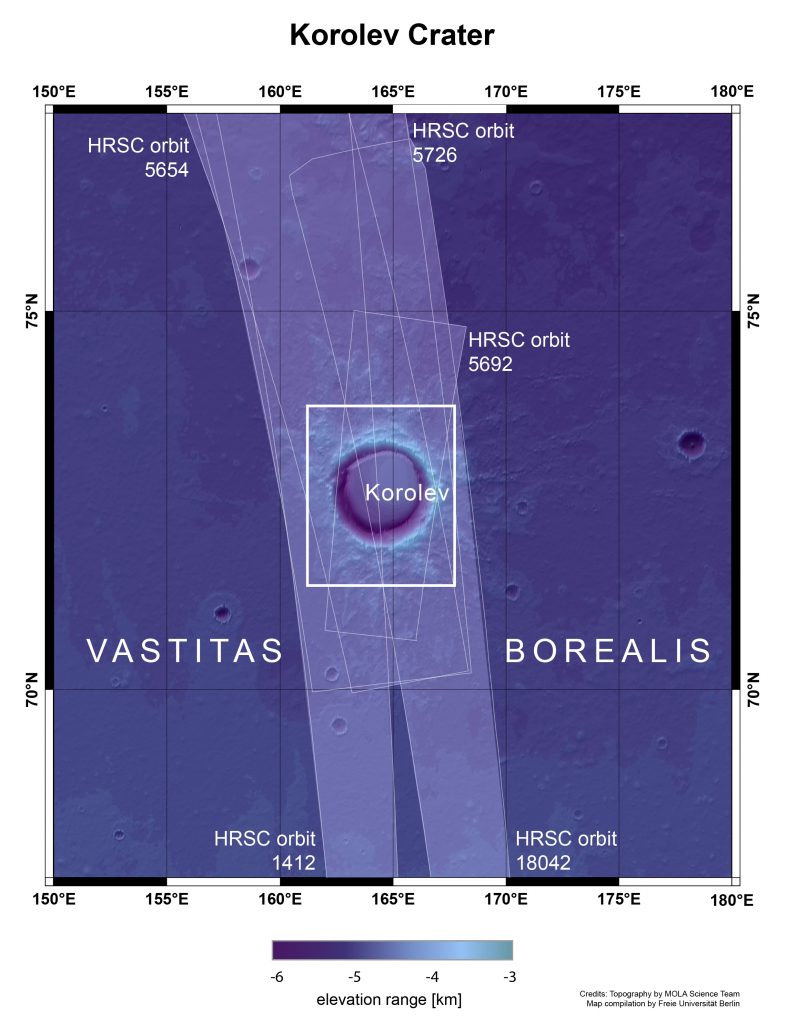 The ice that fills the crater largely persists year-round – the central mound of ice maintains a thickness of 1.1 miles (1.8 km). The crater acts as a cold trap, where the air cools down and sinks as it moves over the ice deposit, creating a layer of cold air that sits directly above the ice itself. That cold layer keeps the ice stable and prevents it from evaporating or sublimating. The crater itself is quite deep, with the crater floor lying some 1.2 miles (2 km) beneath the crater rim.

Korolev Crater was also recently imaged – partially – by ESA’s Trace Gas Orbiter (TGO), part of the ExoMars mission. TGO arrived at Mars last spring, and is designed to search the Martian atmosphere for trace gases – tiny amounts of certain gases such as methane.

Ice is common on Mars – both on the surface and in the subsurface – including both water ice and carbon dioxide ice. NASA’s Phoenix lander dug into the frozen surface near the north pole back in 2008 and sampled some of the water ice directly, just a few inches below the surface. Phoenix also observed snow falling high up in the atmosphere, although it didn’t reach the ground. So there is snow on Mars as well, but it never accumulates enough to go skiing or sledding, unfortunately. On the other hand, ice-filled craters like Korolev might make somewhat-ideal skating rinks for some future Martian settlers! 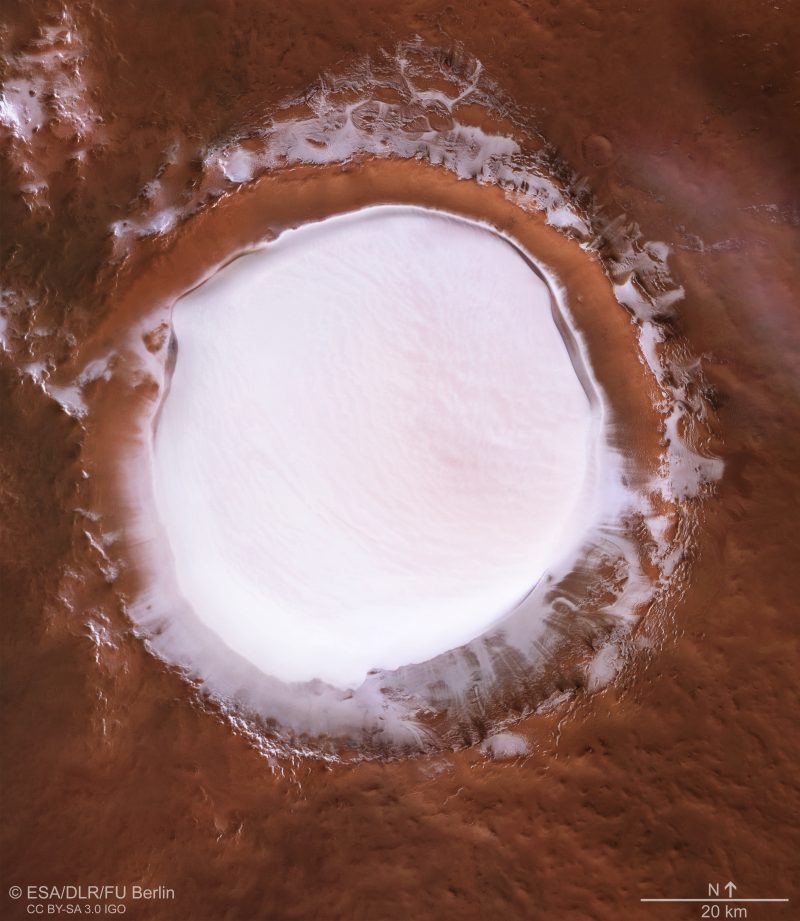 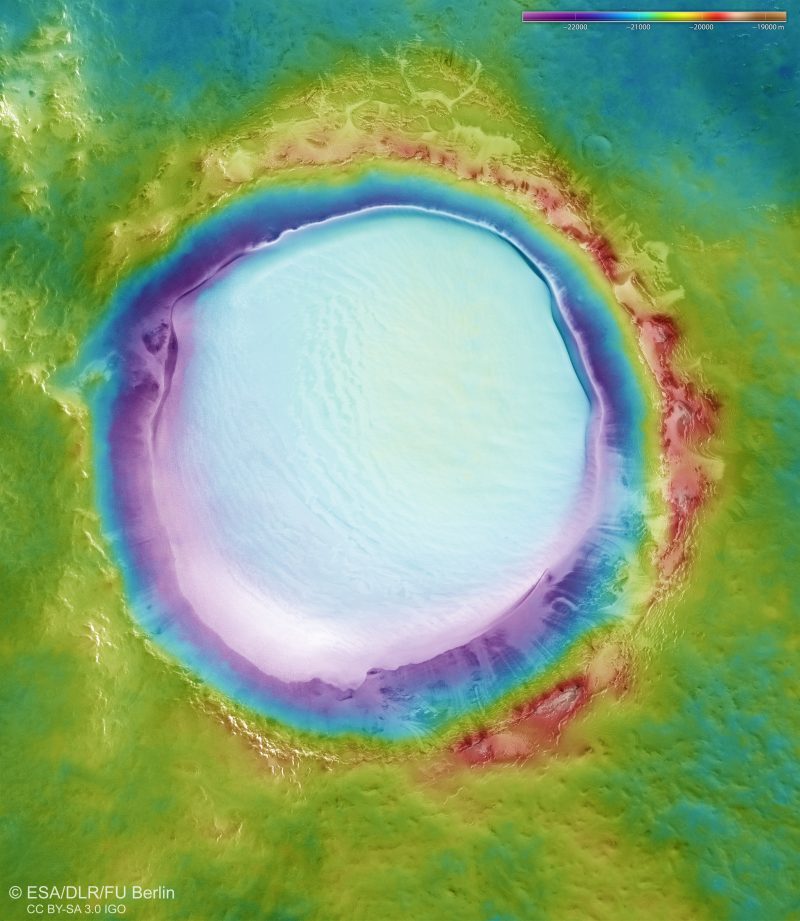 Color-coded image showing the topography of Korolev Crater. Lower parts of the surface are shown in blues and purples, while higher-altitude regions are shown in whites, browns and reds, as indicated on the scale to the top right. Image via ESA/DLR/FU Berlin/CC BY-SA 3.0 IGO.

Part of the rim of Korolev Crater, as seen by the Colour and Stereo Surface Imaging System (CaSSIS) on Mars Express. Image via ESA/Roscosmos/CaSSIS.

Korolev Crater was named after Sergei Korolev, a chief rocket engineer and spacecraft designer who was dubbed the father of Soviet space technology.

Mars Express was launched way back in 2003 and entered Mars orbit on December 25 of the same year – 15 years ago this week!

More information about Mars Express is available on the mission website.

Bottom line: The “frozen pond” in Korolev Crater is a beautiful example of how the cold, icy terrain on Mars can be reminiscent of similar places on Earth –  a Martian winter wonderland.