Boom! Bam! Boom! How to make a triple crater on Mars

Like many worlds in our solar system, Mars has prominent impact craters. A particularly unusual example is shown in this new image from ESA’s Mars Express: an ancient triplet composed of 3 overlapping craters. 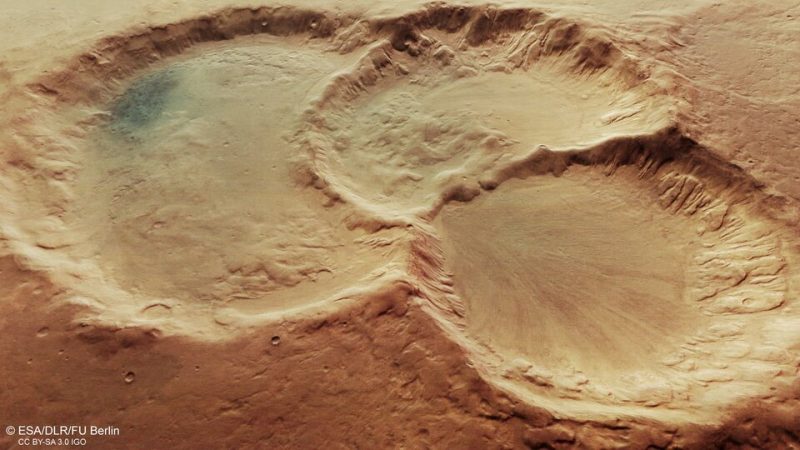 ESA’s Mars Express spacecraft acquired this image of a triple crater on Mars on August 6, 2020. The largest measures about 28 miles (45 km) across, and the smallest about 17 miles (28 km). Image via ESA.

The European Space Agency (ESA) released the image above late last month (October 29, 2020), showing a triple crater in an especially old part of Mars’ southern hemisphere. This region on Mars – known as Noachis Terra – was heavily bombarded early in the history of our solar system, about 4 billion years ago, when debris left over from the birth of the planets was flying loose. See the rounded edges on these craters? It’s a sign they are old and time-worn. How would such a crater triplet form? There are different possibilities.

One possible explanation, ESA said – and thought to be the most likely explanation – is that the incoming debris (what we today might call an asteroid or a comet) broke into three pieces before hitting the ground, forming the crater trio upon impact. But, ESA added:

Not all ‘multiple impactors’ leave such clear and neat features in their wake, with many instead showing elongated troughs, non-circular hollows lying closely side-by-side, or only partially overlapping basins.

Another explanation could be coincidence: at different points in time, three separate impactors could have hit Mars’ surface in this location, creating a neat superposition of craters completely by chance.

Interestingly, if the impactor did indeed fragment and break apart, this may imply that the atmosphere of [Mars in its Noachian era, 3.7 to 4.1 billion years ago] was far denser – and harder to penetrate – than it is now.

This points towards an early Mars that was far warmer and wetter than the cold, arid world we see today. Observations from numerous missions are supporting this view and returning evidence that water once flowed across the red planet in large amounts, revealing features such as old river valley networks and large lake basins thought to have formed in the Noachian period.

Like many of the ancient and eroded craters in Mars’ southern highlands, these three craters have flattened rims, shallow floors, and have been filled with sediment in the 4 billion years since their formation. There is also evidence of ice here – the smallest crater has marks that are typically created as ice and debris creep across a surface, similar to how mixed rock-and-ice glaciers or debris-covered ice glaciers move in alpine regions of Earth.

ESA also said that – in the image above – you can see signs of other craters, as indicated by the round patches of sunken surface to the top right and bottom left. In fact, ESA said:

… Despite the cratered nature of Noachis Terra, the environment around this triplet is surprisingly smooth for such ancient terrain. Only a handful of small surrounding craters appear to have clear, sharply defined rims and bowls, indicating that they are relatively young and have not yet begun to erode in earnest. Overall, it seems that older craters in this area have ‘melted down’ into the surface – a phenomenon that is, again, due to ice.

As ice just under the surface of Mars flows and melts over many millions of years, the soil becomes softer. This soft, ice-rich soil subsides more quickly and fills up indentations and depressions more readily, contributing to the smooth appearance of this part of Noachis Terra. This suggests that there must have been a large amount of water present on Mars, at least during the Noachian period, capable of producing a glacier-like flow of abundant ice.

Understanding the history of Mars, and mapping the features covering the planet’s surface in detail, is a key objective of Mars Express. 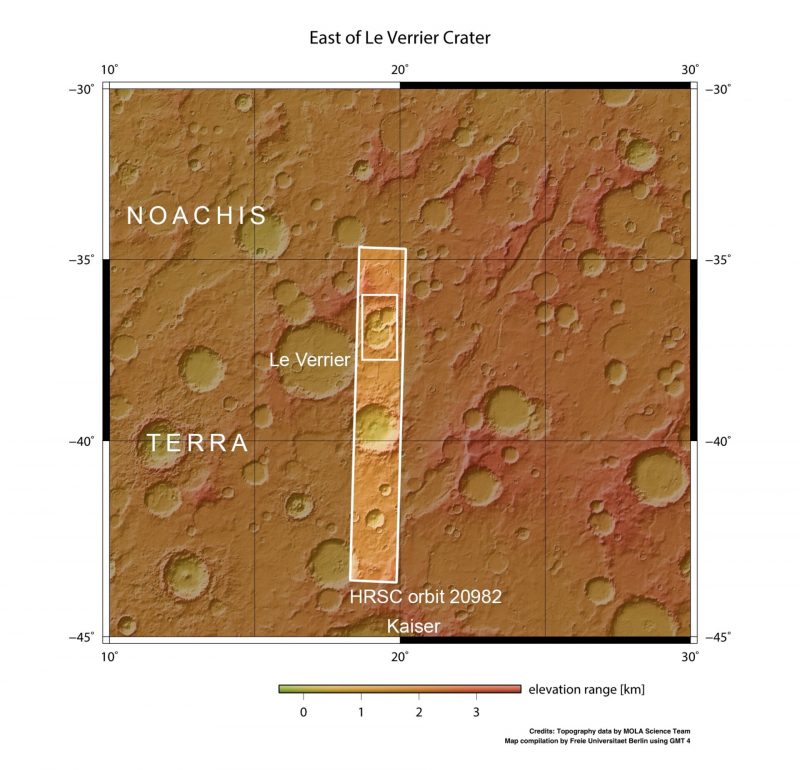 Triple crater in context in the ancient Martian highlands, specifically in the region of Noachis Terra. The area outlined by the bold white box indicates the area imaged by the Mars Express High Resolution Stereo Camera (HRSC) on August 6, 2020, during orbit 20982. Image via ESA.