The Mars Helicopter will launch with Mars 2020. It’ll be the first vehicle in history to attempt to establish the viability of heavier-than-air vehicular flight on another planet. Plus … space engineers celebrate with a selfie after attaching the Mars 2020 rover’s remote sensing mast.

With its thin atmosphere and low gravity, Mars offers unique challenges for those who want to fly an aircraft there. But – as part of its Mars 2020 mission – NASA has developed a technology demonstration for a heavier-than-air vehicle on the red planet. NASA said on June 6, 2019, that its Mars Helicopter flight demonstration project has now successfully passed a number of key tests. It said:

The small, autonomous helicopter will be the first vehicle in history to attempt to establish the viability of heavier-than-air vehicles flying on another planet.

That first test flight above the surface of Mars is scheduled for 2021. MiMi Aung, project manager for the Mars Helicopter at NASA’s Jet Propulsion Laboratory in Pasadena, California, said:

Nobody’s built a Mars Helicopter before, so we are continuously entering new territory. Our flight model – the actual vehicle that will travel to Mars – has recently passed several important tests. 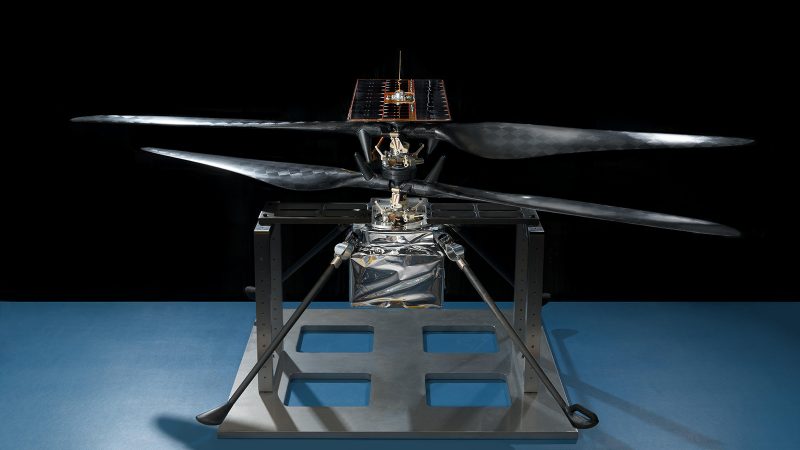 View larger. | This image of the flight model of NASA’s Mars Helicopter was taken on Feb. 14, 2019, in a cleanroom at NASA’s Jet Propulsion Laboratory in Pasadena, California. The aluminum base plate, side posts, and crossbeam around the helicopter protect the helicopter’s landing legs and the attachment points that will hold it to the belly of the Mars 2020 rover. Image via NASA/JPL-Caltech.

Back in January 2019 the team operated the flight model in a simulated Martian environment. Then the helicopter was moved to Lockheed Martin Space in Denver for compatibility testing with the Mars Helicopter Delivery System, which will hold the 4-pound (1.8-kilogram) spacecraft against the belly of the Mars 2020 rover during launch and interplanetary cruise before deploying it onto the surface of Mars after landing.

As a technology demonstrator, the Mars Helicopter carries no science instruments. Its purpose is to confirm that powered flight in the tenuous Martian atmosphere (which has 1 percent the density of Earth’s) is possible and that it can be controlled from Earth over large interplanetary distances. But the helicopter also carries a camera capable of providing high-resolution color images to further demonstrate the vehicle’s potential for documenting the red planet.

Future Mars missions could enlist second-generation helicopters to add an aerial dimension to their explorations. They could investigate previously unvisited or difficult-to-reach destinations such as cliffs, caves and deep craters, act as scouts for human crews or carry small payloads from one location to another. But before any of that happens, a test vehicle has to prove it is possible.

We expect to complete our final tests and refinements and deliver the helicopter to the High Bay 1 clean room for integration with the rover sometime this summer, but we will never really be done with testing the helicopter until we fly at Mars.

In other news about Mars 2020, NASA said on June 14, 2019, that its engineers have now successfully attached the remote sensing mast to the Mars 2020 rover. The engineers were excited and happy about it, as you can see from the image below. 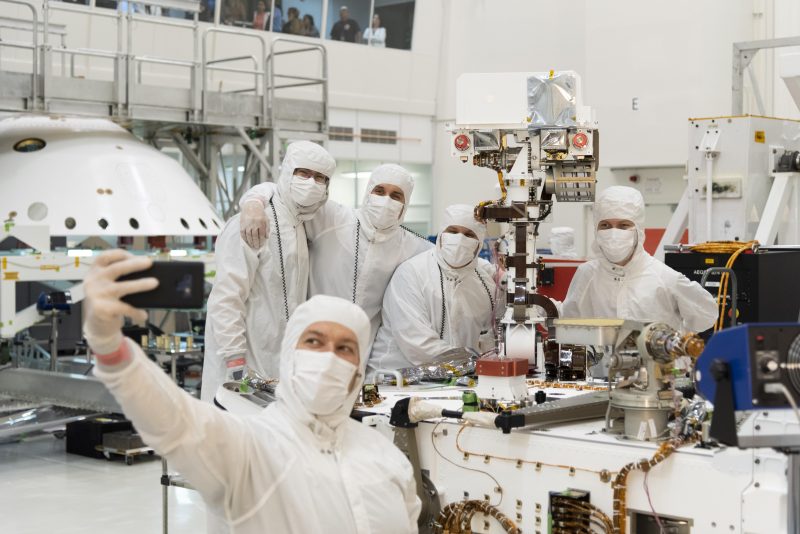 View larger. | Engineers working on NASA’s Mars 2020 project take a moment after attaching the remote sensing mast to the Mars 2020 rover. This image was taken on June 5, 2019, in the Spacecraft Assembly Facility’s High Bay 1 clean room at NASA’s Jet Propulsion Laboratory in Pasadena, California. Read more about this image.

The Mars 2020 rover – with the Mars Helicopter test – will launch on a United Launch Alliance Atlas V rocket in July 2020 from Space Launch Complex 41 at Cape Canaveral Air Force Station, Florida. When the mission lands in Mars’ Jezero Crater on February 18, 2021, the 2020 rover will conduct geological assessments of its landing site on Mars, determine the habitability of the environment, search for signs of ancient Martian life and assess natural resources and hazards for future human explorers. The Mars Helicopter will be a step foward in heavier-than-air travel above the surface of Mars. Click here more information about Mars 2020.

If you want to send your name to Mars with NASA’s 2020 mission, it’s not too late to do so. You have until September 30, 2019, to add your name to the list and obtain a souvenir boarding pass to Mars.