These boxy satellites, small enough to fit in a backpack, are currently trailing thousands of miles behind the InSight spacecraft on their way to Mars. 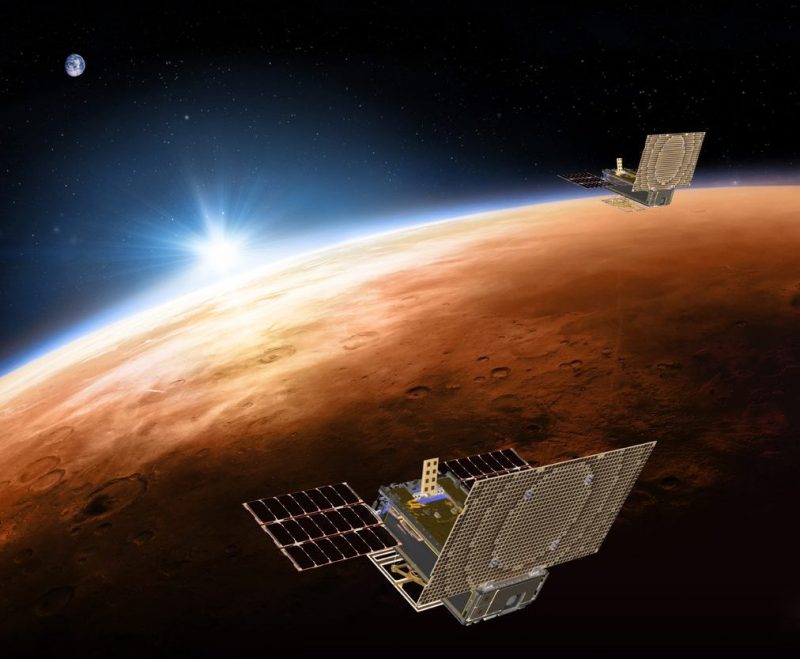 An artist’s rendering of the twin Mars Cube One (MarCO) spacecraft flying over Mars with Earth in the distance. Image via NASA/JPL.

Twenty years ago, CubeSats – a class of boxy satellites small enough to fit in a backpack – were used by universities as a teaching aid. Simpler, smaller and cheaper than traditional satellites, they’ve made space more accessible to private companies and science agencies.

This summer, NASA has been flying the first two next-generation CubeSats to deep space. They’re currently on their way to Mars, trailing thousands of miles behind the InSight spacecraft. InSight and its CubeSat tag-alongs are already more than halfway to the Red Planet.

The mini-mission, called Mars Cube One (MarCO), has already proved this class of spacecraft can survive the deep-space environment. It will next test the use of miniaturized communication technology to relay data when InSight attempts to land in November. Relaying landing data is one of the jobs of NASA’s orbiters, which will record InSight’s descent; engineers learn more from every landing attempt. MarCO will test whether this technology can ably perform the relay job for future missions. 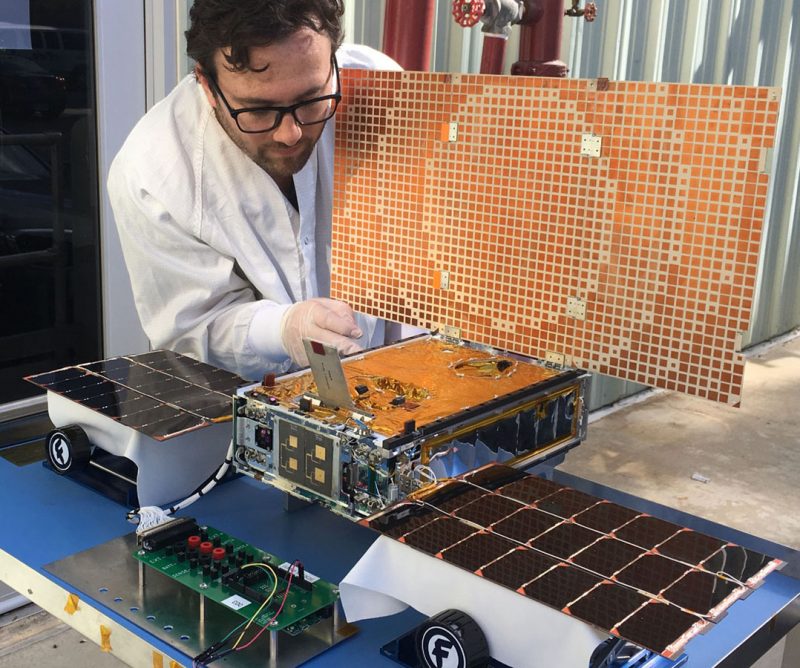 Engineer Joel Steinkraus uses sunlight to test the solar arrays on one of the Mars Cube One (MarCO) spacecraft. Image via NASA/JPL-Caltech.

To complete their mission, the MarCOs have miniature high-gain antennas and radios that can communicate with Earth from roughly 93 million miles (150 million km) away. Their propulsion systems are capable of steering towards Mars; each MarCO completed its second steering maneuver in August. They even have color cameras, one of which snapped the first image from a CubeSat of the Earth and the moon – proof of just how far this technology has literally come.

MarCO is still experimental. It’s meant to demonstrate that spacecraft technology can be shrunk into a tiny package and still do something useful in deep space. And while CubeSats will never compete with the larger and more complex spacecraft NASA usually flies, the MarCO spacecraft are pioneering a new class of robotic exploration.

Our hope is that MarCO could help democratize deep space. The technology is cheap enough that you could envision countries entering space that weren’t players in the past. Even universities could do this. 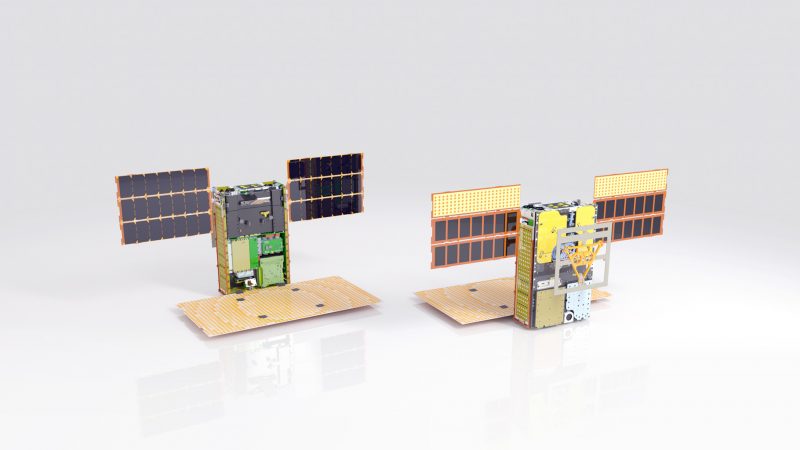 llustration of one of the twin MarCO spacecraft with some key components labeled. Front cover is left out to show some internal components. Antennas and solar arrays are in deployed configuration. Image via NASA/JPL-Caltech.

A Legacy of Pathfinders

JPL initiated and built MarCO, just one of several CubeSat projects the Lab has developed. JPL is a natural place to host CubeSats: The Lab built the first U.S. satellite, Explorer 1, which discovered the Van Allen radiation belts in 1958. Not unlike a CubeSat, it was a small, rudimentary spacecraft. The history of the U.S. space program followed in its wake.

JPL later built a Mars mini-rover called Sojourner that took baby steps in 1997 and proved to be a trial run for NASA’s Spirit, Opportunity and Curiosity rovers.

When it comes to innovation, MarCO is in the same class as Explorer 1 and Sojourner. The question is: Can we use CubeSats to do more science? Not all science, because they’re too limited to carry many instruments. But this technology creates a vehicle for people to do science at a much lower investment to the taxpayer.

NASA has already committed to answering the question. Thomas Zurbuchen, associate administrator of the agency’s Science Mission Directorate, is a proponent of CubeSats; last month, he announced NASA will be funding $100 million worth of SmallSat science missions each year. 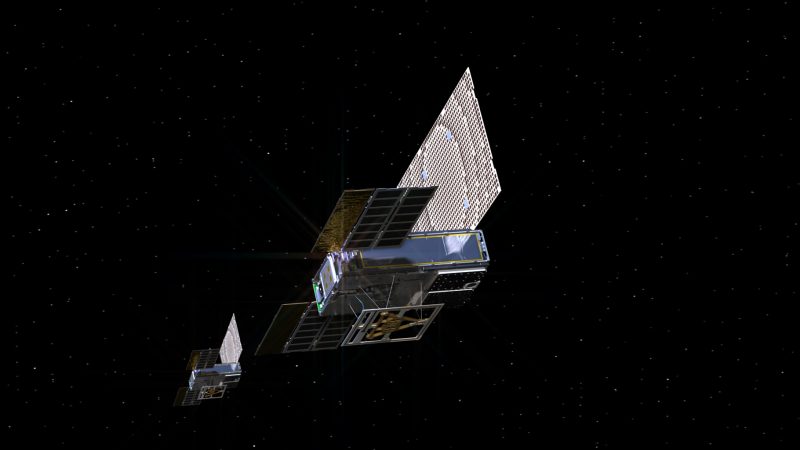 An artist’s rendering of the twin Mars Cube One (MarCO) spacecraft as they fly through deep space. Image via NASA/JPL-Caltech.

MarCO has already laid the groundwork for future exploration with small spacecraft. John Baker is the program manager responsible for small spacecraft at JPL. Baker said:

Almost all the features of MarCO are being adapted for use on future spacecraft. And many parts started with a commercial partner’s product that was modified.

The role of MarCO’s commercial partners can’t be overstated. Its solar panels, cameras, avionics, propulsion systems and attitude-control systems were all provided by commercial contractors. One advantage of CubeSats is they can use standardized parts and systems, allowing private companies to lower the price of new technology. Lower-cost spacecraft also mean engineers can take more design risks, testing that technology in space.

Van Zyl said that MarCO’s main goal was to prove CubeSats can survive the harsh journey to deep space. MarCO’s team can check that box off their list.

They’re already focused on their next goal: Mars is just a few months and 68 million miles (110 million km) away.

Bottom line: The MarCo spacecraft, tiny cubed satellites, are on their way to Mars.