Space debris lights up the sky over Pacific Northwest

A SpaceX rocket launched on March 4 that failed to perform a deorbit burn reentered Earth’s atmosphere on March 25, 2021. It created a startling light display over Seattle and Portland. 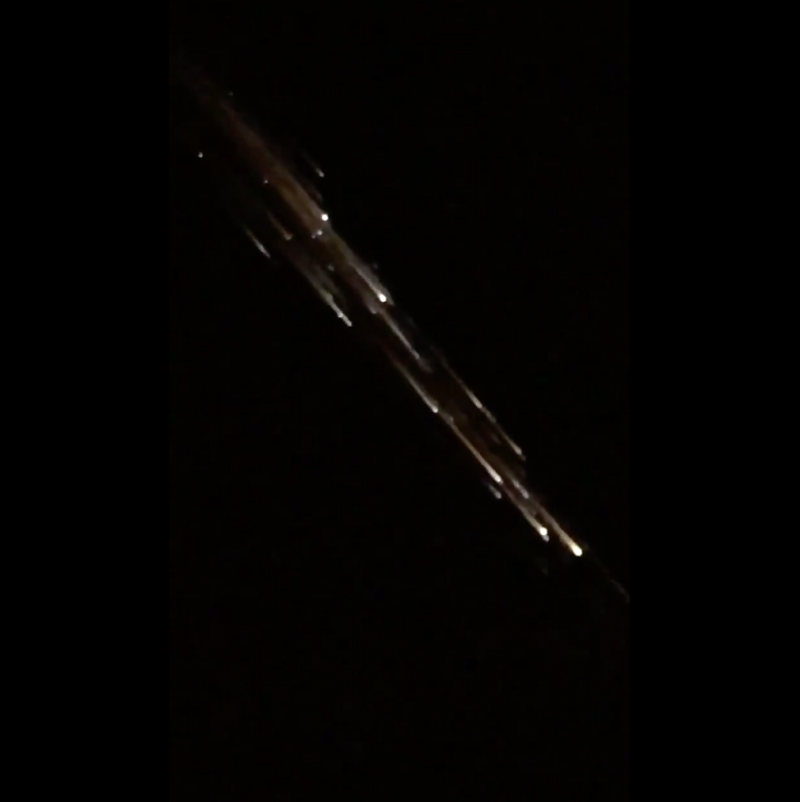 Video still from a tweet by Genevieve Reaume (@GenevieveReaume).

The American Meteor Society said it received “a lot of reports” of a bright fiery object traveling over Oregon and Washington on March 25, 2021, just after 9 p.m. Pacific Daylight Time. It was the reentry of a Falcon 9 second stage from a recent SpaceX’s Starlink mission launched March 4, 2021, and it lit up skies, surprising residents, who could see the debris disintegrating while reentering Earth’s atmosphere.

Videos and photos of the event below:

Another great video of the Falcon 9 rocket second stage streaking across the Pacific Northwest skies tonight after failing to make a deorbit burn.

DID YOU SEE THIS? I have never in my life seen something so incredible. I am in awe. Just happened over Portland about 10 minutes ago. #LiveOnK2 pic.twitter.com/L9wLEXBrcW

Meteor? I don’t know what that was, but it was spectacular. @KATUNews @CNN @MSNBC @fox12weather @NBCNews pic.twitter.com/xNj5FsaSFt

VIDEO: People across the South Coast, through Washington State & Oregon, were astounded by a massive moving lightshow in the sky. At least one astronomer says it's the second stage of a Falcon 9 rocket breaking up. Video from Aaron Mackee on the North Shore. @CBCAlerts @cbcnewsbc pic.twitter.com/dT1noSnATk

As you can see from the videos, the lights moved slowly across the sky, much more so than meteors that come barreling in toward Earth at up to 160,000 miles (257,500 km) per hour. That’s not to say that the debris was actually slow. In fact, it was sailing by overhead at 17,000 miles (27,300 km) per hour, well above the region of our atmosphere where aircraft fly, which is fortunate for any aircraft in the area.

This “slow” movement helped people have time to train their cameras on the event and resulted in a profusion of tweets questioning whether a meteor was breaking up.

But the debris that caused this incredible light show was not of natural origin. The March 25 event resulted from a rocket burning up after reentry. Jonathan McDowell, an astrophysicist at the Harvard-Smithsonian Center for Astrophysics, tweeted that it was from a March 4 rocket launch from Kennedy Space Center. The Falcon 9 second stage used in that launch failed to make its deorbit burn and has been circling Earth for almost a month before finally returning into our atmosphere last night over the Pacific Northwest.

The Falcon 9 second stage from the Mar 4 Starlink launch failed to make a deorbit burn and is now reentering after 22 days in orbit. Its reentry was observed from the Seattle area at about 0400 UTC Mar 26. pic.twitter.com/FQrBrUoBHh

McDowell explained that while scientists could predict that the reentry would happen on March 25, there was a 5-hour window of uncertainty as to when exactly it would reenter. This uncertainty made it impossible to predict where the debris would reenter.

4) But remember it's going 17000 mph, so a 5 hour time uncertainty means an 85,000 mile (53000 km) location uncertainty. That's more that one entire loop around the Earth. That's why we couldn't tell in advance that it would be the Seattle area that would see the reentry.

McDowell also said the second-stage rocket weighs about three tons and measures 23 feet (7 meters) by 12 feet (3.6 meters) across. It wasn’t even close to the first time this has happened this year.

Another fun debris fact: this is the 14th piece of space junk with a mass over one tonne that has reentered since Jan 1st this year.

It was the second time such debris has been from a SpaceX launch.

Bottom line: On March 25, 2021, debris from a SpaceX rocket launch earlier in the month reentered above the Pacific Northwest, creating an incredible light show for viewers on the ground.