The magnetic fields of a jellyfish galaxy

New work reveals the intricate relationship between so-called jellyfish galaxies, and the magnetic environment through which they move. 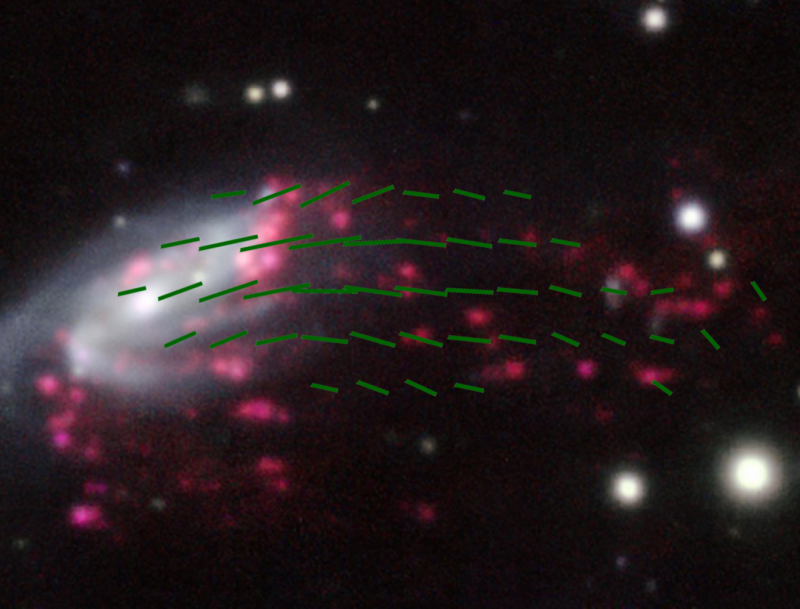 View larger. | The galaxy JO206 and its ordered magnetic field (green lines) along its gas tail. The pink objects characterize H-alpha emission, a type of emission that suggests the formation of new stars. Image via ESO/ GASP collaboration/ AIP.

The German-Italian team that conducted the study had their results published in the peer-reviewed journal Nature Astronomy. Lead author was Ancla Müller from the Ruhr University Bochum. Müller explained:

As the galaxy falls on the center of the galaxy cluster, an interaction takes place with the medium between the individual galaxies and its magnetic field. 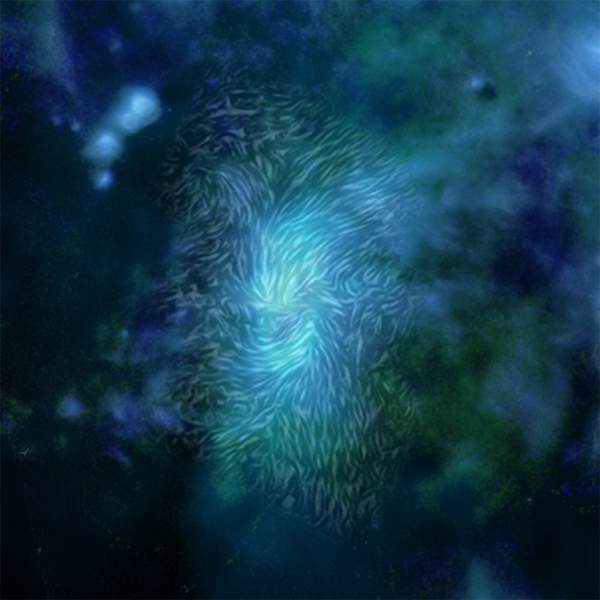 The magnetic fields of galaxies are an area of active research. Here’s an image from SOFIA showing celestial dust grains, which are aligned perpendicular to magnetic field lines at the center of our own galaxy, the Milky Way. Read more about this photo. Image via NASA/ SOFIA/ L. Proudfit; ESA/ Herschel; Hubble Space Telescope.

In order to explain this interaction, the team used computer simulations together with their polarization data observed with the VLA, to develop a theory. Their scenario involves the jellyfish galaxy JO206 rushing at high speed to the center of the galaxy cluster, causing its own magnetic fields to interact with those in the cluster. Meanwhile, hot winds from the space between the galaxies is collecting, they said, as accumulations of plasma (not solid, not liquid, not gas, but a fourth state of matter) on the outside of the newly formed tail of the jellyfish galaxy. Co-author Christoph Pfrommer of the Leibniz Institute for Astrophysics in Potsdam explained that the magnetic layer surrounding the tail protects it from falling apart:

As the jellyfish galaxy flies through the galaxy cluster, its magnetic field wraps around the galaxy like a mantle and is further strengthened and smoothed by the high speed of the galaxy and by cooling effects.

This would provide enough material for star formation. It should be fascinating to see whether this picture can be confirmed by further measurements on other objects.

Astronomer Bianca Poggianti of the Italian National Institute for Astrophysics – whose earlier study had shown that stars can form in the gas tails of jellyfish galaxies, and who is a co-author on the current paper – concluded:

To verify the hypotheses suggested by the observations of the jellyfish galaxy JO206 we are observing other galaxies with similar tails using radio telescopes in Australia, South Africa and the United States. 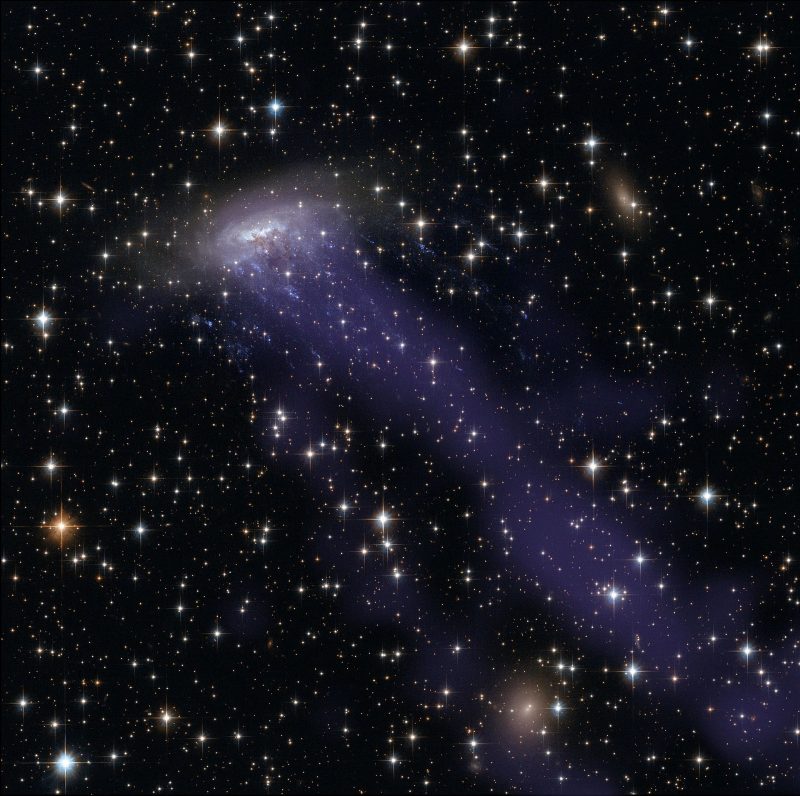 Here’s another jellyfish galaxy. This one is called ESO 137-001. This image was obtained using Hubble Space Telescope observations, combined with data from the Chandra X-ray Observatory. Image via NASA Goddard Spaceflight Center.

Bottom line: A team in Europe announced the results of their careful analysis of the magnetic field structure of the tail of a jellyfish galaxy known as JO206. They found the magnetic field aligned very precisely along the galaxy’s “tentacles,” or tail, where active star formation is taking place.