Last week, the space technology startup Lunar Outpost publicly displayed its rover concept – the Lunar Resource Prospector – for the 1st time. The rovers may help pave the way for a human return to the moon. 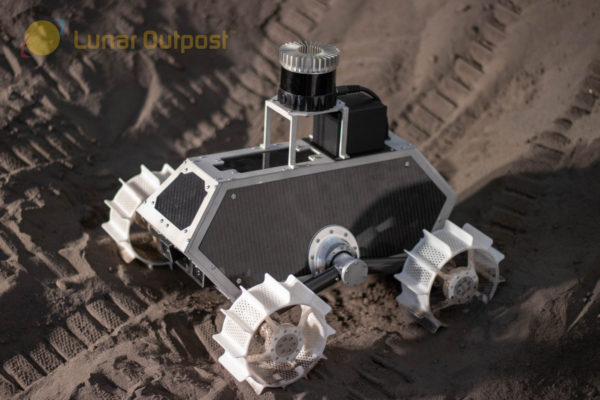 A test model of the Lunar Resource Prospector rover. Image via Lunar Outpost.

The goal of returning human explorers to the moon seems like a long way off, but there is progress being made, including in the private sector. This past week, the Colorado-based aerospace company Lunar Outpost publicly demonstrated its new lunar rover concept for the first time. The rover – called the Lunar Resource Prospector – was shown driving and drilling in simulated lunar regolith at a new lunar testbed facility, overseen by the Colorado School of Mines’ Center for Space Resources, on November 13, 2018.

The Lunar Resource Prospector rovers are small, only weighing only about 22 pounds (10 kilograms). That’s in contrast to the Curiosity rover, a car-sized rover currently exploring Gale Crater on Mars, which has a mass of 1,982 pounds (899 kg). Yet swarms of little moon rovers like these play a key role in the dream of establishing a permanent human presence on the moon.

For example, these little rovers are designed to provide exploration data for what is called In-Situ Resource Utilization (ISRU). That is, they’re designed to go to the moon ahead of future crewed missions, so that the human missions can be more effectively and efficiently organized. The rovers will be “scouting” for resources, needed since future crewed missions won’t be able to bring all of the supplies that they need with them. Instead, they’ll need to make use of resources on the moon itself, such as water, precious metals and Helium-3, which is rare on Earth.

Other flyby/orbiting robotic missions to the moon have learned that those resources are there, on the moon’s surface. The data from earlier missions has been used to create general resource models of the moon’s surface. Now, Lunar Outpost said, the models require ground-truthing to establish the optimal landing sites and plan future resource extraction operations. 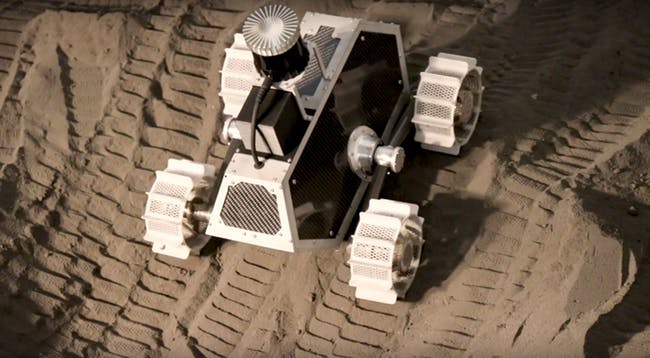 Another view of a test model of a Lunar Resource Prospector rover. Image via Lunar Outpost.

As envisioned, the Lunar Resource Prospectors will autonomously explore the moon’s surface in groups, mapping both surface and subsurface resources. They’ll navigate along planned waypoints, while avoiding obstacles and hazards such as rocks and craters. While primarily autonomous, they can also be operated remotely if needed by human astronauts.

If NASA’s planned Lunar Orbital Platform-Gateway goes ahead and is built, the rovers could also use it as a central hub of operations.

All of this is to help prepare for permanent human settlements on the moon. As AJ Gemer, chief technology officer of Lunar Outpost, told Inverse:

We want to see as many people living and working on the moon as possible in our lifetimes.

These rovers differ significantly from previous rover missions, on both the moon and Mars. On the moon, astronauts would use just one rover at each of their landing sites, and Mars rover missions have consisted of one to two highly advanced robots at most for a given mission – such as the twin Mars Exploration Rovers Spirit and Opportunity. The rover Curiosity is a single, even larger and more advanced rover.

But the Lunar Prospectors would operate in “swarms” of multiple rovers – called Autonomous Lunar Prospecting Swarms (ALPS). Not only could ALPS map much larger areas, they also don’t need to take breaks the way that their human operators would. 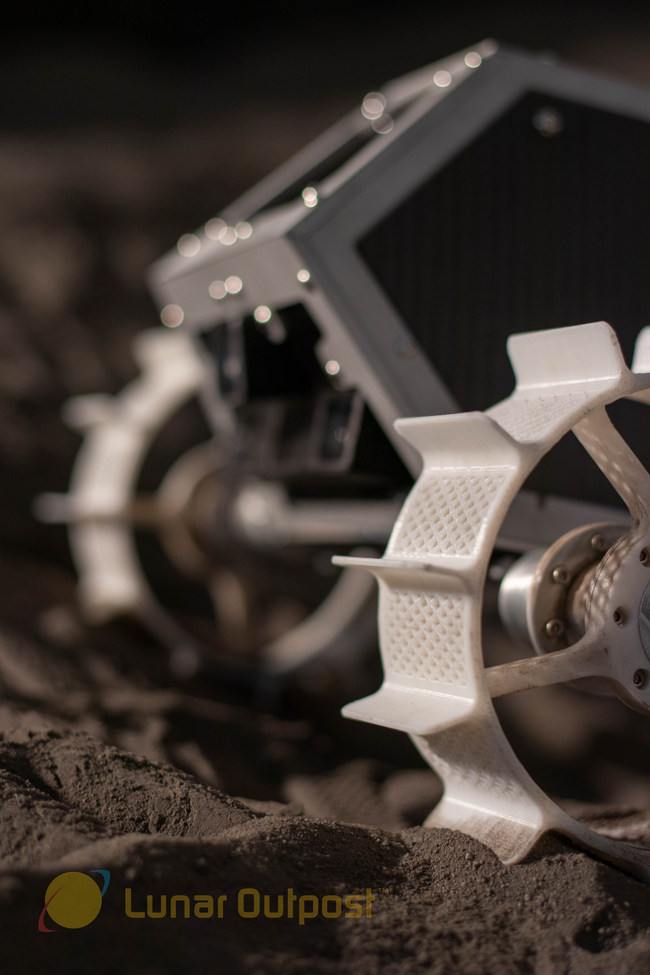 Closer view of a front wheel on the test model. Image via Lunar Outpost.

So what are these rovers actually like, design and instrument-wise?

I mentioned they are small (22 pounds, or 10 kg) each. Even so, half of that is available for extra payloads other than navigation and prospecting, and the rovers will be able to drill into the lunar surface and analyze those samples from depths greater than remote sensing missions in orbit can measure.

The rovers also have a forward-facing mass spectrometer to scan the surface for resources so that they can travel to the regions of highest concentration, similar to “following the vein” of ore in terrestrial mining. A space-rated 360 Laser Imaging, Detection, and Ranging (LIDAR) system will be used to create maps of surface features with unprecedented centimeter-scale resolution. That system will also allow ALPS to see in the dark – even in deep, permanently shadowed crater or lava tubes. Lunar prospecting will become a real thing thanks to the Lunar Resource Prospectors!

The rovers will even be equipped with 4K video capability, showing the lunar surface with better clarity than ever before. 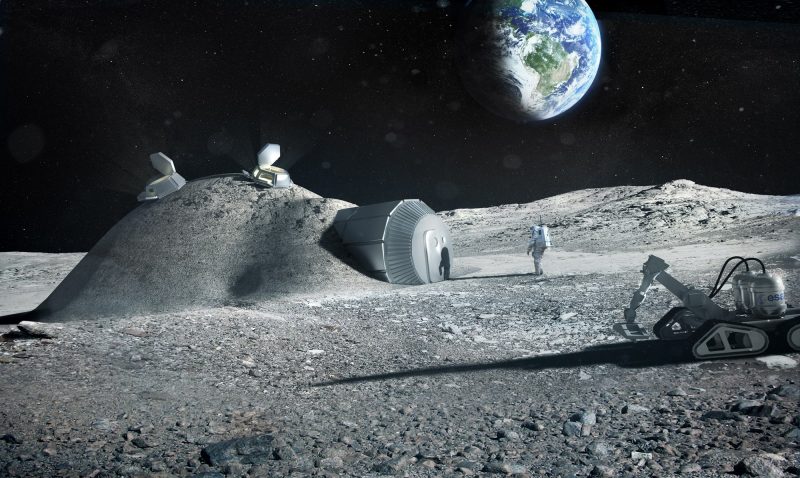 Both NASA and ESA have plans for future bases on the moon similar to this artist’s concept. Companies like Lunar Outpost can help make it happen. Image via ESA/Foster + Partners.

The Lunar Resource Prospector rovers are also economical – they can be mass-produced and customized for various mission tasks, which is vital in the space industry, where missions can be prohibitively expensive.

Lunar Outpost is expected to announce details about the first mission in mid-2019.

Also, the Lunar Resource Prospector rover mission should not be confused with NASA’s Lunar Prospector orbital mission, which was launched on January 6, 1998. That mission was a single orbiter and has no connection to Lunar Outpost.

Bottom line: Although it may still be a few years off, private companies – along with NASA and other space agencies – are getting closer to returning to the moon, with plans of eventually going there to stay permanently with human settlements. Using the latest technologies, rovers such as Lunar Resource Prospector and other missions will help bring that dream a big step closer to reality.