Lunar Flashlight to seek ice on the moon

Future astronauts on the moon will need to have water, and now NASA has designed a new CubeSat spacecraft to search for ice in lunar craters using laser beams. 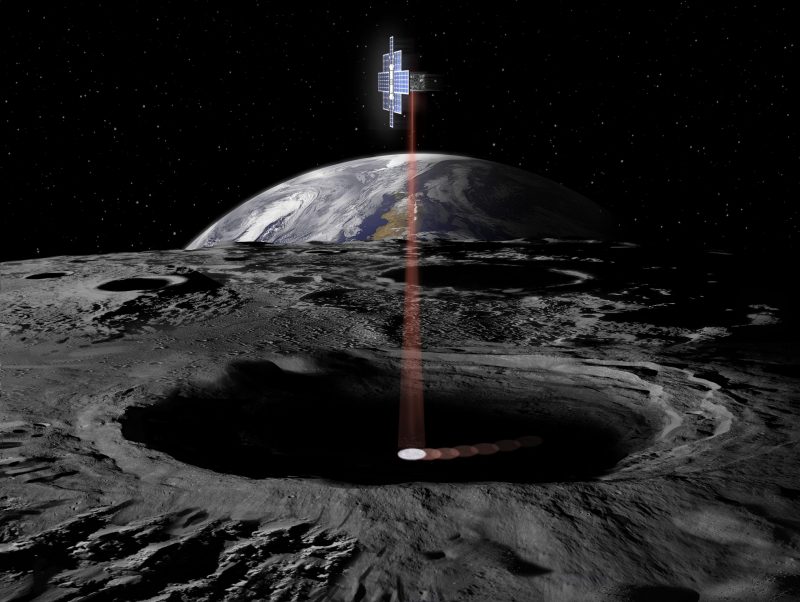 Artist’s concept of the Lunar Flashlight searching for ice deposits in deep, shadowed craters near the south pole of the moon. Image via NASA/ JPL-Caltech.

NASA is moving forward with its Artemis program, whose goal is to land the first woman and next man at the moon’s south pole by 2024. See this April 2020 report. When humans return to the moon this time, they’ll likely stay longer than their Apollo counterparts in the late 1960s and ’70s; the record stay during the Apollo missions was about 75 hours.

To accomplish future longer stays on the moon, lunar astronauts might utilize some natural resources from the moon itself, in particular water ice said to have been confirmed to exist in 2018, in deeply shadowed craters at the moon’s poles. This ice can be melted and purified for drinking; it can be used for rocket fuel. Enter Lunar Flashlight – a briefcase-sized satellite, also known as a CubeSat – with a projected launch date of 2021 and a specific mission of detecting naturally occurring surface ice in shadowed craters on the moon.

NASA’s Jet Propulsion Laboratory (JPL) described the innovative Lunar Flashlight technology on April 27, 2020. A new peer-reviewed paper about it was published in the April 2020 issue of IEEE Aerospace and Electronic Systems Magazine.

What is the Lunar Flashlight and what will it do? 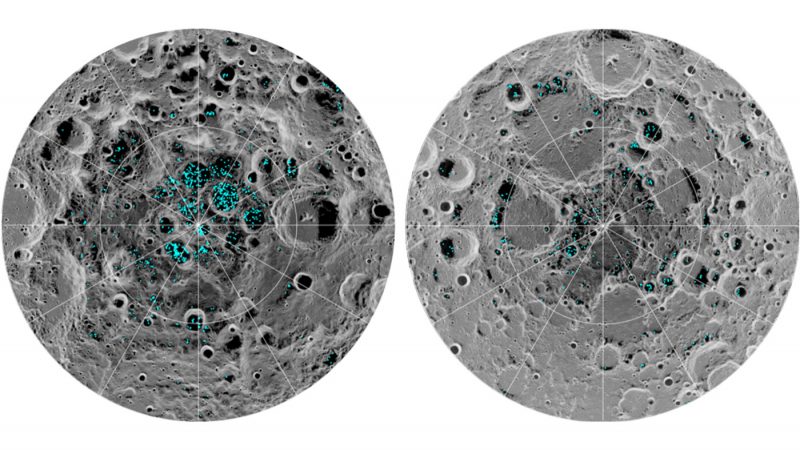 View larger. | Scientists directly observed definitive evidence of water ice on the moon’s surface in 2018. The image shows the distribution of surface ice at the moon’s south pole (left) and north pole (right), detected by NASA’s Moon Mineralogy Mapper instrument. Blue represents the ice locations, plotted over an image of the lunar surface, where the gray scale corresponds to surface temperature (darker representing colder areas and lighter shades indicating warmer zones). The ice is concentrated at the darkest and coldest locations, in the shadows of craters. Image via NASA.

Basically, Lunar Flashlight acts like a spotlight. Lunar Flashlight will scan the surface with a near-infrared laser beam, shining down on the lunar surface to help scientists look for deposits of ice near the lunar south pole. Barbara Cohen, principal investigator of the mission at NASA’s Goddard Space Flight Center, said in the JPL statement:

Although we have a pretty good idea there’s ice inside the coldest and darkest craters on the moon, previous measurements have been a little bit ambiguous.

Scientifically, that’s fine, but if we’re planning on sending astronauts there to dig up the ice and drink it, we have to be sure it exists.

Lunar Flashlight is a very small satellite [about 5 x 10 x 14 inches, or 12 × 24 × 36 cm], developed and managed by the Jet Propulsion Laboratory, that will search for water ice exposures and map their locations in the moon’s south polar region. The Lunar Flashlight mission will demonstrate technologies for NASA such as green propulsion and active laser spectroscopy while proving the capability of performing a planetary science investigation in the CubeSat form factor. Lunar Flashlight was selected in 2014 by the NASA Advanced Exploration Systems (AES) program … Lunar Flashlight will be one of 13 secondary payloads launched on Artemis-1, currently scheduled for 2020.

Water ice deposits have been found by orbiting spacecraft, but Lunar Flashlight would allow the exact locations of deposits to be determined, which could then be mined and used by astronauts staying on the moon for long periods of time. It will also be the first lunar mission to use lasers to find the ice. John Baker, Lunar Flashlight project manager at JPL, said:

A technology demonstration mission like Lunar Flashlight, which is lower cost and fills a specific gap in our knowledge, can help us better prepare for an extended NASA presence on the moon as well as test key technologies that may be used in future missions.

Because the moon is virtually airless, it gets very hot in the sunlight, but extremely cold in the darkness, especially within deep craters that are permanently in shadow at the poles. In those cold places, water ice molecules can accumulate and remain stable on the surface. As Cohen explained:

The sun moves around the crater horizon but never actually shines into the crater. Because these craters are so cold, these molecules never receive enough energy to escape, so they become trapped and accumulate over billions of years. 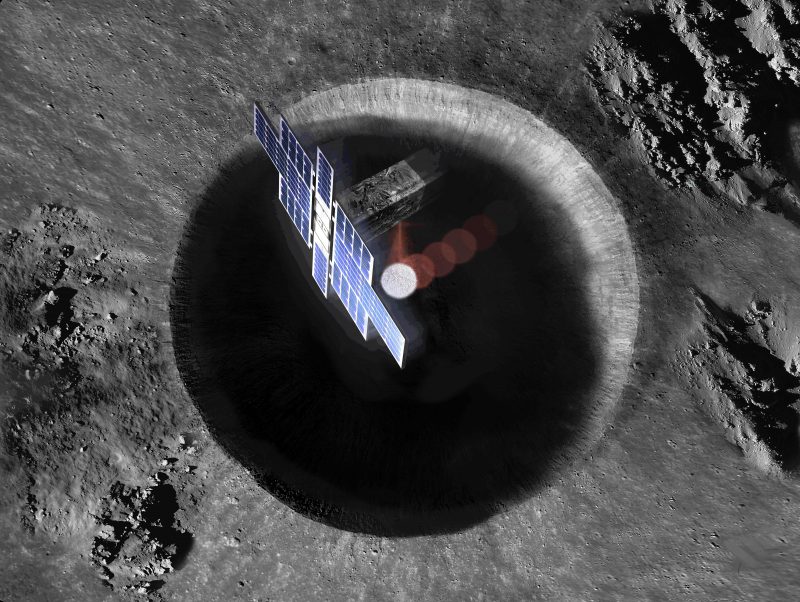 Artist’s concept of Lunar Flashlight seen from above. Image via NASA/ JPL-Caltech.

Such deposits on the moon are of much interest, and necessary, for future astronauts who will want to stay on the moon for long missions, or even eventually stay there permanently in bases. It would be expensive to continually transport water from Earth to the moon, so using the available resources of the already-existing ice deposits makes sense.

Lunar Flashlight will beam its lasers into some of these craters where the ice is either known or suspected to exist. It will do this for at least two months, and will be able to map out where these deposits are with great accuracy.

How does Lunar Flashlight identify ice?

The spacecraft’s four-laser reflectometer, which incorporates spectrophotometry, will use near-infrared wavelengths in the laser beams. Those wavelengths will be absorbed by water ice, but bare rock will simply reflect them back to the spacecraft. If there is a lot of absorption in a crater, that would be evidence for widespread ice deposits. Those findings can then be compared with those from other orbiters that have previously found ice on the moon. Cohen said:

We will also be able to compare the Lunar Flashlight data with the great data that we already have from other moon-orbiting missions to see if there are correlations in signatures of water ice, thereby giving us a global view of surface ice distribution.

Lunar Flashlight will also be the first planetary CubeSat mission to use “green” propulsion, propellant that is less toxic and safer than hydrazine, which is commonly used by most spacecraft. 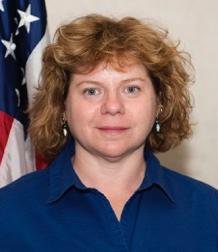 While ice on the moon may sound rather unusual, it isn’t really too surprising to scientists. Asteroids and of course comets can also contain water ice. Even Mercury, which is much closer to the sun than the moon, has ice near its poles, found by the MESSENGER spacecraft in 2012.

There are also two other missions on the Artemis-1 launch that will complement Lunar Flashlight; Lunar IceCube and LunaH-Map will make additional measurements, looking for ice and other hydrogen deposits at the lunar south pole and on the near side of the moon. Results from all three missions will be synergistic, simultaneously exploring the nature and distribution of water ice on the moon in advance of human exploration.

Missions like Lunar Flashlight will help NASA astronauts not only continue to explore the moon, but also set the stage for long-term and then permanent human settlement on our nearest neighbor in space.

Bottom line: NASA has designed a new CubeSat spacecraft, the Lunar Flashlight, to search for ice on the moon using laser beams.