NASA’s Mars Reconnaissance Orbiter has revealed Mars as a dynamic world of wind and shifting sands. Will we be able to resist going there?

Space scientists – who until now believed the sand dunes of northern Mars were frozen in time – now realize the martian sands are changing with both sudden and gradual motions. 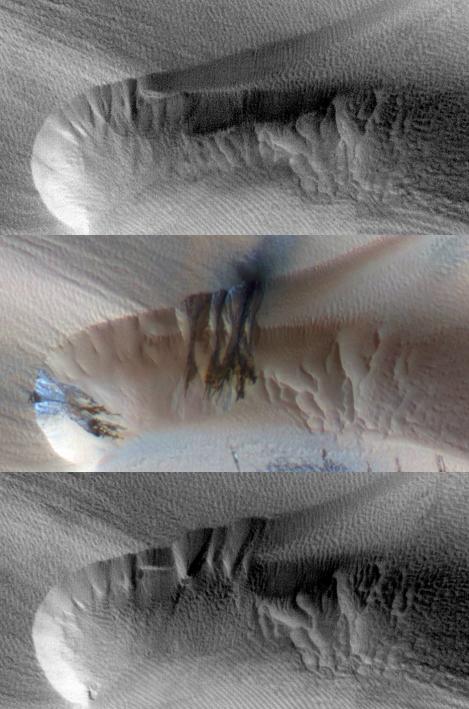 NASA’s Mars Reconnaissance Orbiter has been peering down at this part of Mars – an area the size of Texas – over a period covering two Martian years, or about four Earth years. The orbiter’s camera observed these dune fields in a band around the planet at the edge of Mars’ north polar cap.

Three images of the same location taken at different times on Mars show seasonal activity causing sand avalanches and ripple changes on a Martian dune. Time sequence of the images progresses from top to bottom. Each image covers an area 285 meters (312 yards) by 140 meters (153 yards). The crest of a dune curves across the upper and left portions of the image.

The High Resolution Imaging Science Experiment (HiRISE) camera on NASA’s Mars Reconnaissance Orbiter took these images. The site is at 84 degrees north latitude, 233 degrees east longitude, in a vast region of dunes at the edge of Mars’ north polar ice cap. The area is covered by carbon-dioxide ice in winter but is ice-free in summer. The top and bottom images show part of one dune about one Mars year apart, at a time of year when all the seasonal ice has disappeared: in late spring of one year (top) and early summer of the following year (bottom). The middle image is from the second year’s mid-spring, when the region was still covered by seasonal carbon-dioxide ice.

Spring evaporation of the seasonal layer of ice is manifested as dark streaks of fine particles carried to the top of the ice layer by escaping gas. The bottom of the ice layer, in contact with the dark ground, warms faster than the top of the ice does in the spring. Carbon-dioxide gas produced by the thawing of the bottom ice is temporarily trapped under the top ice. As the ice evaporates from the bottom, flow of gas under the ice destabilizes the sand on the dune and causes the sand to avalanche down the dune slipface. A before-and-after comparison of the dune shows new alcoves and extension of the debris apron on the slipface of the dune caused by descending grains of sand. New wind ripples appear on the debris apron.

So the sands of northern Mars – once believed to be frozen and still – have been seen by the HiRISE camera on NASA’s Mars Reconnaissance Orbiter to be in motion. Now, more than ever, we now see Mars as a dynamic world – pristine – and with eternally shifting sands. Will we be able to resist going there?