Astronomers spy most distant star yet

Astronomers call it Lensed Star 1 because gravitational microlensing magnified its light some 2,000 times. That’s how they saw it shining from the distant past, only 4.4 billion years after the Big Bang.

Astronomers said on April 2, 2018, that they used the Hubble Space Telescope to find the most distant star yet. This star is at least 100 times farther away than the next individual star ever seen, except for supernova explosions. Normally, when we talk about objects at this very great distance – in this case, seen at a time only 4.4 billion years after the Big Bang – we’re talking about supernova explosions, or other very, very bright objects or events in the universe, perhaps galaxies containing of billions of stars, or galaxy clusters, or energetic processes going on within galaxies. But this discovery is of a single star. It’s a hot blue star – called Lensed Star 1, or LS1, by astronomers – whose light was magnified some 2,000 times via a technique called gravitational microlensing. The scientists said in a statement that the discovery provides:

… new insight into the formation and evolution of stars in the early universe, the constituents of galaxy clusters and also on the nature of dark matter.

As so often happens in astronomy, the astronomers were looking at something else – a supernova explosion in the galaxy cluster MACS J1149.5-223 – when they found this very distant star in April 2016. They happened to spot the hot blue star – brightened due to magnification by the lensing technique – in the same galaxy that hosted the supernova. 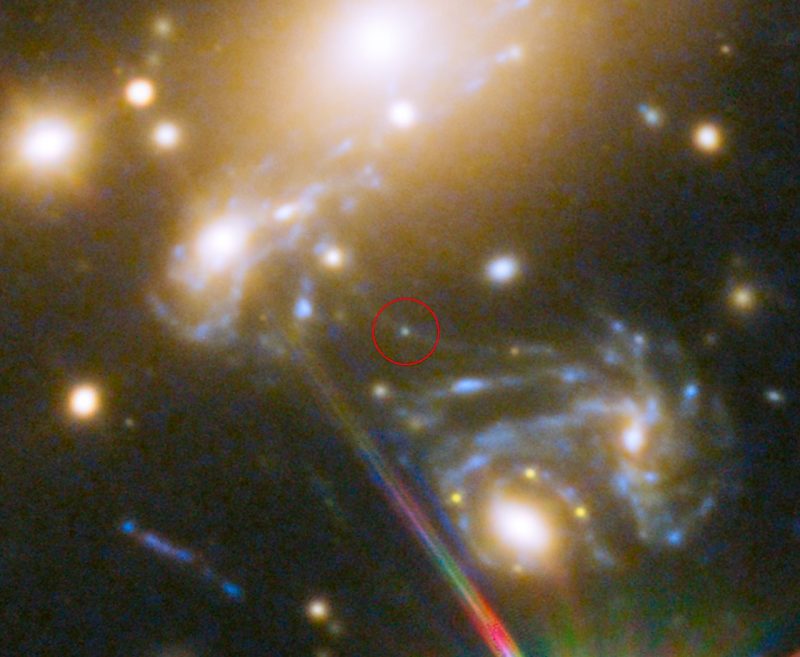 View larger. | This image shows the the distant galaxy cluster MACS J1149.5+223. After being magnified some 2,000 times via gravitational microlensing, the star LS1 appeared within a galaxy in this cluster. Image via Hubble Space Telescope.

The discovery of LS1 allows [astronomers] to gather new insights into the constituents of the galaxy cluster. They know that the microlensing was caused by either a star, a neutron star, or a stellar-mass black hole.

LS1 therefore allows astronomers to study neutron stars and black holes, which are otherwise invisible, and they can estimate how many of these dark objects exist within this galaxy cluster.

What’s more, the star is enabling astronomers to gain insights about dark matter, a mysterious unseen substance thought to constitute a substantial fraction of the total matter in our universe. Kelly said:

If dark matter is at least partially made up of comparatively low-mass black holes, as it was recently proposed, we should be able to see this in the light curve of LS1.

So far, these astronomers said, their observations don’t favor the possibility that a high fraction of dark matter is made of low-mass black holes. But they said they’re looking forward to using the gravitational microlensing technique to probe for more individual stars in the distant, and young, universe.