A potential human habitat on the moon?

A new study says a hole in the moon’s Marius Hills region is the skylight of an underground lava tube large enough to house a city. 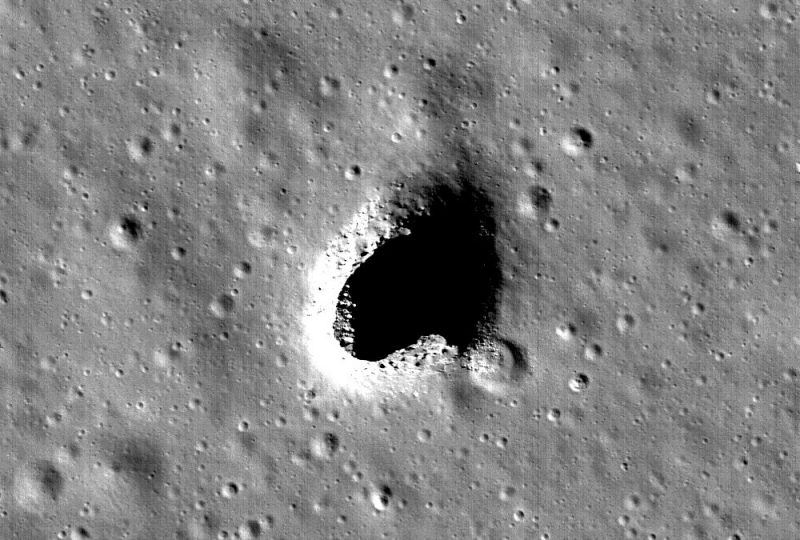 A study published in Geophysical Research Letters on October 17, 2017 says that a hole in the moon’s Marius Hills – a region with a set of volcanic domes – is a skylight of a large open lava tube that could be used to protect astronauts from hazardous conditions on the surface. It could be large enough, the researchers say, to house an underground lunar city.

No one has ever been on the moon longer than three days, largely because space suits alone can’t shield astronauts from its elements: extreme temperature variation, radiation, and meteorite impacts. Unlike Earth, the moon has no atmosphere or magnetic field to protects its inhabitants.

The safest place to seek shelter is the inside of an intact lava tube, according to the study.

Lava tubes are naturally-occurring channels that form when a lava flow develops a hard crust, which thickens and forms a roof above the still-flowing lava stream. Once the lava stops flowing, the tunnel sometimes drains, forming a hollow void. Lava tubes exist on Earth, but the ones on the moon are much larger.

The city of Philadelphia is shown inside a theoretical lunar lava tube. Image via Purdue University/David Blair.

The Marius Hills hole was first discovered by the Japanese SELenological and ENgineering Explorer (SELENE), and has been the subject of much research and speculation. The new study, the scientists say, confirms that the opening is a skylight of a large underground lava tube.

Junichi Haruyama is a senior researcher at JAXA, Japan’s space agency. Haruyama said in a statement:

It’s important to know where and how big lunar lava tubes are if we’re ever going to construct a lunar base.

For the study, the researchers analyzed data from the SELENE spacecraft, and consulted scientists from the GRAIL mission, a NASA effort to collect high-quality data on the moon’s gravitational field.

Read more about how the researchers did the study.

The researchers say that, if the gravity results are correct, the lava tube near the Marius Hills is spacious enough to house one of the largest U.S. cities.

Bottom line: A large open lava tube in the moon’s Marius Hills region could protect astronauts from hazardous conditions on the lunar surface. It might someday be a good spot for a city on the moon.