Imagine seeing 2 suns in your sky. Like the fictional planet Tatooine in Star Wars, some planets do orbit 2 stars. Kepler-164 is the largest yet discovered. 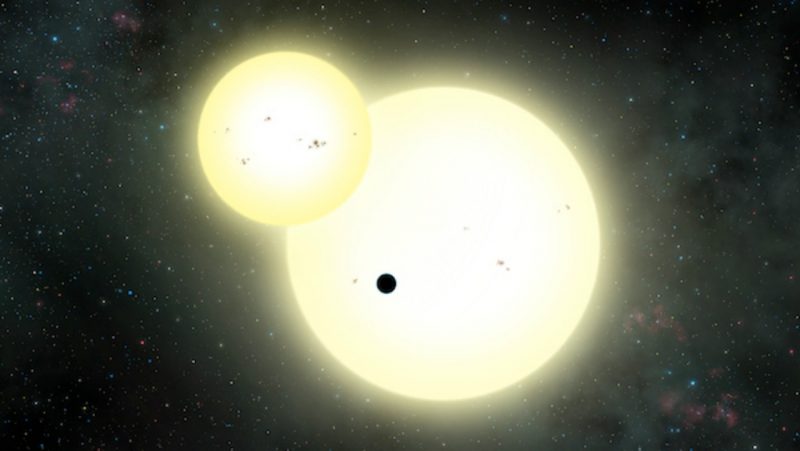 Artist’s impression of the simultaneous stellar eclipse and planetary transit events in the double star system Kepler-1647. Image by Lynette Cook via SDSU.

Remember the double suns in the sky of Luke Skywalker’s home planet Tatooine, in the first Star Wars movie? Astronomers have found only a few such planets so far – that is, circumbinary planets – planets orbiting double stars. On June 13, 2016, astronomers from NASA’s Goddard Space Flight Center and San Diego State University (SDSU) said that an exoplanet known as Kepler-1647 b is the largest circumbinary planet – sometimes called Tatooine planet – both in size and orbit, of any discovered so far.

The astronomers used the Kepler Space Telescope to identify the new planet. This space telescope lets astronomers look for slight dips in brightness that hint a planet might be transiting in front of a star, blocking some of the star’s light. SDSU astronomer William Welsh, one of the paper’s coauthors, commented in a statement:

… finding circumbinary planets is much harder than finding planets around single stars. The transits are not regularly spaced in time and they can vary in duration and even depth.

Still, find the planet they did. The astronomers estimate that Kepler-1647 b is 3,700 light-years away and approximately 4.4 billion years old, roughly the same age as our Earth. The stars it orbits are similar to our sun, with one slightly larger than our home star and the other slightly smaller.

The planet isn’t like Earth, though. It’s what we call a gas giant, with a mass and radius nearly identical to that of Jupiter, the largest planet in our solar system. According to these astronomers, it’s the largest transiting circumbinary planet ever found.

The planet takes 1,107 days (just over 3 years) to orbit its host stars. That’s in contrast to Earth’s year of 365 years and it’s the longest period of any confirmed transiting exoplanet found so far. Most circumbinary planets have orbits relatively near their stars. This planet is much farther away from its stars.

In fact, the planet is within what’s called the habitable zone by astronomers, the region of a planetary system where water might exist in liquid form and thus life as we know it might exist. These astronomers note:

Like Jupiter, however, Kepler-1647 b is a gas giant, making the planet unlikely to host life. Yet if the planet has large moons, they could potentially be suitable for life.

Though these stars are too faint to see with the eye, the Kepler-1647 system is located in the direction of our constellation Cygnus the Swan, overhead on summer evenings.

Classic shot from the first Star Wars movie, when we knew we weren’t in Kansas anymore. Image via Wikimedia Commons.

Bottom line: Astronomers from NASA’s Goddard Space Flight Center and San Diego State University recently announced a new, large circumbinary planet – or Tatooine planet – that is, a planet orbiting two suns. They say Kepler-1647 b is the largest in both in size and orbit, of any discovered circumbinary planet discovered so far.