We currently have nearly 4,000 confirmed exoplanets, or planets orbiting distant suns. Kepler discovered more than 2,600 of them. But now Kepler is passing the torch. 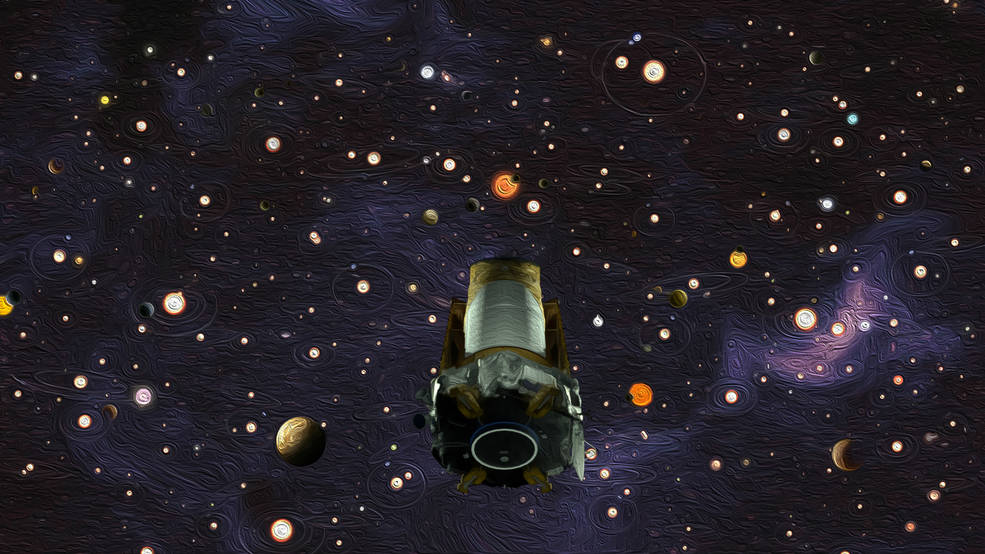 Astronomers only began discovering exoplanets – planets orbiting stars in other solar systems – in the 1990s, after a decades-long search. In this century, the number of known exoplanets has exploded in size, mainly due to this spacecraft, NASA’s Kepler space telescope, which was specifically designed as a planet-hunter. Kepler launched into an Earth-trailing heliocentric (sun-centered) orbit in 2009. Its mission lasted longer than expected, but now – after nine years in deep space – Kepler has run out of fuel needed for further science operations. NASA said this week (October 30, 2018), it has decided to retire the spacecraft within its current, safe orbit, away from Earth.

Kepler leaves a legacy of more than 2,600 planet discoveries outside our solar system. It is now passing the planet-hunting torch to the Transiting Exoplanet Survey Satellite (TESS), launched last April. TESS builds on Kepler’s foundation with fresh batches of data in its search of planets orbiting some 200,000 of the brightest and nearest stars to the Earth, worlds that can later be explored for signs of life by missions such as NASA’s James Webb Space Telescope.

A statement from NASA said:

Kepler has opened our eyes to the diversity of planets that exist in our galaxy. The most recent analysis of Kepler’s discoveries concludes that 20 to 50 percent of the stars visible in the night sky are likely to have small, possibly rocky, planets similar in size to Earth, and located within the habitable zone of their parent stars. That means they’re located at distances from their parent stars where liquid water – a vital ingredient to life as we know it – might pool on the planet surface.

The most common size of planet Kepler found doesn’t exist in our solar system – a world between the size of Earth and Neptune – and we have much to learn about these planets. Kepler also found nature often produces jam-packed planetary systems, in some cases with so many planets orbiting close to their parent stars that our own inner solar system looks sparse by comparison.

Kepler’s mission lasted twice as long as planned. Fuel exhaustion was seen in late June. Two weeks ago, the fuel pressure dropped to (zero “the last drop”) but the teams collected all the remaining data.

When we started conceiving this mission 35 years ago, we didn’t know of a single planet outside our solar system. Now that we know planets are everywhere, Kepler has set us on a new course that’s full of promise for future generations to explore our galaxy.

The Kepler space telescope launched from Earth on March 6, 2009. It was designed for an Earth-trailing heliocentric orbit, which gave the spacecraft a thermally stable environment and let it remain on a single pointing for all of the prime Kepler mission. In other words, during its prime mission, Kepler stared at a single patch of sky – with a field of view of 116 square degrees, containing approximately 150,000 stars – measuring star brightnesses within that field over and over, searching for minute dips in starlight that would indicate planets in orbit around their stars.

Does the fact that Kepler found 2,600 planets around those 150,000 stars mean that we can expect only a small fraction of stars to have planets? No, and in fact the opposite is true.

In order to detect planets, Kepler had to see a distant solar system edge-on, so that the planets were passing in front of their stars from Kepler’s point of view. Finding so many edge-on system among Kepler’s original 150,000 stars likely means that our galaxy – which has more than 100 billion stars – is likely have hundreds of billions of planets.

What has the @NASAKepler space telescope achieved during its time in space? Take a look at the numbers: https://t.co/Ei3m5dSdvh pic.twitter.com/zIgJw0gRSX

The Kepler mission was based on a very innovative design. It was an extremely clever approach to doing this kind of science. There were definitely challenges, but Kepler had an extremely talented team of scientists and engineers who overcame them.

Four years into the Kepler mission, after the primary mission objectives had been met, mechanical failures temporarily halted observations. The mission team was able to devise a fix, switching the spacecraft’s field of view roughly every three months. This enabled an extended mission for the spacecraft, dubbed K2, which lasted as long as the first mission and bumped Kepler’s count of surveyed stars up to more than 500,000. The NASA statement said:

The observation of so many stars has allowed scientists to better understand stellar behaviors and properties, which is critical information in studying the planets that orbit them. New research into stars with Kepler data also is furthering other areas of astronomy, such as the history of our Milky Way galaxy and the beginning stages of exploding stars called supernovae that are used to study how fast the universe is expanding. The data from the extended mission were also made available to the public and science community immediately, allowing discoveries to be made at an incredible pace and setting a high bar for other missions. Scientists are expected to spend a decade or more in search of new discoveries in the treasure trove of data Kepler provided.

We know the spacecraft’s retirement isn’t the end of Kepler’s discoveries. I’m excited about the diverse discoveries that are yet to come from our data and how future missions will build upon Kepler’s results.

Kepler started its mission not knowing whether Earth-sized planets were common. It ran out of fuel while observing a nearby star known to host seven. #ThanksKepler pic.twitter.com/HMfMyv1yog — Geert Barentsen (@GeertHub) October 30, 2018

Bottom line: NASA has now officially retired the highly successful Kepler planet-hunter, after nine years in space. Much of what we know about exoplanets today comes from the Kepler mission.