The Kepler mission has confirmed the first near-Earth-size planet in the habitable zone – or zone where liquid water can exist – around a sunlike star. 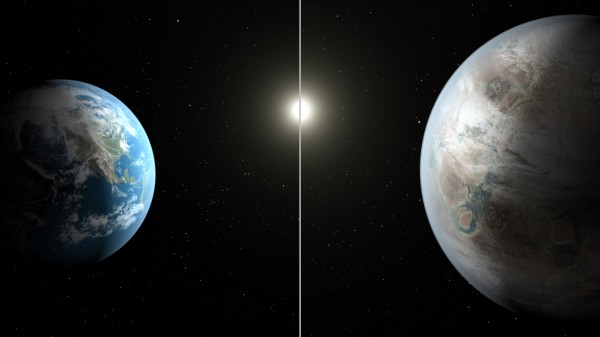 View larger. | Face to face! Artist’s concept of Earth (l) and Kepler 452b. Image via NASA.

Dreamers and visionaries have long imagined finding another Earth. This week (July 23, 2015) at a NASA teleconference, scientists with the planet-finding Kepler mission took a step closer to that dream with the discovery of the first nearly Earth-sized planet orbiting in the habitable zone – or zone where liquid water can exist – of its sunlike star. The planet is located 1,400 light-years away, in direction our constellation Cygnus the Swan. It has many similarities – and also some differences – to the world on which we stand. The Astronomical Journal has accepted the research paper reporting this finding. NASA also said:

This discovery and the introduction of 11 other new small habitable zone candidate planets mark another milestone in the journey to finding another Earth.

The first near-Earth-size planet is called Kepler-452b. It’s the smallest planet to date discovered orbiting in the habitable zone of its star. Considered a super-Earth-size planet, it’s 60 percent larger in diameter than our world. Its orbit around the sun last 385 days, only 5 percent longer than Earth’s orbit. It’s star is a G2-type, like our sun. Kepler-452b is 5 percent farther from its parent star than Earth is from our sun.

While its mass and composition aren’t yet determined, previous research suggests that planets the size of Kepler-452b have a good chance of being rocky.

It has the same temperature as Earth, and appears 20 percent brighter. 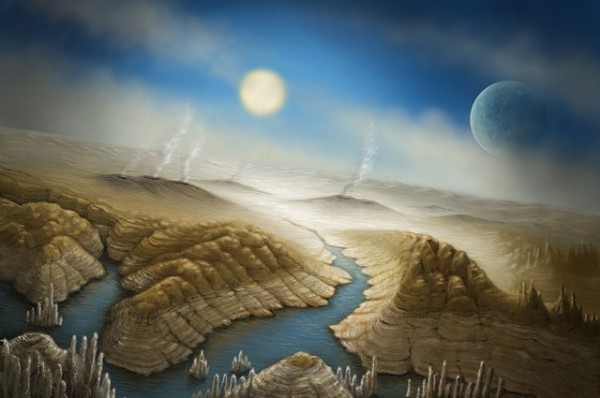 Artist’s concept of Earth cousin Kepler 452b. This world might have water and active volcanoes. Image via SETI Institute/Danielle Futselaar.

We can think of Kepler-452b as an older, bigger cousin to Earth.

It’s awe-inspiring to consider that this planet has spent 6 billion years in the habitable zone of its star; longer than Earth. That’s substantial opportunity for life to arise, should all the necessary ingredients and conditions for life exist on this planet.

To help confirm the finding and better determine the properties of the Kepler-452 system, the team conducted ground-based observations at the University of Texas at Austin’s McDonald Observatory, the Fred Lawrence Whipple Observatory on Mt. Hopkins, Arizona, and the W. M. Keck Observatory atop Mauna Kea in Hawaii.

NASA said these measurements were key for the researchers to confirm the planetary nature of Kepler-452b, to refine the size and brightness of its host star and to better pin down the size of the planet and its orbit. 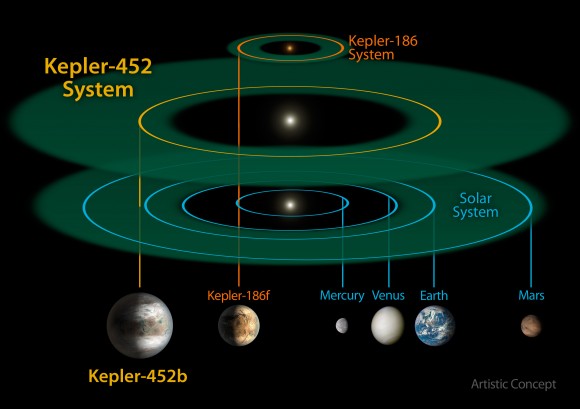 View larger. | This size and scale of the Kepler-452 system compared alongside the Kepler-186 system and the solar system. Kepler-186 is a miniature solar system that would fit entirely inside the orbit of Mercury. Image via NASA/JPL-CalTech/R. Hurt

Twelve of the new planet candidates have diameters between one to two times that of Earth, and orbit in their stars’ habitable zones. Of these, nine orbit stars that are similar to our sun in size and temperature.

Jeff Coughlin, Kepler scientist at the SETI Institute in Mountain View, California, who led the analysis of a new candidate catalog, said:

We’ve been able to fully automate our process of identifying planet candidates, which means we can finally assess every transit signal in the entire Kepler dataset quickly and uniformly. This gives astronomers a statistically sound population of planet candidates to accurately determine the number of small, possibly rocky planets like Earth in our Milky Way galaxy.

Over the past year, NASA has begun to say more often that finding signs of life – at first, perhaps, microbial life – on a distant planet like Kepler 452b is one of its major goals. In April, 2015, NASA chief scientist Ellen Stofan made a bold statement when she predicted that we would find “strong indications” of microbial life on an exoplanet within a decade. She said we would find “definite evidence” of life within 20 to 30 years.

Naturally, the discovery of Earthlike exoplanets – like Kepler 452b – is a first step.

View larger. | Since Kepler launched in 2009, twelve planets less than twice the size of Earth have been discovered in the habitable zones of their stars. Image via NASA/N. Batalha and W. Stenzel