On August 5, 2011, NASA launched the Juno spacecraft on a $1.1 billion mission to Jupiter. The craft will orbit for a year and sweep near Jupiter’s cloudtops.

This week, the NASA Juno spacecraft will embark on a $1.1 billion, five-year mission. Its goal is to spend a year in orbit around Jupiter, scrutinizing Jupiter from close range and helping to reveal the planet’s secrets. Juno is set to launch August 5, 2011 aboard an Atlas V rocket. It will take about four Earth-years to reach Jupiter, and it will orbit the planet for at least one year.

Scott Bolton, Juno principal investigator at the Southwest Research Institute in San Antonio, Texas spoke about the mission at a NASA pre-launch press conference on July 27, 2011.

The main goals of Juno are to study the origin of Jupiter. It represents giant planets as we know them, around our star as around other stars. It holds a lot of key secrets on how we formed the solar system, where Jupiter came from, and also the rest of the solar system. 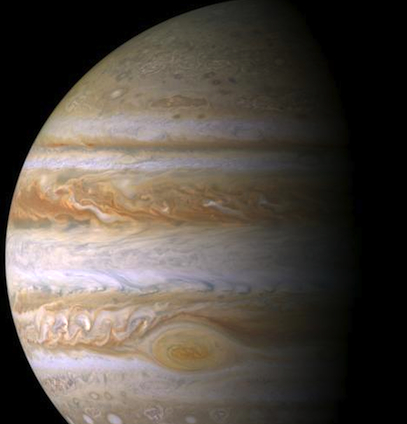 Juno will achieve mission science goals with a spinning, solar-powered spacecraft that’ll go into a unique polar orbit around Jupiter, one whose perijove – or closest point to Jupiter – is extremely close. From this close vantage point on the largest planet in our solar system, scientists will conduct two key experiments designed to understand Jupiter’s origin. Bolton said that what scientists want to know is how much water lies inside Jupiter, and to get that they’ll measure the abundance of oxygen they find.

Oxygen is the third most abundant element in the universe and in the sun. So it’s a big missing piece if we don’t understand it.

The second experiment will determine whether Jupiter has a core of heavy elements at the center, or whether it’s just gas all the way down. “So Juno’s prepared to constrain those questions and provide the answers so that we can discriminate among models of how Jupiter formed and what the history of our early solar system was,” said Bolton.

Juno will enter the first-ever polar orbit of Jupiter in 2016, when it will probe what’s beneath its thick clouds from a closer distance than any previous spacecraft. Bolton explains:

We’re only 5,000 kilometers above the cloud tops. And so we’re skimming right over those cloud tops, and we’re actually dipping down beneath the radiation belts, which is a very important thing for us. Those radiation belts of Jupiter are the most hazardous region in the entire solar system other than going right to the sun itself. And we have a vault in the middle to hold our electronics to protect them from these high energy particles. We’re basically an armored tank going to Jupiter. 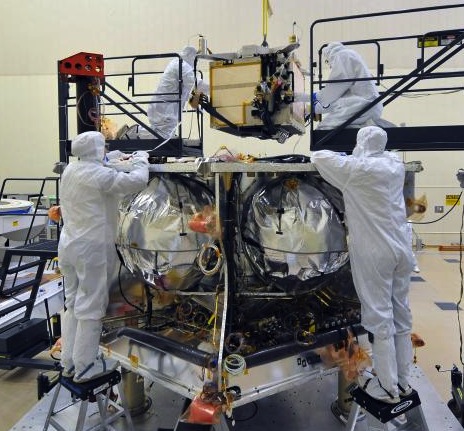 Juno’s eight scientific instruments are housed by that ‘armored tank,’ flanked by tractor-trailer-sized solar panels to proved its power as it cartwheels above the surface of Jupiter, said Bolton.

We’re solar powered. We’re the first ones to go out that far, to Jupiter’s distance, solar powered. Jupiter’s five times the distance from the sun as the Earth. So the amount of sunlight is 25 times less. So we’re very efficient. We’re pushing the envelope on solar power.

Bolton explained that Juno will probe Jupiter’s huge aurora, the biggest in the solar system.

Because we’re going over the poles, we’re perfectly suited to study the great aurora, the strongest aurora in the entire solar system. In fact, Jupiter has the strongest magnetic field and the brightest aurora. We have a number of instruments that go right over those magnetic filed lines and see the particles coming down and causing that aurora. And then when we learn about Jupiter’s polar magnetosphere and aurora, we’ll be able to compare it to Earth’s and in fact Saturn’s, which is being studied now with Cassini, with that we’ll understand the auroral processes much better.

The secrets of what makes Jupiter’s giant red spot might be revealed by the Juno mission, said Bolton.

We’ve been observing this giant storm for over 300 years. One of the fundamental questions is how deep are the roots to that red spot? How does it maintain itself for so long? How deep are the zones to the roots and belts? Are they just a surface feature, like a meteorological layer that’s very, very thin? Or do they go down deeper? Is it demonstrating to us how Jupiter is structured inside? Our microwave experiment will tell us a lot about these deep, underneath the clouds dynamics and the composition.

Bottom line: NASA will launch a spacecraft called Juno on August 5, 2011. It’ll take four years to travel to Jupiter. Once there, it’ll orbit the planet for one year in a first-ever polar orbit. It’ll sweep extremely close to the planet’s cloudtops. It will study the planet’s great red spot and its beautiful aurora, and more, and enable scientists to understand both Jupiter and Earth better.