Squyres led a committee for the U.S. National Research Council that in 2011 released a report on the future of space missions to the nearby planets in our solar system.

Each time that we send a mission, it makes new discoveries that raise new questions. 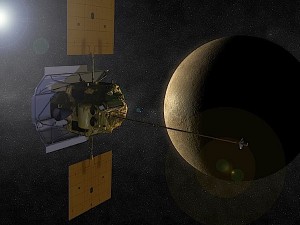 Squyres is lead scientist of the ongoing Mars Exploration Rover Mission – whose two tiny wheeled robots have beamed back hundreds of thousands of images of the planet’s surface. Squyres led a committee for the U.S. National Research Council that in 2011 released a report on the future of space missions to the nearby planets in our solar system. He told EarthSky:

We recommend continuing NASA’s program of what are called discovery missions. Those are their small, less expensive missions that have done things like discover ice at the poles of the moon, and impact into a comet.

A good example of a smaller, scrappier mission, said Squyres, is the MESSENGER mission, which in 2011 became the first spacecraft to orbit the planet Mercury. One of the next big missions recommended by Squyres and colleagues is the Mars Sample Return Mission expected to launch in 2018. 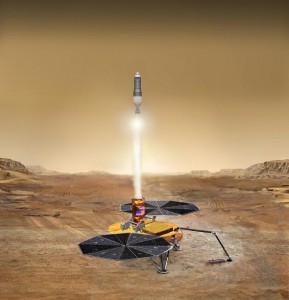 What we’re hoping to do with the Mars Sample Return Mission is bring back rocks, get them into the best laboratories on Earth, and pick rocks carefully for their potential for preserving evidence of early conditions on Mars, what it was like on the surface of Mars in the very distant past and whether or not life might have arisen there. We’re looking for evidence of the building blocks of life, maybe evidence of former life itself in those kinds of sediments.

Another big mission ahead is the Jupiter Europa Orbiter in 2020. Squyres said Jupiter’s moon Europa might have an ocean of liquid water on it beneath a cover of ice. He told EarthSky:

For the Europa mission, what you’re trying to do is you’re trying to learn what that ocean on Europa is like. What it’s going to find, I don’t know. We’ve got speculations about how thick the ice cover is. You could do calculations, and you get numbers like 10 kilometers or so. But is it really that, or is it something very different? Is it thinner? Is it thicker? Is it non-uniform? Are there places where there are cracks where water occasionally comes up to the surface? We simply don’t know. So these are the kinds of things that we’re going to try to find out.

Sqyyres said that the challenge is to come up with a balanced program of exploration that goes after a number of key scientific questions. He said:

There are questions related to life, inhabitability of the solar system. And obviously, those are a primary focus for some of those flagship missions, those big, complicated missions. But then there’s the understanding of how solar systems form, and understanding the processes that have caused planets to look the way that they do, and processes that are ongoing in the solar system. We’ve got a set of missions that really try to go in a balanced way after all those sorts of questions.

We asked Squyers how the choices were made in judging one space science program over another. He said:

We used several criteria. The most was bang for the buck – science return per dollar. We judged carefully the science return of each of these missions by pulling together the best group of scientific experts that we could and drawing on their expertise. In order to figure out the cost, we did detailed technical studies of each of the missions and then subjected them to a very comprehensive, independent cost evaluation.

That was a very valuable and enlightening process. And there was a fair amount of sticker shock. Some of these turned out to be pretty expensive.

Squyres told EarthSky that he thinks that it’s important for people to know that the next ten years of planet exploration is highly uncertain. He said:

We have a plan of exploration that’s very, very exciting. But it needs to be funded. And some of the current budget projections would have the funding for the program declining precipitously. And so what I am hoping is that this report, and this plan can be used as a way to rally public support for continued planetary exploration.

The U.S. National Research Council’s report on the future of space missions to the nearby planets in our solar system was released in March 2011.