Scientists in Sweden say that Jupiter – largest planet in our solar system – formed 4 times farther away from the sun than its current orbit. They believe it moved inward toward the sun in a journey lasting 700,000 years. 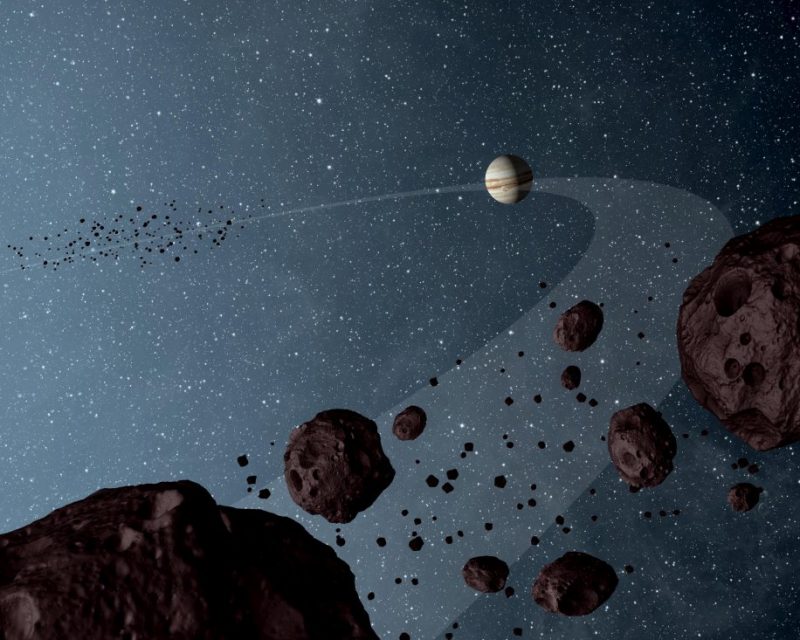 Artist’s concept of Jupiter’s Trojan asteroids. A group moves in front of the gas giant and a group follows behind. Image via NASA/JPL-Caltech.

According to new research from Lund University in Sweden, the planet Jupiter formed four times farther from the sun than its current orbit. Its migration inward through the solar system to its current orbit took only 700,000 years. The new study was published February 12, 2019, in the journal Astronomy and Astrophysics. The evidence for Jupiter’s journey comes from in an analysis of asteroids that move in the same orbit as Jupiter, in front of and behind the planet.

Astronomers know that gas giants planets around other stars are often very close to their star. According to current theory, these gas planets formed far away and later migrated inward toward their stars. Could that have happened in our own solar system?

For the new study, a team of researchers used computer calculations to trace Jupiter’s history in our solar system starting 4.5 billion years ago. Jupiter was then newly formed, as were the other planets in the solar system. The planets were gradually built up by the cosmic dust, which revolved around our young sun in a flat disk of gas and dust. At that time, said the study, Jupiter was no bigger than our own planet and about four times farther away from the sun than its current position.

Astronomer Simona Pirani of Lund University is the study’s lead author. She said in a statement:

This is the first time we have evidence that Jupiter was formed far from the sun and then migrated to its current path.

The study also made calculations on the gas giant Saturn and the ice giant planets Uranus and Neptune. The researchers think that even these giant planets must have migrated in the same way as Jupiter. Pirani said:

The evidence for the migration can be found in the Trojan asteroids that revolve around the sun near Jupiter.

The Trojans are a large group of asteroids that share Jupiter’s orbit around the sun. They consist of two groups of thousands of asteroids that lie in front of and behind Jupiter, respectively. There are about 50 percent more Trojans in front of Jupiter than behind, and this asymmetry turned out to be key for scientists in understanding Jupiter’s migration.

The research world has so far been unable to explain why the two asteroid groups are different in size. Anders Johansen, Professor of Astronomy at Lund University, is a study co-author. Johansen said:

This asymmetry has been a mystery in the solar system.

The new study investigated the asymmetry by recreating the sequence of events in Jupiter’s formation and the planet’s gradual capture of its Trojan asteroids. Using computer simulations, the researchers calculated that the current asymmetry could only have occurred if Jupiter was formed four times farther away in the solar system and then migrated to its present location. During the journey to the sun, Jupiter’s own gravity captured more Trojans in front of it than behind it.

According to the researchers’ calculations, Jupiter’s migration took around 700,000 years, starting about 2 to 3 million years after Jupiter began its life as asteroid far from the sun. The journey inward into the solar system took place in a spiral-shaped movement, say the researchers, where Jupiter continued to circle around the sun but in an increasingly narrow path. The underlying reason for the migration itself has to do with gravity forces from the surrounding gas in the solar system.

The computer simulations show that the Trojan asteroids were captured when Jupiter was a young planet without a gas body, which means that these asteroids most likely consist of similar building blocks to the ones that formed Jupiter’s interior.

Source: The consequences of planetary migration on the minor bodies of the early Solar System