Jupiter’s Red Spot gets taller as it shrinks

Scientists have noticed that Jupiter’s Great Red Spot has been getting smaller over time. New evidence says the storm is getting taller – and more orange – as it shrinks.

Jupiter’s Great Red Spot was once big big enough to swallow three Earths with room to spare. But scientists say that the huge storm has been shrinking for a century and a half. Nobody is sure how long the gigantic, swirling storm will continue to contract, or whether it will disappear altogether.

But a new study, published in the peer-reviewed Astronomical Journal on March 13, 2018, suggests that the gigantic storm has increased in area at least once along the way, and it’s growing taller as it gets smaller.

Jupiter’s Great Red Spot is a giant oval of crimson-colored clouds in Jupiter’s southern hemisphere. The clouds race counterclockwise around the oval’s perimeter with wind speeds greater than any storm on Earth. Measuring 10,000 miles (16,000 km) in width as of April 2017, the Great Red Spot is 1.3 times as wide as Earth. This looping animation simulates the motion of clouds in the Great Red Spot. Image via NASA/JPL-Caltech/SwRI/MSSS/Gerald Eichstadt/Justin Cowart.

Amy Simon is an expert in planetary atmospheres at NASA’s Goddard Space Flight Center in Greenbelt, Maryland, and lead author of the new paper. She said in a statement:

Storms are dynamic, and that’s what we see with the Great Red Spot. It’s constantly changing in size and shape, and its winds shift, as well.

The study confirms that the storm has been decreasing in length overall since 1878 and is big enough to accommodate just over one Earth at this point. But the historical record indicates the area of the spot grew temporarily in the 1920s. Reta Beebe, an emeritus professor at New Mexico State University in Las Cruces, is a study co-author. Beebe said:

There is evidence in the archived observations that the Great Red Spot has grown and shrunk over time. However, the storm is quite small now, and it’s been a long time since it last grew.

Because the storm has been contracting, the researchers expected to find the already-powerful internal winds becoming even stronger, like an ice skater who spins faster as she pulls in her arms. But instead of spinning faster, the storm appears to be forced to stretch up, like clay being shaped on a potter’s wheel. As the wheel spins, an artist can transform a short, round lump into a tall, thin vase by pushing inward with his hands. The smaller he makes the base, the taller the vessel will grow. In the case of the Great Red Spot, the change in height is small relative to the area that the storm covers, but still noticeable, say the researchers.

The Great Red Spot’s color has been deepening, too, becoming intensely orange since 2014. Researchers aren’t sure why that’s happening, but say it’s possible that the chemicals which color the storm are being carried higher into the atmosphere as the spot stretches up. At higher altitudes, the chemicals would be subjected to more UV radiation and would take on a deeper color. 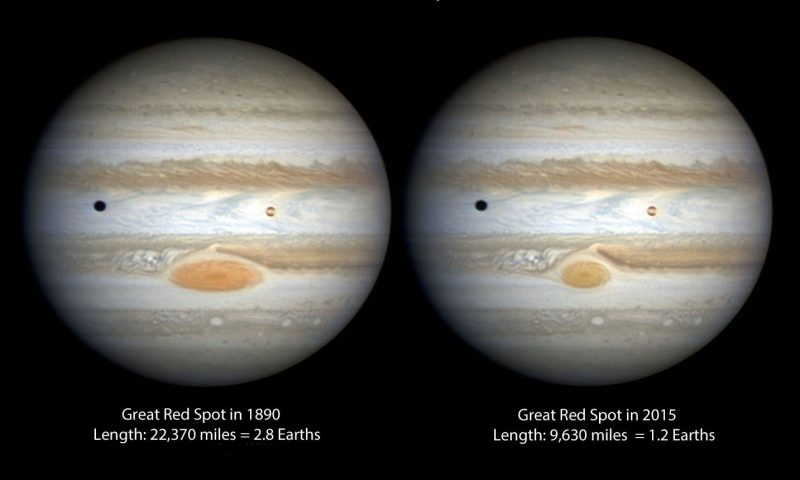 Graphical comparison showing how Jupiter’s Great Red Spot has shrunk in the past 125 years. Image via Damian Peach/Universe Today.

Observations of Jupiter date back centuries, but the first confirmed sighting of the Great Red Spot was in 1831. Since then, observers have been able to measure the size and drift of the Great Red Spot by fitting their telescopes with an eyepiece scored with crosshairs. A continuous record of at least one observation of this kind per year dates back to 1878.

For the current study, the researchers drew on this archive of historical observations and combined them with data from NASA spacecraft, starting with the two Voyager missions in 1979. In particular, the group relied on a series of annual observations of Jupiter that team members have been conducting with NASA’s Hubble Space Telescope as part of the Outer Planets Atmospheres Legacy, or OPAL, project.

The team traced the evolution of the Great Red Spot, analyzing its size, shape, color and drift rate. They also looked at the storm’s internal wind speeds, when that information was available from spacecraft.