NASA’s Juno mission to Jupiter has now successfully executed a 10.5-hour propulsive maneuver. It’ll keep Juno – a solar-powered spacecraft – out of a mission-ending shadow due to have been cast by Jupiter onto the craft in November.

View larger. | In this animated gif, you’re riding on the Juno spacecraft – now in orbit around Jupiter – as it approaches Jupiter. An orbit adjustment this week has ensured the solar-powered spacecraft won’t end its mission in Jupiter’s shadow on November 3. Here, you can see Jupiter’s rings and auroras. The distant sun is depicted as the yellow dot rising up just to the left of the planet. Image via NASA/JPL-Caltech/SwRI.

Since its launch in 2011, the Juno mission to Jupiter has been the little spacecraft that could, thanks to the persistence of its controllers. The craft – first to orbit Jupiter since the Galileo mission (1995-2003) – traveled nearly 2 billion miles to Jupiter and entered a highly elliptical, 53-day polar orbit around the planet on July 5, 2016. The craft was expected to enter a 14-day science orbit a few months later, but a suspected problem in Juno’s main engine nixed that idea. So Juno has remained in its 53-day orbit. It flies out a million miles from the giant planet on each circuit, then sweeps in to within 3,000 miles (5,000 km) from Jupiter’s cloudtops, all the while doing science and advancing our knowledge about our solar system’s largest planet. Then, more recently, space engineers realized that – during the solar-powered spacecraft’s next close flyby of the planet on November 3, 2019 – Juno would be flying through Jupiter’s shadow for some 12 hours. That would have been long enough to drain the spacecraft’s batteries and end the mission! But now a successful propulsive maneuver has saved the day. Its controllers confirm it will now stay out of the shadow … and survive to continue doing science.

Space engineers at NASA’s Jet Propulsion Laboratory in Pasadena, California, began executing the maneuver on September 30, 2019, at 7:46 p.m. EDT (23:46 UTC) and completed it early on October 1. In all, the maneuver lasted 10.5 hours, an extraordinarily long time by Juno mission standards. NASA said in a statement:

Using the spacecraft’s reaction-control thrusters, the propulsive maneuver lasted five times longer than any previous use of that system. It changed Juno’s orbital velocity by 126 mph (203 kph) and consumed about 160 pounds (73 kilograms) of fuel. Without this maneuver, Juno would have spent 12 hours in transit across Jupiter’s shadow – more than enough time to drain the spacecraft’s batteries. Without power, and with spacecraft temperatures plummeting, Juno would likely succumb to the cold and be unable to awaken upon exit.

Scott Bolton of the Southwest Research Institute in San Antonio is Juno’s principal investigator. He said:

With the success of this burn, we are on track to jump the shadow on November 3.

Jumping over the shadow was an amazingly creative solution to what seemed like a fatal geometry. Eclipses are generally not friends of solar-powered spacecraft. Now instead of worrying about freezing to death, I am looking forward to the next science discovery that Jupiter has in store for Juno.

Pre-launch mission planning did not anticipate a lengthy eclipse that would plunge our solar-powered spacecraft into darkness. That we could plan and execute the necessary maneuver while operating in Jupiter’s orbit is a testament to the ingenuity and skill of our team, along with the extraordinary capability and versatility of our spacecraft.

Thus – despite its initial difficulties and this most recent potential heart-stopper – Juno will survive to continue its mission and its contributions to science. 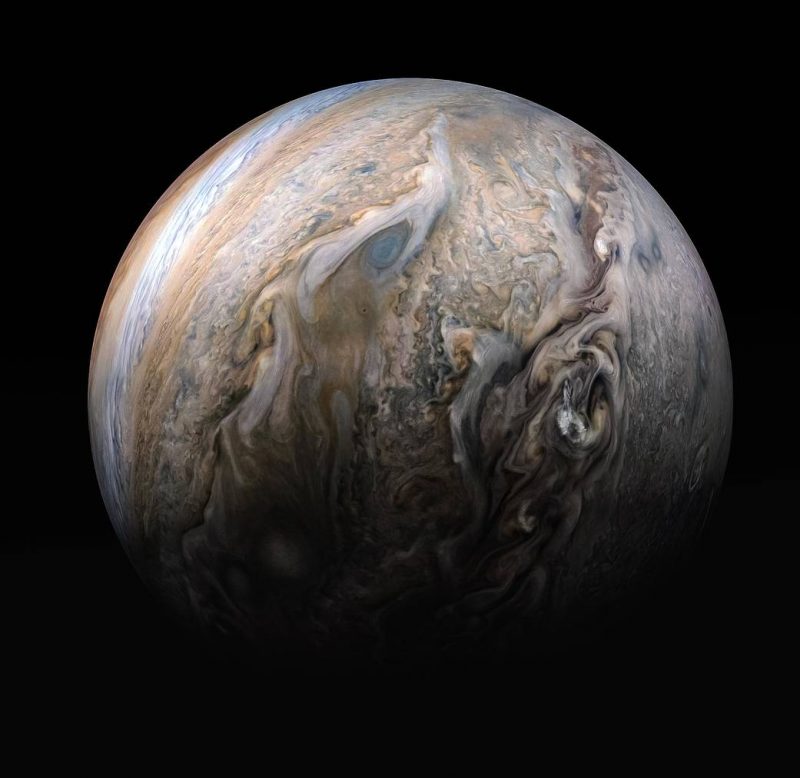 Not your typical view of Jupiter, is it? Juno took the 4 images used to produce this color-enhanced view on May 29, 2019, as the spacecraft performed its 20th science pass of Jupiter. At the time the images were taken, the spacecraft was between 11,600 miles (18,600 kilometers) and 5,400 miles (8,600 kilometers) above Jupiter’s cloud tops, above a northern latitude spanning from about 59 to 34 degrees.Citizen scientist Kevin M. Gill created this image using data from the spacecraft’s JunoCam imager. Read more about this image. Image via Juno Image Gallery.

Bottom line: On September 30 to October 1, 2019, NASA’s Juno mission to Jupiter successfully executed a 10.5-hour propulsive maneuver designed to enable the spacecraft to avoid Jupiter’s shadow on November 3. Without the maneuver, the craft would have spent some 12 hours in the shadow, draining its solar-powered batteries and perhaps ending its mission.