It was a flash of light seen on the edge of moon during the total lunar eclipse of January 20-21, 2019. Now astronomers have analyzed this meteor strike, the first ever filmed during an eclipse.

Observers watching the January 20-20, 2019. total eclipse of the moon saw a rare event, a short-lived flash as a meteorite hit the lunar surface.

Astronomers say it’s the first time an event of its kind has been filmed.

A new analysis by Spanish astronomers says the space rock collided with the moon at 38,000 miles per hour (61,000 km/hour) excavating a crater 33-50 feet (10-15 meters) across. The study was published April 27, 2019, in the peer-reviewed journal Monthly Notices of the Royal Astronomical Society.

The January 20-21 total lunar eclipse was the last one until May 2021, with observers in North and South America and western Europe enjoying the best view. At 4:41 UTC, just after the total phase of the eclipse began, there was a flash on the lunar surface. Widespread reports from amateur astronomers indicated the flash – attributed to a meteorite impact – was bright enough to be seen with the naked eye.

Meanwhile, researchers at the Moon Impacts Detection and Analysis System (MIDAS) in the south of Spain used eight telescopes to monitor the lunar surface. Video footage from MIDAS recorded the moment of impact. The impact flash lasted 0.28 seconds and is the first ever filmed during a lunar eclipse, despite a number of earlier attempts. MIDAS telescopes observed the impact flash at multiple wavelengths (different colors of light), improving the analysis of the event.

The scientists assessed the impact energy as equivalent to 1.5 tonnes (1.7 tons) of TNT, enough, they said, to create a crater about the size of two double decker buses side by side. They estimated that the debris that was ejected when the rock hit reached a peak temperature of 9,800 degrees F (5,400 degrees C), roughly the same temperature as the surface of the sun. 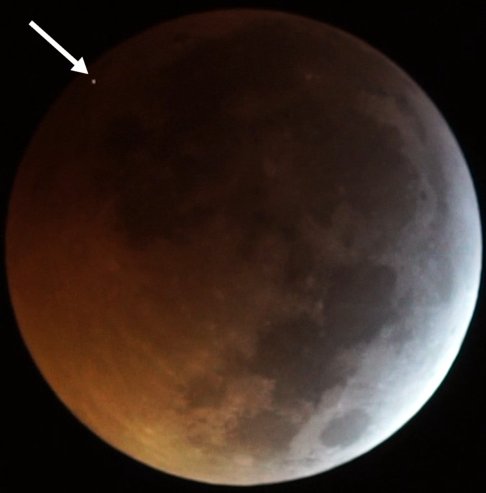 The flash from the impact of the meteorite on the eclipsed moon, seen as the dot at top left (indicated by the arrow), as recorded by two of the telescopes operating in the framework of the MIDAS Survey from Sevilla (Spain) on January 21. 2019. Image via J.M. Madiedo/MIDAS.

Unlike Earth, the moon has no atmosphere to protect it and so even small space rocks can hit its surface. Since these impacts take place at huge speeds, the rocks instantaneously vaporize upon impact, producing a glowing plume of debris that can be detected from Earth as short-duration flashes. Jose Maria Madiedo of the University of Huelva is a study co-author. He said in a statement:

It would be impossible to reproduce these high-speed collisions in a lab on Earth. Observing flashes is a great way to test our ideas on exactly what happens when a meteorite collides with the moon.

Here at EarthSky, we heard from one of our community members, Greg Hogan in Kathleen, Georgia, after eclipse night. He wrote:

I reviewed my images from the other night, and I am showing in the news reports that the impact happened at 11:41 eastern time … I’m pretty excited!

You can see two of Greg’s photos below, with the meteorite flash marked by an arrow. 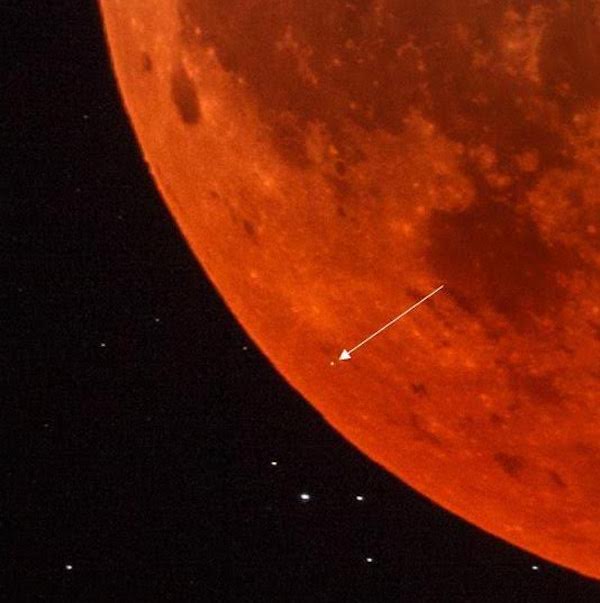 View larger at EarthSky Community Photos. | This flash on the red, eclipsed moon came from a meteorite strike! EarthSky friend Greg Hogan in Kathleen, Georgia, was one of the first to notice he’d caught the flash on film. Thanks for the heads up, Greg! 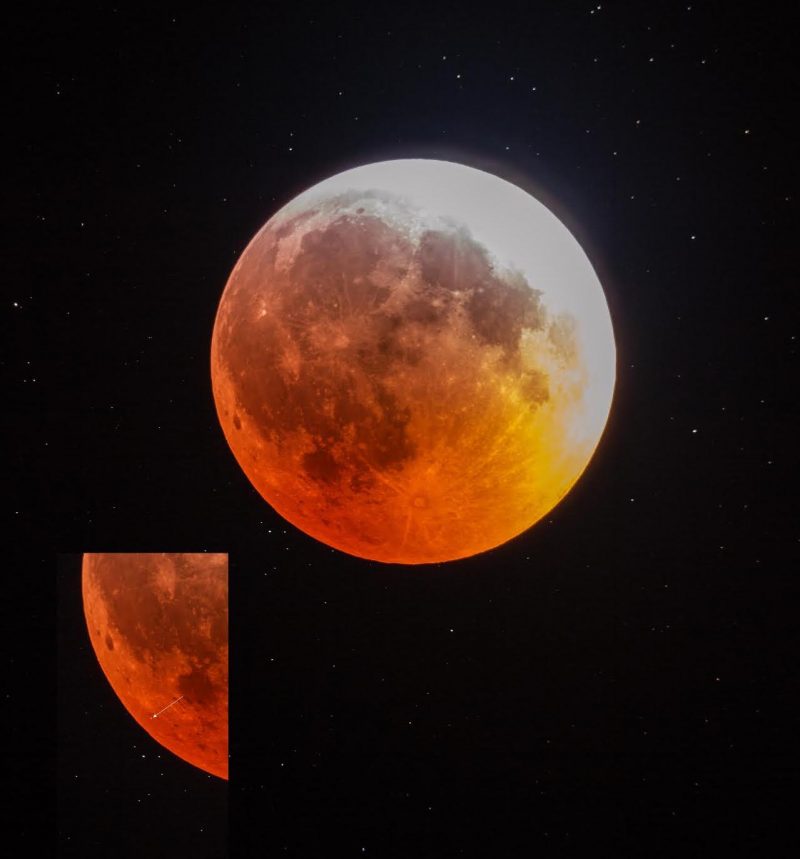 Bottom line: Astronomers say that a meteorite that hit the moon during the January 20-21 lunar eclipse created a crater 33-50 feet (10-15 meters) across.