Space-based observatories detected a violent explosion in a galaxy billions of light-years away. It became the brightest source of high-energy cosmic gamma rays seen so far. Specialized Earth-based telescopes detected it via faster-than-light particles cascading through Earth’s atmosphere. 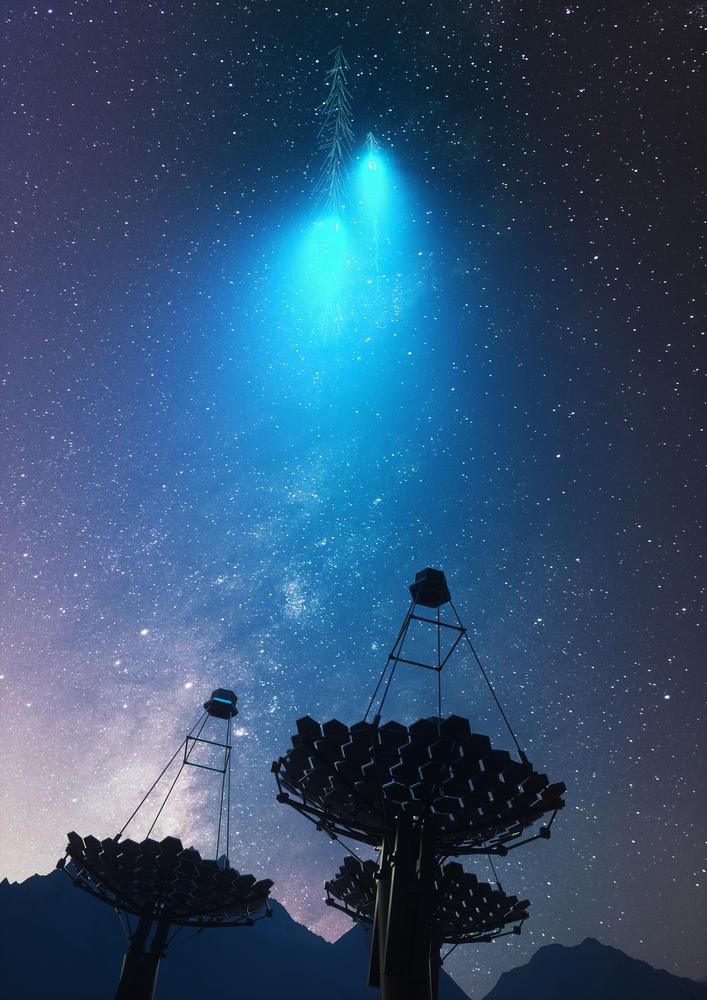 On January 14, 2019, two NASA space observatories – Swift and Fermi – detected a burst of gamma rays from a source billions of light-years away. That’s not unusual in and of itself; these space telescopes detect gamma ray bursts about once daily, routinely sending automatic alerts to other gamma-ray observatories around the world. But this burst – labeled GRB 190114C – was different. It became the most powerful yet detected by a specialized telescope on Earth’s surface, where scientists registered the highest energy gamma rays ever measured from a gamma ray burst, reaching about 100 billion times as much energy as visible light. The MAGIC telescope in the Canary Islands was able to point to the region of origin so quickly that it began observing the event within only 57 seconds of the space-based observations. Its scientists presented their observations last week (November 20, 2019) in two independent studies in the peer-reviewed journal Nature.

In the same issue of Nature, scientists presented a study of an earlier gamma ray burst – labeled GRB 180720B – not as strong but also detected on the ground via the H.E.S.S. telescope in Namibia on July 20, 2018. Read an overview of the three Nature studies here.

These two ground-based detections – from January 2019 and July 2018 – are the first detections of gamma-ray bursts with ground-based gamma-ray telescopes. They come after many years of trying to catch such events.

The power of these cosmic explosions is mind-boggling. But their detection is fascinating as well. The ground-based H.E.S.S. and MAGIC telescopes didn’t detect the gamma rays directly. They detected their effect on Earth’s atmosphere, via faster-than-light particles known as Cherenkov radiation. The Deutsches Elektronen-Synchrotron (DESY) – a national research center in Germany that operates particle accelerators and that also plays a role in operating both H.E.S.S. and MAGIC – explained in a statement:

When an energetic cosmic gamma ray hits Earth’s atmosphere, it shatters molecules and atoms. This process creates an avalanche of particles called an air shower. The shower particles are so energetic that they move faster through the air than light – although not faster than light in a vacuum, which according to Albert Einstein’s theory of relativity is the absolute upper speed limit. The result is a bluish glow, a kind of optical counterpart to the supersonic bang. This Cherenkov light, named after its discoverer, can be observed by Cherenkov telescopes such as those of the H.E.S.S. and MAGIC observatories … 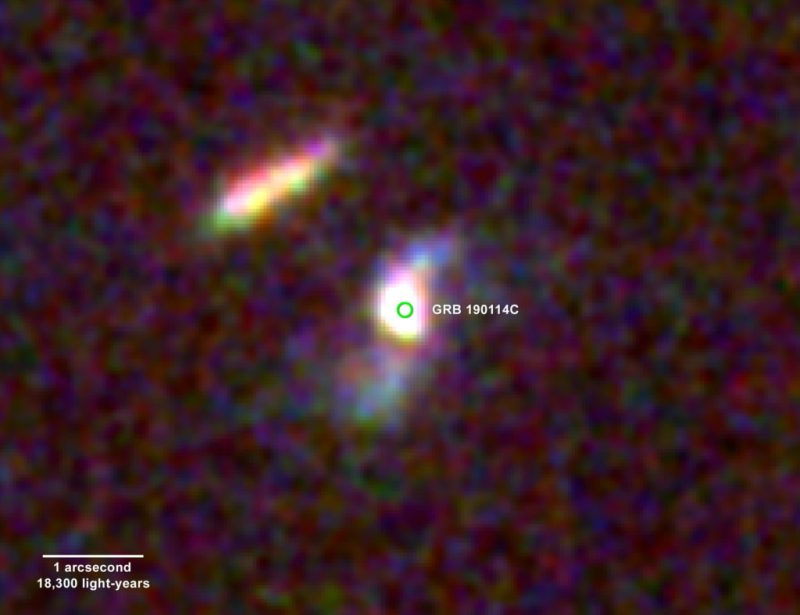 The Hubble Space Telescope caught the fading afterglow of GRB 190114C and its home galaxy on February 11 and March 12, 2019. The difference between these images reveals a faint, short-lived glow (center of the green circle) located about 800 light-years from the galaxy’s core. Blue colors beyond the core signal the presence of hot, young stars, indicating that this is a spiral galaxy somewhat similar to our own. The source of the burst is located about 4.5 billion light-years away in the direction of the constellation Fornax. Image via NASA/ESA/V. Acciari et al./ICRAR.

Gamma-ray bursts – called GRBs by scientists – are sudden, short bursts of gamma radiation from the cosmos. They were discovered by chance at the end of the 1960s by satellites used to monitor compliance with the nuclear test ban on Earth. These bursts are thought to originate from colliding neutron stars or supernova explosions. David Berge, head of gamma-ray astronomy at DESY, said:

Gamma-ray bursts are the most powerful explosions known in the universe and typically release more energy in just a few seconds than our sun during its entire lifetime – they can shine through almost the entire visible universe.

The detection of these two recent gamma ray bursts by these ground-based observatories was a culmination of years of effort by astronomers. 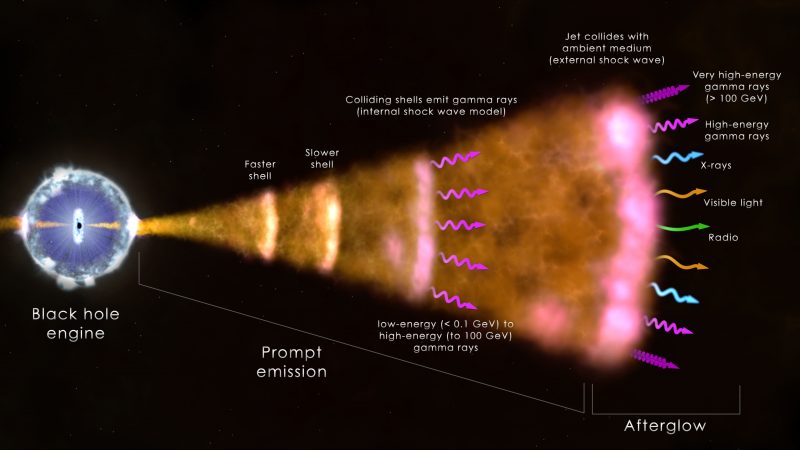 View larger. | What are gamma ray bursts? They are cosmic explosions, with radiation up to a trillion times the energy of visible light. This illustration shows the set-up for the most common type of gamma ray burst. The core of a massive star (left) has collapsed and formed a black hole. This “engine” drives a jet of particles that moves through the collapsing star and out into space at nearly the speed of light. The prompt emission, which typically lasts a minute or less, may arise from the jet’s interaction with gas near the newborn black hole and from collisions between shells of fast-moving gas within the jet (internal shock waves). The afterglow emission occurs as the leading edge of the jet sweeps up its surroundings (creating an external shock wave) and emits radiation across the spectrum for some time — months to years, in the case of radio and visible light, and many hours at the highest gamma-ray energies yet observed. These far exceed 100 billion electron volts (GeV) for two recent GRBs. Image via NASA’s Goddard Space Flight Center/ICRAR.

One reason the result could be achieved was that – when space-based observatories detect a gamma ray burst – they quickly alert the entire observational community. In the case of the January 2019 gamma ray bust, more than 20 different telescopes were able to obtain a deeper look at the burst’s source. DESY said:

This allowed [them] to pinpoint the details of the physical mechanism responsible for the highest-energy emission, as described in the second paper led by the MAGIC collaboration. Follow-up observations placed GRB 190114C at a distance of more than four billion light-years. This means, its light travelled more than four billion years to us, or about a third of the current age of the universe.

GRB 180720B, at a distance of six billion light years even further away, could still be detected in gamma rays at energies between 100 and 440 billion electron volts long after the initial blast.

The detection came quite unexpected, as gamma-ray bursts are fading fast, leaving behind an afterglow which can be seen for hours to days across many wavelengths from radio to X-rays, but had never been detected in very-high-energy gamma rays before.

This success is also due to an improved follow-up strategy in which we also concentrate on observations at later times after the actual star collapse.

Read more about these recent gamma ray bursts via DESY

Read more about these recent gamma ray bursts via ICRAR 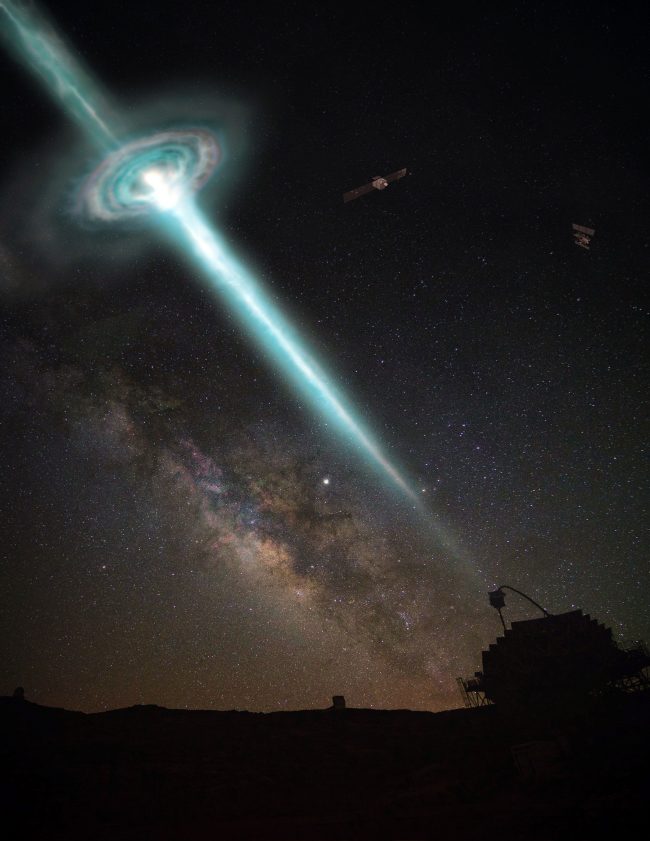 Artist’s concept of the January 14, 2019, gamma ray burst, caught by the MAGIC observatory in the Canary Islands. Image via Superbossa.com/C. Righi/ICRAR.

Bottom line: On January 14, 2019, space-based observatories detected a violent explosion in a galaxy billions of light-years away. GRB 190114C became the brightest source of high-energy cosmic gamma rays seen so far. The MAGIC telescope in the Canary Islands was able to detect it via faster-than-light Cherenkov radiation cascading through Earth’s atmosphere. This observation – combined with a similar observation of another gamma ray burst, GRB 180720B, from July 2018 – were the successful culmination of years of effort by astronomers.