Will the Webb telescope be able to detect life signs at nearby exoplanets?

The Webb Telescope is Hubble’s successor, due to launch in 2021. A new study says it’ll be powerful enough to search for life signatures in the atmospheres of the 7 Earth-sized planets in the TRAPPIST-1 system, just 39 light-years away. 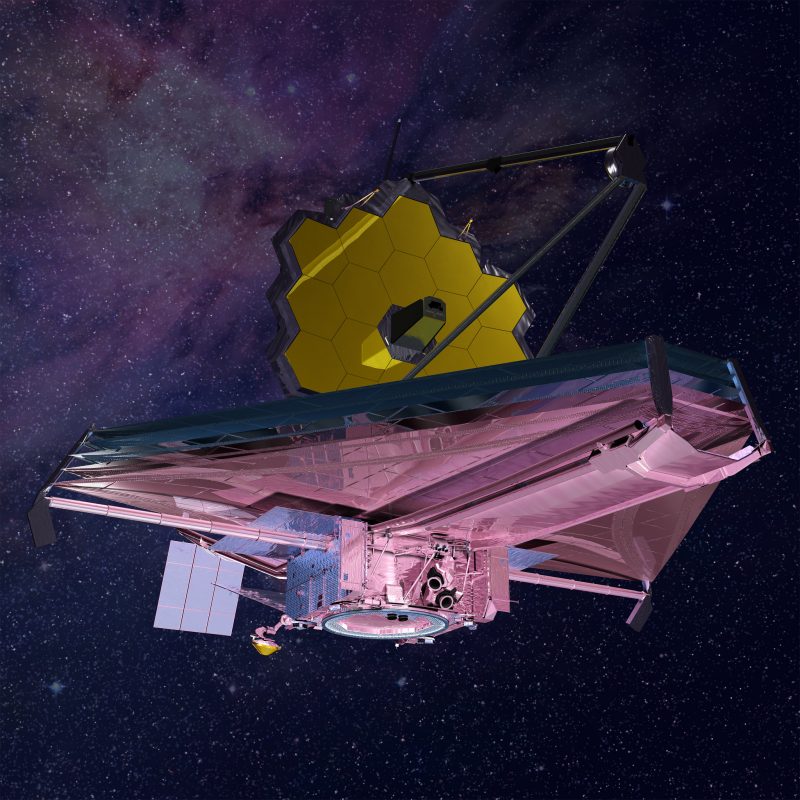 Artist’s concept of the James Webb Space Telescope as it’ll appear once it’s launched to Earth-orbit in 2021. Want to see how the actual telescope looks now? See the bottom of this post. Image via Northrop Grumman/JWST.

Only 39 light-years from Earth – right next door, cosmically-speaking – there’s a solar system with seven Earth-sized rocky planets. The system is called TRAPPIST-1. All of its seven planets are intriguing, and three of them orbit in their star’s habitable zone, where temperatures could allow liquid water to exist on them.

These worlds have been the subject of much study in the past few years, but there are limits to what current telescopes can learn more about them. What’s more, there’s been a debate about whether the James Webb Space Telescope – Hubble’s successor, scheduled for launch in March of 2021 – will be powerful enough to detect life signs at the distance of these Earth-sized planets, if indeed life signs do exist there. But now a new study says, yes, the Webb will be able to analyze their atmospheres for biosignatures. What’s more, the study says, this analysis could be done in only a year, although clouds in the planets’ atmospheres might pose a problem.

The new paper was first published on June 21, 2019 in The Astronomical Journal, and the study was led by Jacob Lustig-Yaeger, an astronomy student at the University of Washington.

The Webb telescope has been built, and we have an idea how it will operate. We used computer modeling to determine the most efficient way to use the telescope to answer the most basic question we’ll want to ask, which is: Are there even atmospheres on these planets, or not? 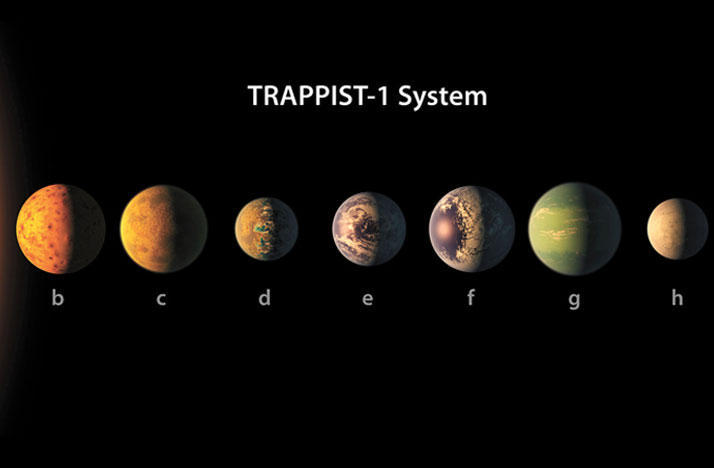 Artist’s concept of the 7 Earth-sized exoplanets in the TRAPPIST-1 planetary system. Image via R. Hurt/T. Pyle/NASA/JPL-Caltech/WOSU.

All seven of the known planets in the TRAPPIST-1 system are rocky, and of a similar size to Earth. They all orbit close to their star, but since the star a red dwarf and cooler than the sun, that means that three of the planets are still in the star’s habitable zone, where temperatures could make liquid water possible, depending on other factors such as type of atmosphere. It is expected that most or all of the planets have atmospheres, but that isn’t known for certain yet. The Webb telescope will be able to confirm that, and analyze those atmospheres for possible biosignatures, gases like oxygen or methane that could indicate life on the surfaces. According to Lustig-Yaeger:

There is a big question in the field right now whether these planets even have atmospheres, especially the innermost planets. Once we have confirmed that there are atmospheres, then what can we learn about each planet’s atmosphere, the molecules that make it up?

The study suggests that the Webb telescope should be able to detect and analyze any atmospheres fairly quickly, in a year or so. Since the planets are all close to their star, that means their transit times – the time it takes for a planet to cross in front of its star from our viewpoint – are relatively short. The Webb should be able to confirm the atmospheres (or not) in 10 transits or less. 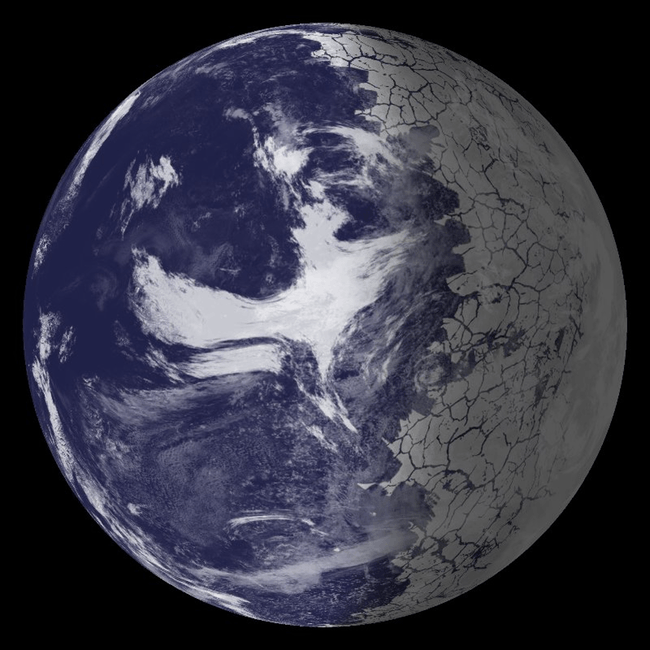 Artist’s concept of TRAPPIST-1e, which scientists think has the best chance of having a habitable atmosphere and an ocean like Earth. Image via NOAA/Inverse.

This does also, however, depend on whether those atmospheres have clouds. If a planet had a thick cloudy atmosphere like Venus,  it could take up to 30 transits to confirm it. So the Webb telescope could still do it, it would just take longer, Lustig-Yaeger said:

But that is still an achievable goal. It means that even in the case of realistic high-altitude clouds, the James Webb telescope will still be capable of detecting the presence of atmospheres, which before our paper was not known.

The James Webb Space Telescope’s capability of detecting the atmospheres of smaller rocky planets is exciting, since other telescopes haven’t been able to yet. It’s a lot easier with gas giant planets like Jupiter, but difficult with smaller planets when they are so far away.

Another possibility is that the Webb will find evidence of water that the planets lost when the system was much younger and the star was much hotter. In such cases, an atmosphere could contain abiotic oxygen – not created by life – that might be a false positive signal of active biology. Scientists would need to determine if the oxygen is biotic or abiotic. 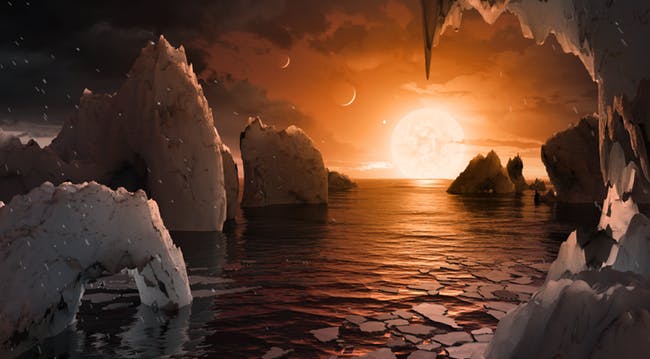 Artist’s concept of the surface of TRAPPIST-1f. Image via Inverse.

The James Webb Space Telescope will be invaluable for studying rocky planets like Earth, astronomers say, and many more of these rocky worlds are being discovered all the time in the vast space of our Milky Way galaxy. It is estimated that there are billions of such worlds in our galaxy alone, and the Webb might provide the first compelling evidence for life on one (or more) of them. Even if it doesn’t, though, it will help to revolutionize our understanding of these planets. As noted by astronomy doctoral student Andrew Lincowski:

By doing this study, we have looked at: What are the best-case scenarios for the James Webb Space Telescope? What is it going to be capable of doing? Because there are definitely going to be more Earth-sized planets found before it launches in 2021.

The TRAPPIST-1 planetary system is unique among such systems as known so far, with seven Earth-sized exoplanets. Could any of them have life? They are ideal candidates for further study by the Webb, which may be able to help answer that intriguing question in the relatively near future. As Lustig-Yaeger added:

It’s hard to conceive in theory of a planetary system better suited for James Webb than TRAPPIST-1. 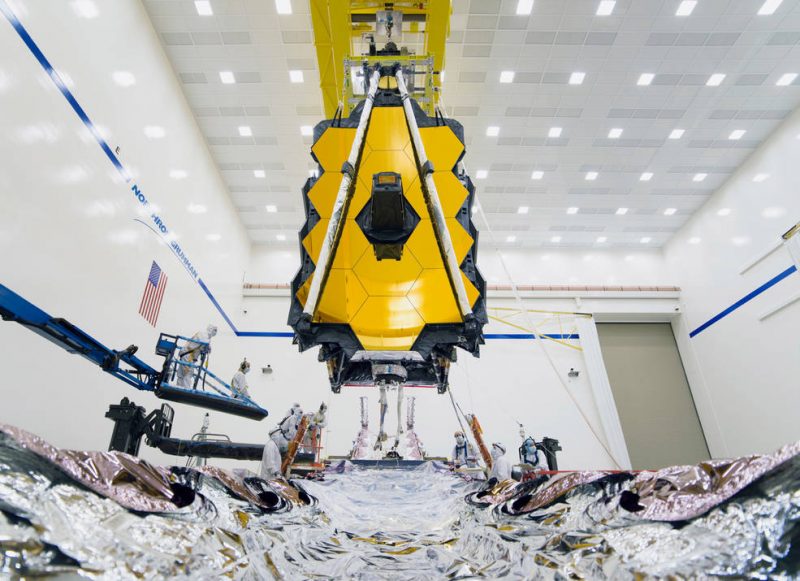 On August 28, 2019, NASA announced that the two halves of the James Webb Space Telescope have now been successfully connected. The telescope is being assembled at Northrop Grumman’s facilities in Redondo Beach, California. Read more.

Bottom line: For the first time, scientists will be able to study the atmospheres of the seven Earth-sized exoplanets in the TRAPPIST-1 system, using the James Webb Space Telescope, Hubble’s successor, due to launch in 2021.

Source: The Detectability and Characterization of the TRAPPIST-1 Exoplanet Atmospheres with JWST