The James Webb Space Telescope – successor to the Hubble – just passed a series of environmental testing trials, designed to simulate the rigors of its anticipated launch in 2021.

NASA said on October 6, 2020, that its James Webb Space Telescope has taken another step toward its highly anticipated October 2021 launch, after it passed a series of “environmental testing” trials designed to simulate the considerable rigors of launch. The tests took place at the Northrop Grumman aerospace facility in Redondo Beach, California, where the telescope’s final assembly was also completed in collaboration with NASA engineers.

The Webb is an infrared space telescope that’s planned to succeed the Hubble Space Telescope as NASA’s flagship space observatory in support of astrophysical studies of the distant universe. Find a comparison of the Webb and Hubble telescopes here. The Webb was originally scheduled for 2007, but has undergone many delays including a major redesign in 2005. Despite the setbacks, astronomers and astronomy enthusiasts are thrilled about the Webb’s upcoming launch.

Although each component of the Webb telescope has been individually tested during development, this recent demonstration that the assembled flight hardware can handle environmental extremes is a significant achievement for the mission, NASA said.

Technicians exposed the fully assembled observatory to intense acoustics in a special chamber, blasting it with sounds that topped 140 decibels. For comparison, thunder is heard at 130 decibels; the sound of fireworks at about 150 decibels. Webb was then placed on a special shake table, which rattled the telescope with low-frequency vibrations and shakes comparable to what it will feel during its upcoming launch. 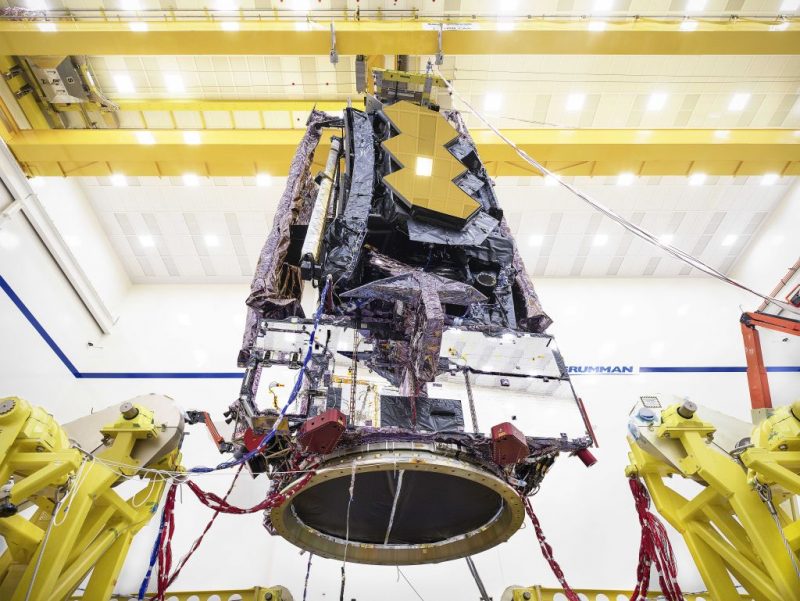 For the first time ever, testing teams at Northrop Grumman in Redondo Beach, California, carefully lifted the fully assembled James Webb Space Telescope in order to prepare it for transport to nearby acoustic and vibration testing facilities. Image via NASA/ Chris Gunn.

Putting the telescope through a simulated launch environment is the best way to ensure it’s ready for the real thing. And if anything goes awry, it would be far more convenient to address and/or repair here on Earth soil rather than when it’s a million miles out of any human’s reach … literally. However, fortunately, the testing went according to plan. Bill Ochs, Webb project manager at NASA’s Goddard Space Flight Center, commented in a statement:

The successful completion of our observatory environmental tests represent a monumental milestone in the march to launch. Environmental testing demonstrates Webb’s ability to survive the rocket ride to space, which is the most violent portion of its trip to orbit approximately a million miles from Earth. The multinational group of individuals responsible for the execution of the acoustic and vibration test is composed of an outstanding and dedicated group of folks who are typical of the entire Webb team.

The testing team is an international consortium of structural dynamics experts who are the lead engineers for each piece of hardware on the observatory. The team members are located throughout the U.S. and Europe, spanning across nine time zones! They are extremely dedicated to support testing at all hours and days to provide their expertise.

Webb will be launched in 2021 from Arianespace’s ELA-3 launch site at European Spaceport located near Kourou, French Guiana. The telescope isn’t quite ready to ship to the launch site yet; it has more tests to undergo, including a full systems evaluation, NASA officials said.

Once it lifts off, though, the massive observatory will make its way to Lagrange Point 2, a gravitationally stable point 930,000 miles (1.5 million km) from our planet. Webb will then deploy its tennis-court-sized sunshield and begin studying the cosmos in infrared light using a mirror that’s 21.3 feet (6.5 m) across, nearly three times wider than the primary mirror on the Hubble.

The James Webb Space Telescope is the largest, most powerful, and complex space telescope ever built. Astronomers intend to use it for a range of research projects, from scanning nearby alien planets for possible signs of life to studying the earliest stars and galaxies of our universe. There are larger Earth-based telescopes than the Webb. But Webb is a space telescope, designed to roam above Earth’s obscuring atmosphere to provide unobstructed views of the heavens. Thaddeus Cesari, a communications specialist for the mission, wrote:

In addition to the groundbreaking science expected from it after launch, Webb has required an improvement in the testing infrastructure and processes involved in validating large complex spacecraft for a life in space … Lessons learned from previous space telescope development were invested into Webb, and future space telescopes will be built upon the same collective knowledge. Thousands of scientists, engineers, and technicians contributed to build, test, and integrate Webb. In total, 258 companies, agencies, and universities participated – 142 from the United States, 104 from 12 European nations, and 12 from Canada. 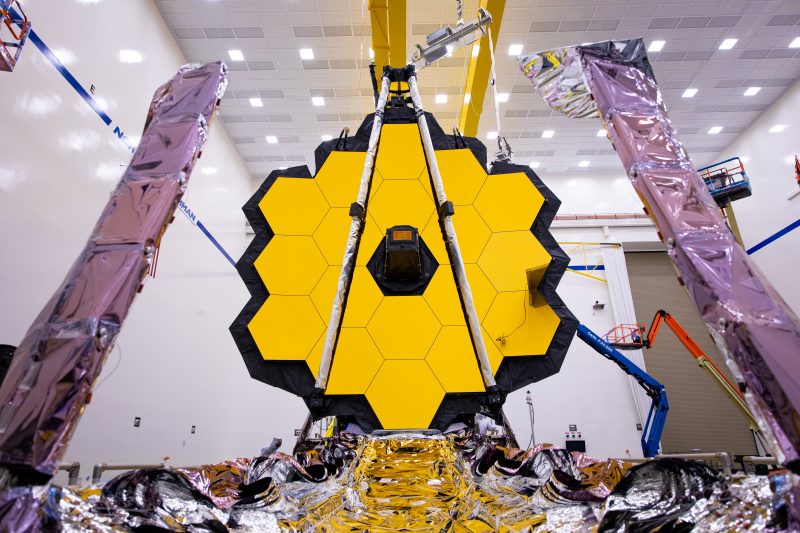 The fully assembled James Webb Space Telescope with its sunshield and unitized pallet structures that will fold up around the telescope for launch. Image via NASA.

All technicians and engineers will continue following personal safety procedures in response to the Covid-19 pandemic, which is causing significant impact and disruption globally, but hasn’t posed a threat to Webb’s final phase of testing prior to launch site shipping. Scott Willoughby, program manager for the Webb, commented:

The path is to deliver the telescope by the end of 2020.

Bottom line: NASA’s James Webb Space Telescope – successor to the Hubble – just took another step toward its highly anticipated 2021 launch, by passing a series of “environmental testing” trials designed to simulate the rigors of launch.