Is there life below the Martian surface? 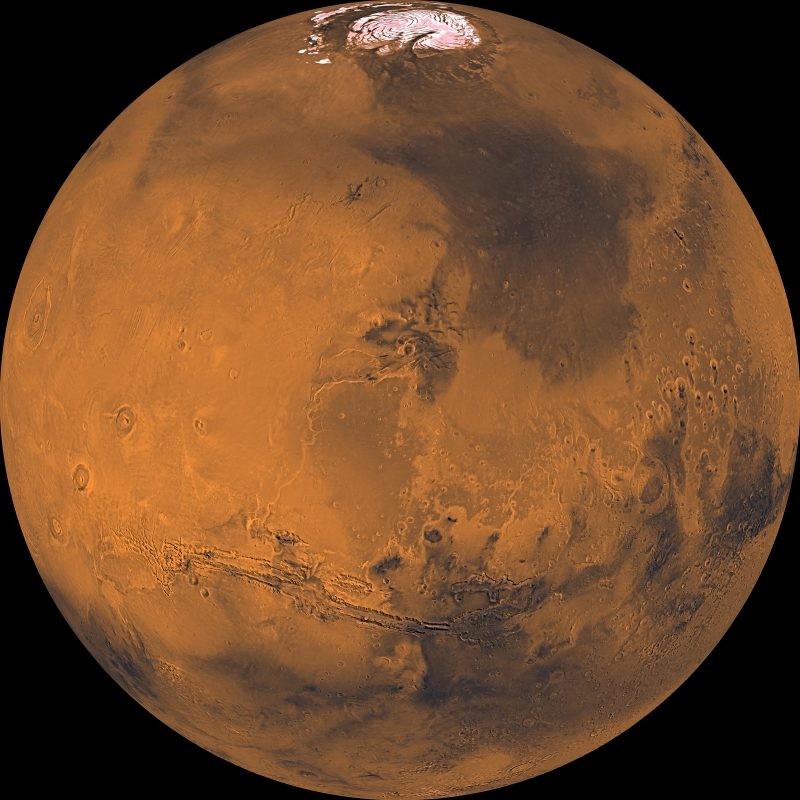 This beautiful composite consists of 1,000 images acquired during the Viking missions to Mars in the late 1970s. Read more about this image.

Galactic cosmic rays that penetrate the Martian surface can potentially trigger the kind of chemical reactions that biological life can harness for metabolism. That’s according to a new study published July 28, 2020 in Scientific Reports, an online peer-reviewed journal published by Nature. Researcher Dimitra Atri – of New York University Abu Dhabi in the United Arab Emirates – is lead author of the new study, which peers (theoretically) below the Martian surface to see how likely it is for life to survive. He said:

It is exciting to contemplate that life could survive in such a harsh environment, as few as 2 meters [6 feet] below the surface of Mars.

Of all the planets in our solar system, Mars is most similar to Earth. Some of the streaks on Mars’ surface may have been caused by running water in the distant past. Volcanoes once exploded there. Even today, the ice caps that sit atop Mars’ poles have some similarities with our own planet’s polar regions. And the seasons change on the red planet in ways reminiscent of earthly seasons. Because it’s so reminiscent of Earth – and because the idea of humans on Mars has long been a dream of both science fiction writers and space engineers – Mars has been the most investigated planet in our solar system. That is particularly true with respect to the search for extraterrestrial life.

But, to date, no one has discovered life on Mars, in any form. The harsh conditions on its surface may prevent life from existing there. But the subsurface of Mars might be a different story. From Dimitra Atri’s new paper:

There is growing evidence suggesting the presence of aqueous environment on ancient Mars, raising the question of the possibility of life in such an environment. Subsequently, with the erosion of the Martian atmosphere resulting in drastic changes in its climate, surface water disappeared, shrinking habitable spaces on the planet, with only a limited amount of water remaining near the surface in form of brines and water-ice deposits. Life, if it ever existed, would have had to adapt to harsh modern conditions, which includes low temperatures and surface pressure, and high radiation dose.

Rovers have been crawling Mars’ surface, and orbiters have been peering down at Mars, for decades. Meanwhile, Mars’ subsurface environment has barely begun to be explored. According to scientists, below its surface, Mars is less harsh and has traces of water in form of water-ice and brines. The new study considers the galactic cosmic rays – high energy particles that emerge from the remnants of violent explosions, such as supernovae – that constantly bombard and penetrate the Martian surface. The study suggests that galactic cosmic rays might serve as energy to trigger the kind of reactions that lead to organic chemicals, the sorts of chemicals upon which all life is based.

Traveling at nearly the speed of light, galactic cosmic rays enter our solar system from outer space. They’re able to penetrate a few meters below the Martian surface. This radiation might make this region hospitable for potential life to evolve, Atri suggests.

Scientists believe that Mars was once warmer and more suitable to life than it is now. Could life (if it ever existed) have survived the planet’s subsequent climate change? From the paper:

… if life did exist on ancient Mars, there is a possibility of survival, which can be estimated based on our knowledge of extremophiles that are known to survive in comparably harsh environments on Earth. Such microbial life could have either originated on Mars, or been transported from elsewhere, including from the Earth.

This possibility of Martian subsurface life will be explored for the first time in 2022 by the Rosalind Franklin rover, which is part of the European Space Agency’s and Roscosmos’ ExoMars mission. Like so many Mars missions before it, the rover’s goal will be to establish whether life currently exists or has ever existed on the red planet. From the website:

Determining whether life ever existed on the red planet, or still does today, is at the heart of the ExoMars program. While spacecraft exploring Mars in the last decades have shown that the surface is dry and barren, billions of years ago it was much more reminiscent of Earth, with water flowing in rivers and lakes, perhaps seas. If life ever began in this very early period, scientists think that the best chances to find evidence for it is to look underground, in ancient regions of Mars that were once influenced by water.

To do this, the rover is equipped with a drill that can collect samples up to two meters (about six feet) below Mars’ surface.

The Rosalind Franklin rover is scheduled to be launched in 2022.

Bottom line: A new study theorizes that galactic cosmic rays might serve as energy that can be harnessed by subsurface Martian life for metabolism. This possibility will be explored in depth by the Rosalind Franklin rover which will be launched in 2022.