Is there a black hole in the center of our galaxy?

And if the Milky Way does have a central black hole, what’s it doing there?

We live on a planet – orbiting a star – one among billions of stars in our Milky Way galaxy. The center of the Milky Way is about 25,000 light-years away, in the direction of the constellation Sagittarius. 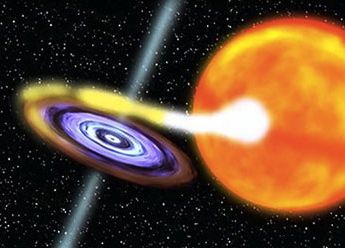 Artist’s concept of black hole and companion star via NASA

We can’t see the exact center of our galaxy with the eye alone. Dust hides it from view. But astronomers do use other forms of electromagnetic radiation – including infrared and radio waves – to probe our galaxy’s core. They’ve learned that strange things are happening there.

For decades, astronomers have detected a faint emission of radio waves from the center of the galaxy. They call this central radio source Sagittarius A* (Sagittarius A* is pronounced “Sagittarius A-Star,” by the way.) The region emitting the radio waves is small. It would nearly fit between our Earth and sun.

More recently, astronomers learned that about a dozen stars appear to be orbiting this central region of the Milky Way. At least one star moves in orbit almost unbelievably fast – at a speed of about 3,000 miles per second. In contrast, our sun moves around the galaxy’s center at about 140 miles per second. 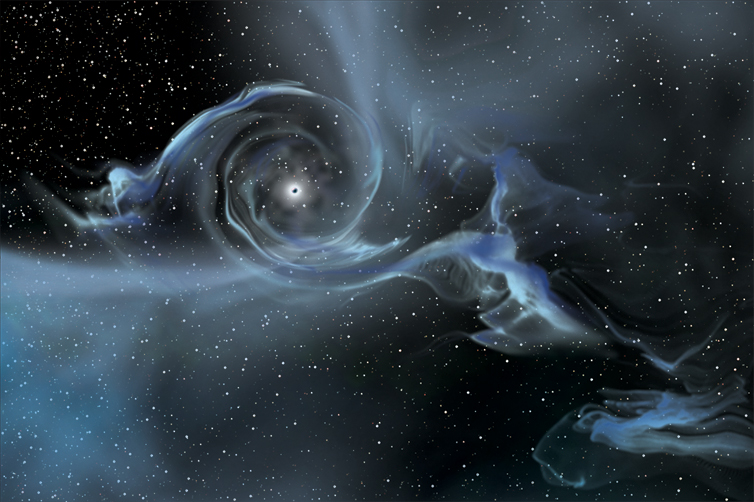 And this central region of our galaxy is very still. It’s barely moving at all. If it were an ordinary object, the gravity of nearby objects would pull on it – and it would be experiencing some motion.

For all of these reasons and more, astronomers suspect there’s a black hole in the center of our galaxy. In other words, there might be a lot of mass squeezed into a small space. But this is no ordinary black hole. The black hole at the heart of our galaxy is extremely massive – at least four million times more massive than our sun.

There’s nothing special about our galaxy. It’s one of billions of galaxies in the universe.
And astronomers have come to believe that there are black holes in the centers of most – if not all – galaxies.

This video shows how NASA’s Swift satellite made the discovery of a new black hole in our Milky Way, one of only about a dozen known.