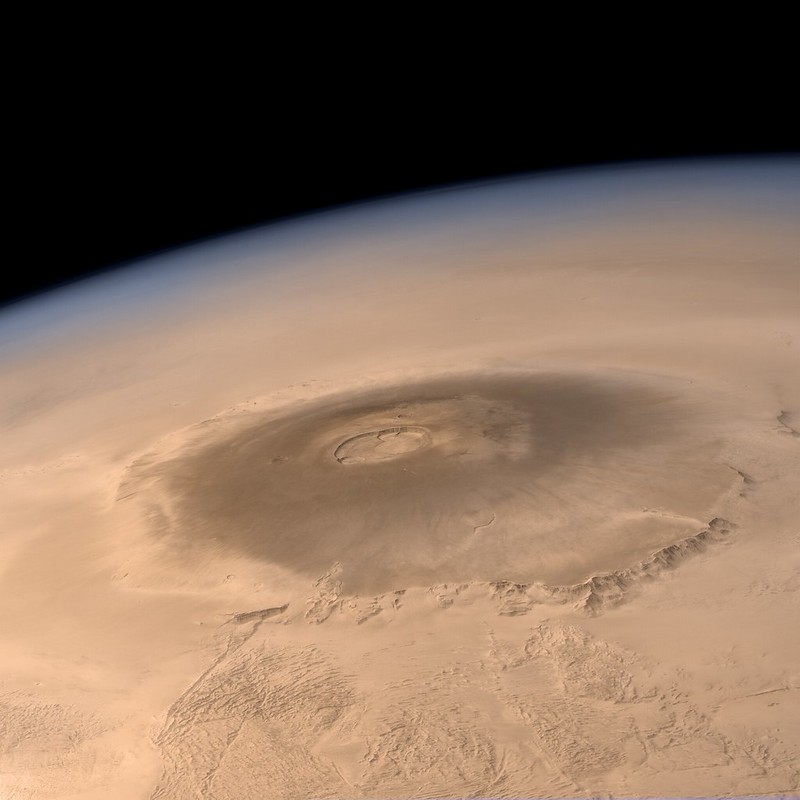 Is Mars still volcanically active? At first glance, it wouldn’t seem to be, since no eruptions have ever been observed from any of the numerous volcanoes dotting its desert surface. Recent findings from NASA’s InSight lander have shown that there’s still at least some residual geologic activity underground, however, in the form of marsquakes. Now, a newly announced study of a Martian meteorite has provided the first evidence of what scientists call magma convection on Mars – a rising and falling of currents in molten material beneath Mars’ surface – that took place in the planet’s mantle a few hundred million years ago. Perhaps this slow roiling of magma beneath Mars’ crust still occurs today.

The new peer-reviewed findings were published in Meteoritics & Planetary Science on May 7, 2020.

The intriguing results – reported in ScienceAlert by Michelle Star on May 11, 2020 – come from a new study of the Tissint Martian meteorite. A Martian meteorite is a rock ejected from Mars, likely via an impact event, which traversed interplanetary space and ultimately landed on Earth. Found in Morocco on July 18, 2011, the Tissint meteorite originated from deep within Mars. Tissint has been the subject of much study already, but this time, the researchers found something surprising. The meteorite contained crystals of olivine, rock-forming minerals commonly found in Earth’s crust.

When those crystals were examined more closely, it was found that they could have only formed in changing temperatures within currents of magma convection. 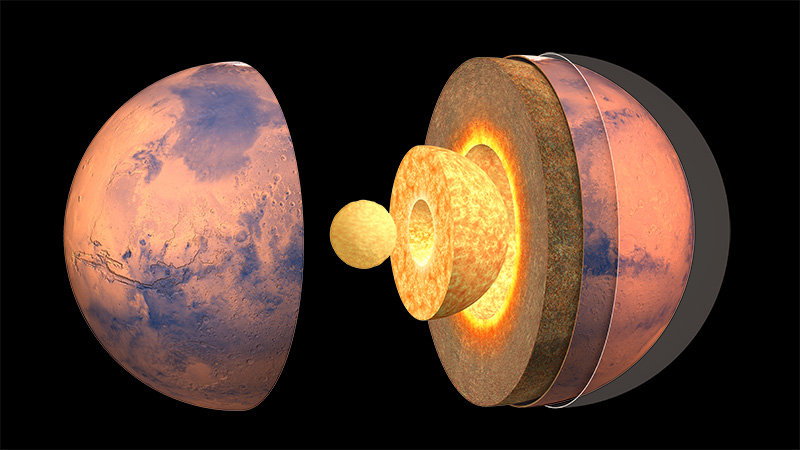 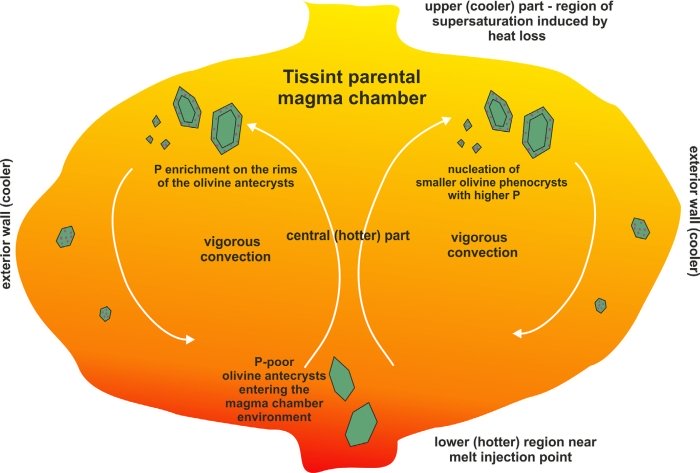 Diagram of a possible magma chamber on ancient Mars. The Tissint meteorite may have originated from a place like this, beneath Mars’ surface. Image via Mari et al./ Meteoritics & Planetary Science, 2020/ ScienceAlert.

The crystals are an estimated 674 to 582 million years old, fairly young geologically speaking, so the implication is that Mars was still volcanically active at that time. Planetary geologist Nicola Mari of the University of Glasgow told ScienceAlert:

There was no previous evidence of convection on Mars, but the question ‘Is Mars a still volcanically active planet?’ was previously investigated using different methods. However, this is the first study that proves activity in the Mars interior from a purely chemical point of view, on real Martian samples.

The olivine crystals would have formed inside a magma chamber deep underground. Olivine is common in Earth’s mantle, and even in meteorites. But the researchers noticed something odd about the olivine crystals in Tissint. They had irregularly-spaced bands composed of phosphorus. It’s a known process on Earth, called solute trapping, where, during rapid solidification, solute (the substance dissolved in a solution) may be incorporated into the solid phase at a concentration significantly different from that predicted by equilibrium thermodynamics. 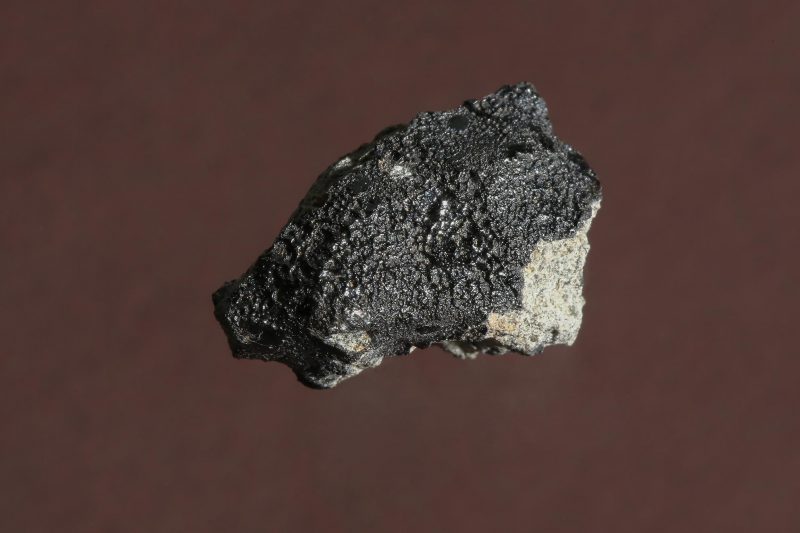 This occurs when the rate of crystal growth exceeds the rate at which phosphorus can diffuse through the melt, thus the phosphorus is obliged to enter the crystal structure instead of ‘swimming’ in the liquid magma. In the magma chamber that generated the lava that I studied, the convection was so vigorous that the olivines were moved from the bottom of the chamber (hotter) to the top (cooler) very rapidly, to be precise, this likely generated cooling rates of 15-30 degrees Celsius per hour [about 27-55 degrees Fahrenheit] for the olivines.

The Tissint martian meteorite is an unusual depleted olivine-phyric shergottite, reportedly sourced from a mantle-derived melt within a deep magma chamber. Here, we report major and trace element data for Tissint olivine and pyroxene, and use these data to provide new insights into the dynamics of the Tissint magma chamber. The presence of irregularly spaced oscillatory phosphorous (P)-rich bands in olivine, along with geochemical evidence indicative of a closed magmatic system, implies that the olivine grains were subject to solute trapping caused by vigorous crystal convection within the Tissint magma chamber. Calculated equilibration temperatures for the earliest crystallizing (antecrystic) olivine cores suggest a Tissint magma source temperature of 1680 degrees Celsius [3056 degrees Fahrenheit], and a local martian mantle temperature of 1560 degrees Celsius [2840 degrees F] during the Late Amazonian, the latter being consistent with the ambient mantle temperature of Archean Earth.

How do the researchers know the meteorite came originally from deep under Mars’ crust? The larger olivine crystals contained traces of nickel and cobalt. This, along with previous evidence, shows that the meteorite must have once been part of rock 25 to 50 miles (40 to 80 kilometers) beneath the surface. 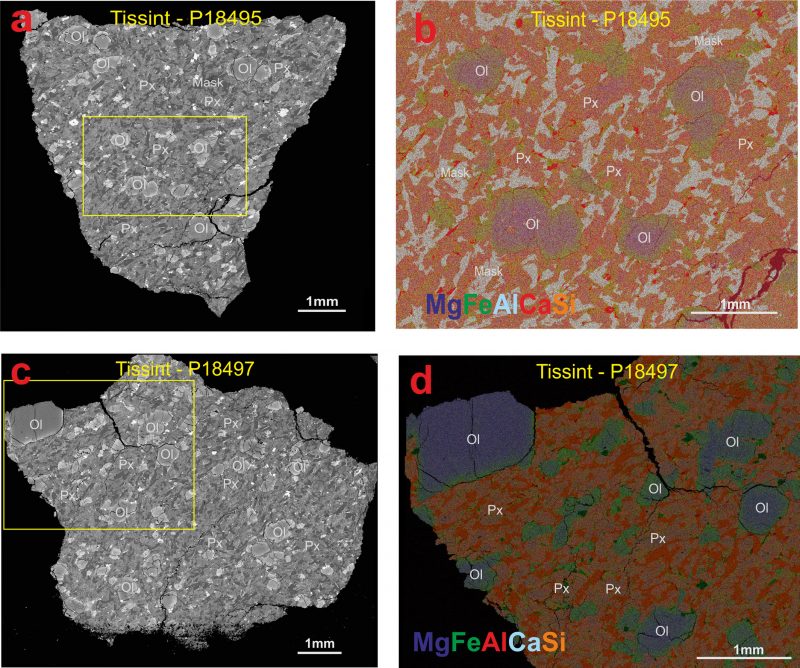 With all of this data, the researchers could estimate the temperatures in the Martian mantle at the time when the crystals first formed. They came up with 1,560 degrees Celsius (2840 degrees F) during the Martian Late Amazonian period. That’s a lot hotter than had been previously thought, almost as hot as 1,650 degrees Celsius (3002 F) during the Archean Eon on Earth, 4 to 2.5 billion years ago. This is recent enough, geologically, to suggest that Mars may still have active magma convection even today. Mari said:

I really think that Mars could be a still volcanically active world today, and these new results point toward this. We may not see a volcanic eruption on Mars for the next 5 million years, but this doesn’t mean that the planet is inactive. It could just mean that the timing between eruptions between Mars and Earth is different, and instead of seeing one or more eruptions per day (as on Earth) we could see a Martian eruption every n-millions of years.

So Mars may still be volcanically active today – as in recent geological time – but eruptions are spaced far apart, by a few million years, according to the researchers. It would be amazing to see a volcanic eruption on Mars, since the planet’s largest volcanoes are much larger than ones on Earth. Olympus Mons, the biggest of them all, is taller than Mount Everest! 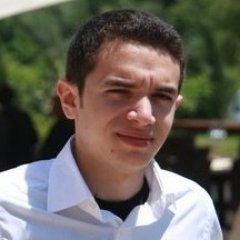 Nicola Mari of the University of Glasgow, lead author of the new study. Image via Twitter.

In 2014, it was reported that the Tissint meteorite might contain traces of ancient microbial activity. According to Philippe Gillet, director of École Polytechnique de Lausanne (EPFL, Switzerland) Earth and Planetary Sciences Laboratory:

Insisting on certainty is unwise, particularly on such a sensitive topic. I’m completely open to the possibility that other studies might contradict our findings. However, our conclusions are such that they will rekindle the debate as to the possible existence of biological activity on Mars – at least in the past. So far, there is no other theory that we find more compelling.

While the jury is still out on the possible life traces, Tissint has shown, at the very least, that Mars was once much more active geologically than it is now.

Bottom line: A new study of an ancient Martian meteorite suggests that Mars was more volcanically active a few hundred million years ago than previously thought, and may even still be active today.