New research suggests that volcanoes of molten iron might have erupted onto the surface of metallic asteroids. 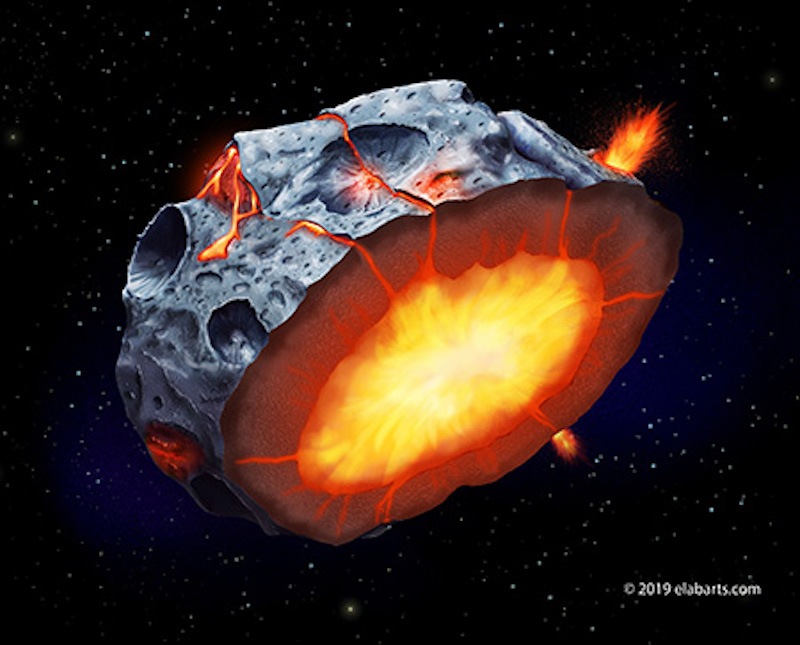 As a metallic asteroid cooled and solidified, iron volcanoes may have erupted onto its surface. image via Elena Hartley/UC Santa Cruz.

Asteroids tend to be either rocky or metallic. This week, scientists said they think metallic – or M-type – asteroids started out as blobs of molten iron floating in space. A new study says that, as the metal cooled and solidified, volcanoes of molten iron might have erupted through the asteroids’ solid iron crust. The study was published April 8, 2019, in the peer-reviewed journal Geophysical Research Letters. It was prompted in part by NASA’s upcoming mission to asteroid Psyche, which is the largest metallic asteroid in the solar system.

Although metallic asteroids have been detected in the asteroid belt orbiting the sun between Mars and Jupiter, astronomers say their understanding of these asteroids’ surfaces is “limited.” The first detailed images will come from the Psyche spacecraft, scheduled to launch in 2022 and reach the asteroid four years later. The researchers said the mission could look for signs of past eruptions – evidence of what they call ferrovolcanism (ferro means containing iron) – such as variations in the color or composition of material on the surface, and possibly features that look like volcanic vents. These scientists said they aren’t sure what iron volcanoes on metal asteroids would look like. Large volcanic cones, like we see here on Earth, are probably unlikely, said the researchers. Because metallic asteroids would have solidified fairly quickly after their formation, there have been billions of years for any surface features of volcanism to be degraded.

The scientists also said evidence for ferrovolcanism might turn up in the study of iron meteorites in collections here on Earth. Francis Nimmo, a planetary scientist at University of California Santa Cruz, is the new study’s lead author. He commented:

There are lots of these metallic meteorites, and now that we know what we’re looking for, we might find evidence of volcanism in them. If material got erupted onto the surface, it would cool very fast, which would be reflected in the composition of the meteorite. And it might have holes in it left by escaping gas.

Animation of spacecraft flying around asteroid Psyche. Via NASA.

Nimmo said he was interested in the composition of metallic asteroids when he asked graduate student Jacob Abrahams to work on some simple models of how the asteroids cooled and solidified. Nimmo said in a statement:

One day he turned to me and said, ‘I think these things are going to erupt.’ I’d never thought about it before, but it makes sense because you have a buoyant liquid beneath a dense crust, so the liquid wants to come up to the top.

Researchers believe that metallic asteroids originated early in the history of our solar system when newly-forming protoplanets collided and were stripped of their rocky outer layers, leaving just the molten, iron-rich core. In the cold of space, this blob of liquid metal would quickly begin to cool and solidify. Nimmo explained:

Bottom line: Volcanoes spewing molten iron might have erupted onto the surface of asteroids known as metallic asteroids, according to a new study.

Via University of California Santa Cruz