Did an interstellar traveler hit Earth in 2014?

‘Oumuamua – 1st known object to sweep past us from beyond our solar system – caused a stir when astronomers spotted it in 2017. Now a new study suggests another interstellar object might have hit the Earth in 2014. 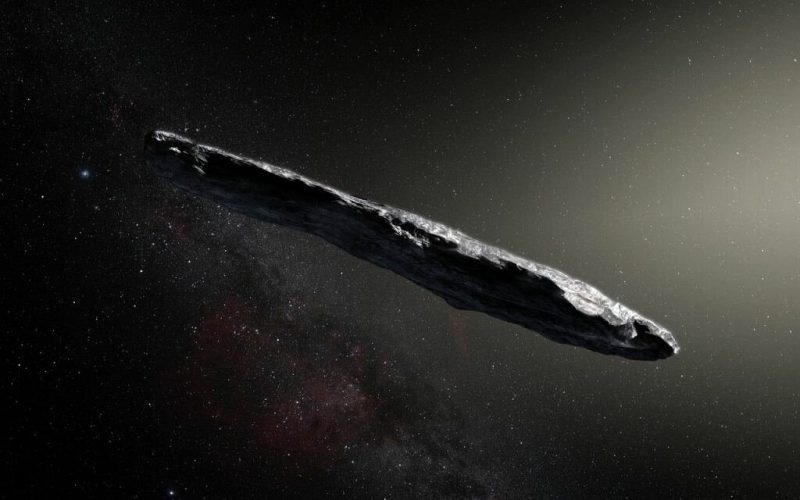 Artist’s concept of ‘Oumuamua, the first known interstellar visitor, which was discovered in 2018. Did a similar, but much smaller, object hit the Earth in 2014? Image via K. Meech et al./ESO.

‘Oumuamua – that weird and never-before-seen object from very deep space – made headlines a year ago when it journeyed into our solar system from some unknown origin elsewhere in our galaxy. Whatever it was, a comet, asteroid or even – as at least one scientist dared to suggest – an artificial probe or relic of some kind – it was the first known observation of an interstellar visitor entering our solar system from beyond.

Now, a new study suggests that Earth might have encountered a similar interstellar visitor, although a much smaller one, back in 2014. In this case, however, the object not only ventured into our solar system, it actually hit Earth’s atmosphere and became a fiery meteor in our skies. The peer-reviewed findings were published in Astrophysical Journal Letters on April 15, 2019, by researchers Amir Siraj and Abraham Loeb at Harvard University. Loeb is the astronomer who stated that there was a chance that ‘Oumuamua could be an artificial object – an idea that received much criticism by most other astronomers at the time (although the concept made a heck of a sci-fi story, which Arthur C. Clarke wrote and first published in 1973 as “Rendezvous with Rama“).

Loeb and Siraj found the data regarding the previously unknown object from 2014 while searching the database form the Center for Near Earth Object Studies. They were looking for objects that traveled “faster than normal,” like ‘Oumuamua, an indication that they may have originated from outside the solar system. They searched 30 years of data, and found three possible contenders, but two of those were rejected due to incomplete data. The orbit of one of them suggested it was gravitationally bound to the sun, while the second was more uncertain. The third object was different, however; this meteor was recorded on January 8, 2014, near Papua New Guinea. It apparently disintegrated in the atmosphere at a height of 11.6 miles (18.7 km), traveling at an incredible speed of 134,200 miles/hour (216,000 km/hour).

If the researchers are correct, a small interstellar object hit the Earth’s atmosphere as a meteor on January 8, 2014, as in this artist’s concept. Image via forplayday/iStock.

At that velocity, Loeb and Siraj calculated that it most likely came from beyond the solar system, just like ‘Oumuamua. This object, though, was much smaller than ‘Oumuamua, only about 3 feet (0.9 meters) wide. ‘Oumuamua, by comparison, was estimated to be 1,300 feet (400 meters) long. Such tiny objects as the 2014 one, as meteors, can be easy to miss, but as Loeb suggested in Space.com, scientists can use Earth’s atmosphere to find them:

We can use the atmosphere of Earth as the detector for these meteors, which are too small to otherwise see.

The speed also indicates that the object may have experienced a gravitational boost during its journey and that it most likely came from another planetary system, reasonably close to its star. This brought up another interesting possibility – a chance that the object could have originated from the habitable zone of the star, where temperatures could allow liquid water on the surface of any rocky planets. At this point, however, we still don’t even know which star it came from, so this is still all speculation. As Siraj told Newsweek, there should be a larger number of objects smaller than ‘Oumuamua that enter our solar system and even hit Earth’s atmosphere on occasion: 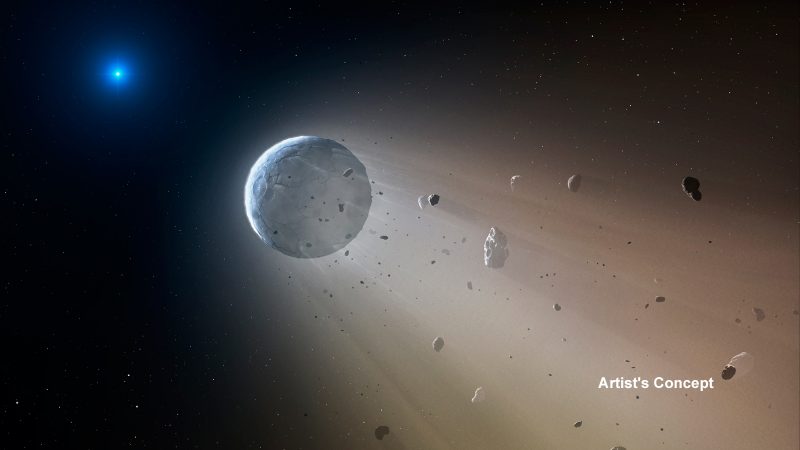 Artist’s concept. There is a chance that the rocky object that hit Earth’s atmosphere in 2014 originated from close to a star in another planetary system, such as the debris depicted here from a planet being torn apart by a white dwarf star. Image via CfA/Mark A. Garlick.

But how often might this ejection of rocky debris from planetary systems actually happen? Using Earth as an example, with three interstellar meteors every 30 years or so, the researchers estimated that there may be a million similar objects for every cubic astronomical unit (AU) in our galaxy. One astronomical unit is the average distance between the Earth and the sun — about 93 million miles (150 million km). If so, then each nearby star could eject 60 billion trillion such rocks from its planetary system. That’s equal to about 0.2 to 20 times the mass of Earth. Or as Loeb put it:

Roughly the number of stars in the observable universe.

It’s amazing to think that so much rocky debris could be spread between planetary systems, given the enormous distances between stars. But if Loeb and Siraj are right, then it may actually be fairly common. ‘Oumuamua may have been a similar object, just larger.

This scenario also brings to mind the well-known theory of panspermia, where microbial life could be delivered between different planetary systems via rocky debris like asteroids or comets. If it can be proven that small rocky objects like these can indeed travel between planetary systems, that would increase the chances of panspermia actually occurring, “seeding” the galaxy with life as it were, even if perhaps only rarely. If the debris hit a planet with suitable conditions, then those microbes may find a happy new home. As the researchers noted:

Spectroscopy of gaseous debris from these objects as they burn up in the Earth’s atmosphere would reveal their composition… Potentially, interstellar meteors could deliver life from another planetary system and mediate panspermia. 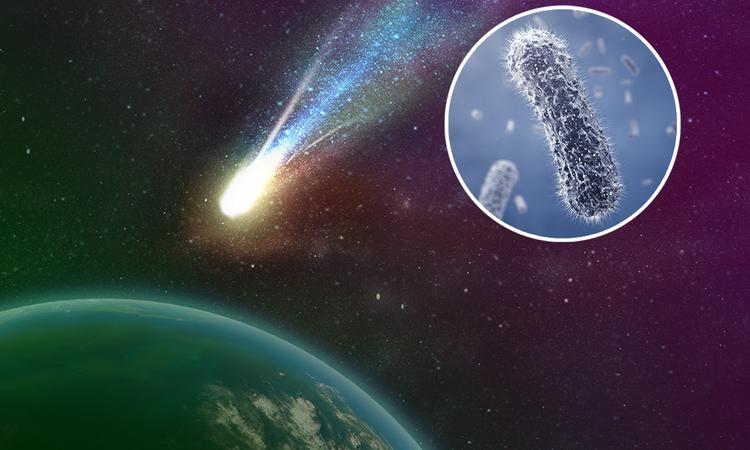 Artist’s concept of a meteor encountering a planet. If, as this new study suggests, rocky debris traveling between planetary systems is common, that may increase the likelihood that panspermia could actually occur. Image via Curiosity.

A previous study, using data from the Large Synoptic Survey Telescope (LSST), had found four possible candidates as well. Loeb says that many more such objects could be found in our solar system in the near future:

In the future, many more interstellar objects are likely to be discovered by LSST. Another telescope with the potential to discover sun-grazing comets is the forthcoming Daniel K. Inouye Solar Telescope (DKIST), which is located just next to the Pan-STARRS observatory on Mount Haleakala in Hawaii. DKIST will observe the sun at high spatial and temporal resolution, and is equipped with multiple spectro-polarimeters. DKIST’s capabilities of studying sun-grazing comets may be limited by its lack of a coronograph to block the sunlight, but its unprecedented sensitivity and resolution may yield interesting discoveries.

If so, what began with the solitary fascinating discovery of ‘Oumuamua may be just the beginning of many more to come.

Bottom line: If this new study is right, then interstellar space rocks similar to ‘Oumuamua coming into our solar system may be surprisingly common.

Source: Discovery of a Meteor of Interstellar Origin