Scientists working with data from NASA’s Cassini mission – now in its sixth year of operations at Saturn – have discovered an electrical current running between Saturn and its moon Enceladus that creates an observable emission on the ringed planet. A paper describing the research appears in the April 21 issue of Nature. Don Mitchell, Cassini science team co-investigator from the Johns Hopkins University Applied Physics Laboratory (APL) in Laurel, Maryland, first observed the current connection as a strong “bull’s-eye” emission in the middle of images snapped by the APL-built ion and neutral camera (INCA) on Cassini. Mitchell, a co-author of the paper, said:

The ion beam seen by the camera appears at exceptionally high energy, between about 30,000 and 80,000 electron volts, surprising for an interaction with such a small moon. 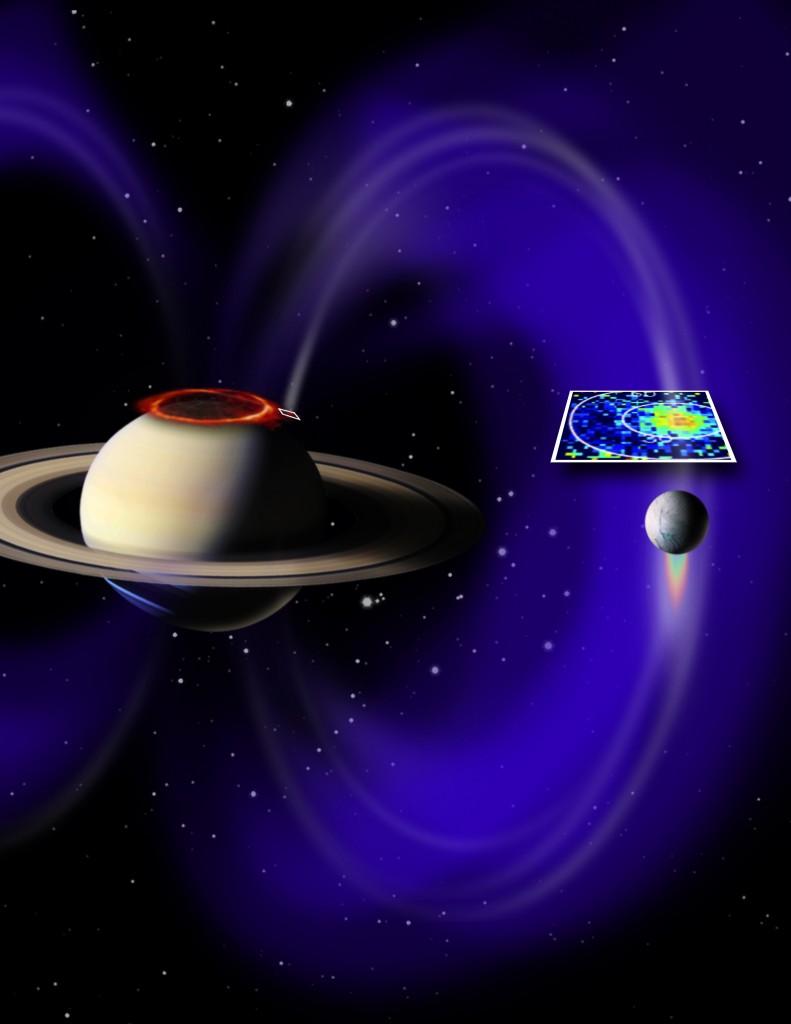 Accurately identifying the magnetospheric location of a source of auroral emission is very exciting. At Jupiter, the identification of the satellite footprints in the auroral region allowed scientists to connect the polar region with the equatorial one magnetically. This paper will give us a great reference point for future studies of Saturn’s aurora.

The ion beam set the stage for APL’s Abigail Rymer, a lead author of the study and a Cassini team scientist, to find evidence of a very strong co-aligned electron beam in Cassini plasma spectrometer data. She said:

I immediately pulled up the electron data and, sure enough, there was a very strong electron beam propagating away from Saturn toward Enceladus. It was actually a fairly rare opportunity to capture that, since when Cassini flies close to a moon we are generally looking at the moon – not away from it.

The electrons Rymer discovered were of sufficient energy that they could stimulate an observable auroral output on the planet, a glowing spot formed the same way as the Earth’s northern lights — with electrons precipitating into the ionosphere. At Earth, however, the electrons come from interplanetary space; at Saturn they represent an enormous current system looping through Enceladus all the way back to Saturn, more than 150,000 miles away. 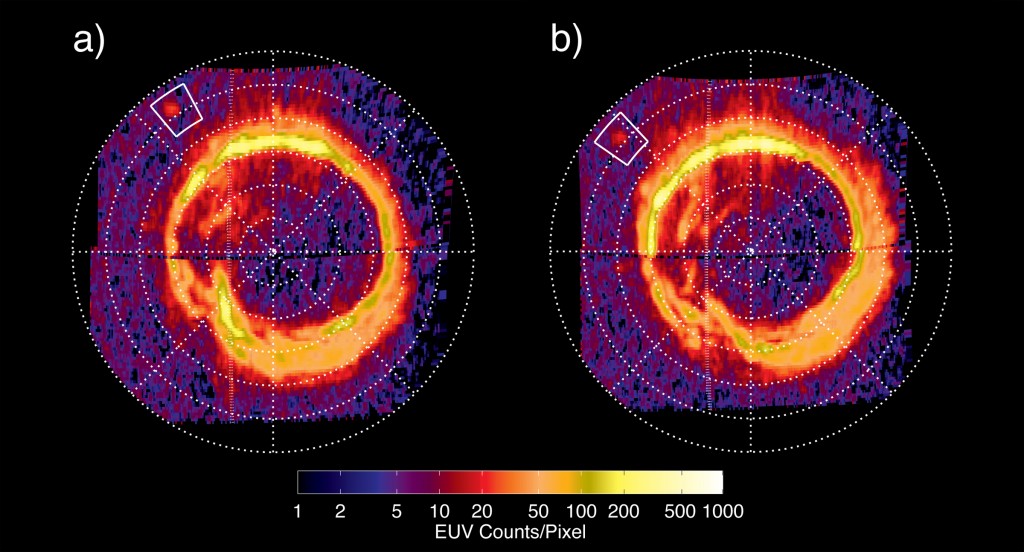 We searched for an auroral footprint on Saturn by using Cassini’s ultraviolet spectrograph to make images. It turns out that ultraviolet light from the Enceladus footprint is not always visible; in fact, of 282 images that could include the signal, only seven provide convincing evidence for a bright spot.

That the footprint appears to “flicker” suggests variable outgassing from Enceladus, Rymer says, but the Cassini team is not yet convinced the plume activity on Enceladus is variable. Rymer said:

Scientists have been wondering whether the venting rate is variable and these new data suggest that it is.

Bottom line: Scientists Abigail Rhymer, Don Mitchell and other team members at Johns Hopkins University Applied Physics Laboratory, working with data from NASA’s Cassini mission, have discovered a powerful electrical current running between Saturn and its moon Enceladus. A paper describing the research appears in the April 21 issue of Nature.

An amazing picture of Enceladus the frozen moon