IAU approves 2nd round of names for Pluto features

New Horizons provided close-up images of Pluto in 2015. For many on Earth today, these spacecraft images provide a once-in-a-lifetime glimpse of Pluto. Read about the new Pluto feature names. 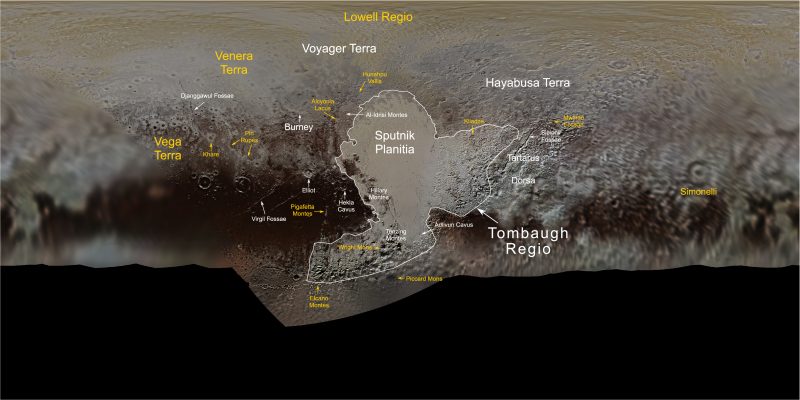 View larger. | This map, compiled from images and data gathered by NASA’s New Horizons spacecraft during its flight through the Pluto system in 2015, contains Pluto feature names approved by the International Astronomical Union. Names from the newest round of nominations, approved in 2019, are in yellow. Image via NASA/JHUAPL/Southwest Research Institute/Ross Beyer.

NASA’s New Horizons team – which sent the New Horizons spacecraft sweeping past Pluto and its moons in 2015 – said on August 8, 2019, that the International Astronomical Union (IAU) has now formally approved a list of new names for features on this outer world. The IAU has claimed for itself the authority to name planets, dwarf planets, moons, asteroids and planetary features in our solar system since its inaugural meeting in Rome in 1922. It named the new features on Pluto for people and missions who, it said, “paved the way” for New Horizons’ visit. The new names describe regions, mountain ranges, plains, valleys and craters seen for the first time by human eyes thanks to New Horizons. Missions like New Horizons take decades to propose, plan and carry out, and no new Pluto mission is in the offing. For many alive today, the New Horizons’ mission has provided our only close-up glimpse of Pluto and its moons.

This is the second set of Pluto feature names; the IAU approved the first set of 14 feature names for Pluto in 2017, as well as a set of names for Pluto’s largest moon, Charon, in 2018. The team gathered many of the naming ideas during an online campaign in 2015. I didn’t follow the new naming process closely, but, I have to admit, I’m saddened there are no women mentioned among these new names. Not even one? The 14 newest Pluto feature names are listed alphabetically below. The scientists’ statement said:

The names pay homage to underworld mythology, pioneering space missions that led to the capability to conduct New Horizons, historic pioneers who crossed new horizons in the exploration of Earth, and scientists and engineers associated with the study and exploration of Pluto and the Kuiper Belt. 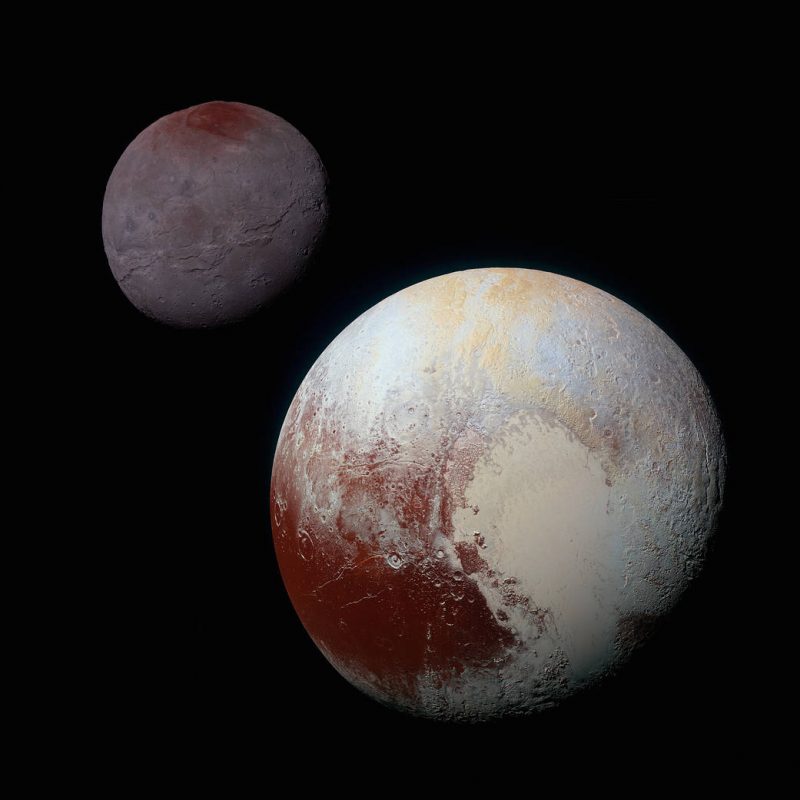 This composite image of Pluto (lower right) and Charon (upper left) is made of enhanced-color images acquired by New Horizons as it passed through the Pluto system in 2015. The color and brightness of both Pluto and Charon have been processed identically to allow direct comparison of their surface properties, and to highlight the similarity between Charon’s polar red terrain and Pluto’s equatorial red terrain. Pluto and Charon are shown with approximately correct relative sizes, but their true separation is not to scale. Image via NASA.

Alcyonia Lacus, a possible frozen nitrogen lake on Pluto’s surface, is named for the bottomless lake in or in the vicinity of Lerna, a region of Greece known for springs and swamps; the Alcyonian lake was one of the entrances to the underworld in Greek mythology.

Elcano Montes is a mountain range honoring Juan Sebastián Elcano (1476-1526), the Spanish explorer who in 1522 completed the first circumnavigation of the Earth (a voyage started in 1519 by Magellan).

Hunahpu Valles is a system of canyons named for one of the Hero Twins in Mayan mythology, who defeated the lords of the underworld in a ball game.

Khare crater honors planetary scientist Bishun Khare (1933-2013), an expert on the chemistry of planetary atmospheres who did laboratory work leading to several seminal papers on tholins — the organic molecules that probably account for the darkest and reddest regions on Pluto.

Lowell Regio is a large region honoring Percival Lowell (1855-1916), the American astronomer who founded Lowell Observatory and organized a systematic search for a planet beyond Neptune.

Mwindo Fossae is a network of long, narrow depressions named for the Nyanga (Eastern Dem. Rep. Congo/Zaire) epic hero who traveled to the underworld and after returning home became a wise and powerful king.

Piccard Mons is a mountain and suspected cryovolcano that honors Auguste Piccard (1884-1962), a 20th century inventor and physicist best known for his pioneering balloon flights into Earth’s upper atmosphere.

Pigafetta Montes honors Antonio Pigafetta (c. 1491-c. 1531), the Italian scholar and explorer who chronicled the discoveries made during the first circumnavigation of the Earth, aboard Magellan’s ships.

Piri Rupes is a long cliff honoring Ahmed Muhiddin Piri (c. 1470-1553), also known as Piri Reis, an Ottoman navigator and cartographer known for his world map. He also drew some of the earliest existing maps of North and Central America.

Vega Terra is a large land mass named for the Soviet Vega 1 and 2 missions, the first spacecraft to fly balloons on another planet (Venus) and to image the nucleus of a comet (1P/Halley).

Venera Terra is named for the Venera missions sent to Venus by the Soviet Union from 1961 to 1984; they included the first human-made device to enter the atmosphere of another planet, to make a soft landing on another planet and to return images from another planetary surface.

According to the statement:

The New Horizons spacecraft – built and operated at the Johns Hopkins Applied Physics Laboratory in Laurel, Maryland, with a payload and science investigation led by Southwest Research Institute – is nearly 4.1 billion miles (6.6 billion km) from Earth. The spacecraft is in good health and is currently transmitting data recorded from its New Year’s 2019 encounter with the Kuiper Belt object 2014 MU69, the farthest and most primitive object ever explored.

View larger. | Computer-generated image showing New Horizons’ location in our solar system on August 10, 2019. The green line shows where New Horizons has traveled since launch; the red indicates its future path. This perspective is from above the sun and “north” of Earth’s orbit. To update, visit JHUAPl’s page Where Is New Horizons?

Bottom line: The pioneering New Horizons spacecraft photographed Pluto as it swept past in 2015. The new feature names recognize giants in Earth and space mythology and history, upon whose shoulders the New Horizon mission stands.