NASA aims to have humans on Mars by the 2030s. The people making the long space journey will experience health risks they’ve never faced before. 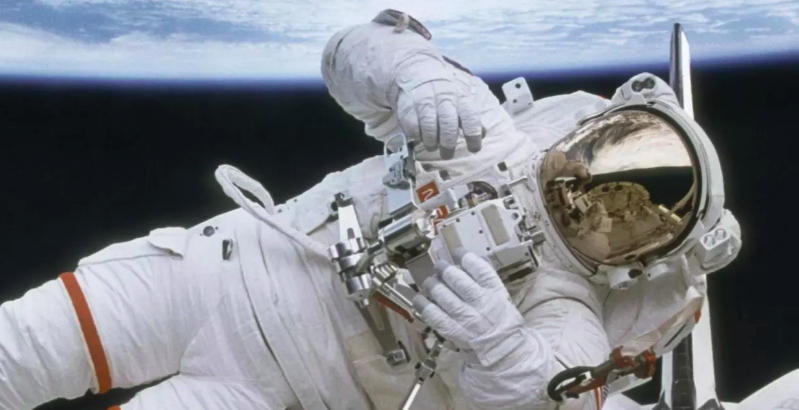 International Space Station astronauts have been helping to pave the wave for future manned Mars missions. Image via NASA.

NASA has announced its aim to have humans on planet Mars by the 2030s. But long-distance space travel brings with it a unique set of health problems.

How will the people who make the trip cope with the mental and physical rigors of the journey? Marc Jurblum, a training psychiatrist at the University of Melbourne and member of the Australasian Society of Aerospace Medicine’s Space Life Sciences Committee, outlined six of the key health issues facing prospective space travelers.

NASA astronaut Scott Kelly watches carrots float in front of him on April 19, 2015 in space. Kelly was one of the One-Year crew members on the International Space Station testing how the human body reacts to an extended presence in space as preparation for the long flights NASA plans to Mars and back in the future. Image via NASA/Futurity.org.

On Earth, tiny gyroscopes in your brain give you spatial awareness. They tell you when you tilt your head, accelerate, or change position. But it’s different in space. Jurblum said:

In Zero G, those don’t work as well and, as a result, astronauts suffer a lot of nausea. A lot of them spend days feeling incredibly unwell. It’s like being seasick.

There are many examples. In 1968, NASA launched Apollo 8. Astronaut Frank Borman suffered such a bad bout of space sickness on the way to the moon that Mission Control considered shortening the mission.

Fortunately, just like people going to sea eventually get their sea legs, astronauts develop ‘space legs’ within about two weeks. But once they return to Earth, the opposite is true — many of them have to work hard to get their ‘Earth legs’ back. 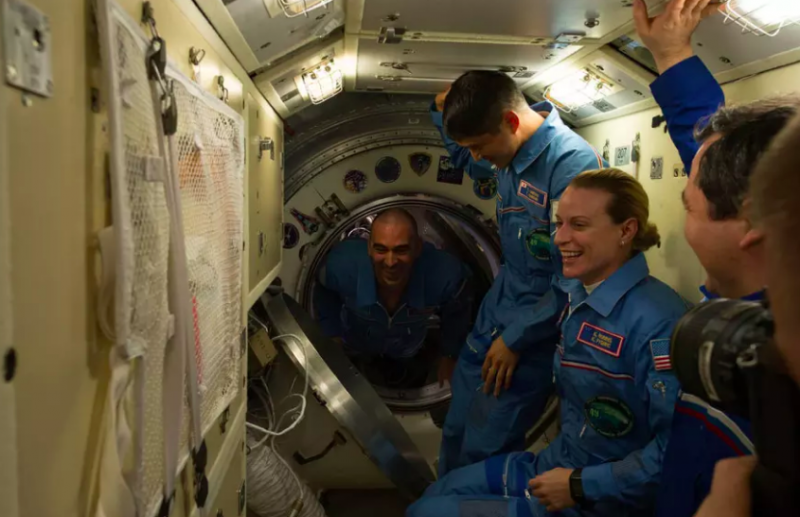 Expedition 48 crew members on board the International Space Station adjusting to cramped station life in orbit. Image via NASA.

Space travel is still inherently dangerous. Essentially you are floating through an airless vacuum in a sealed-up container, only staying alive because of the machinery recycling your air and water. There is little room to move and you’re in constant danger from radiation and micro-meteorites. Jurblum said:

We don’t know what months and months of living in an unchanging capsule habitat with only blackness outside the little window will do to people’s minds. Even if you turn the ship around, Earth will be a distant speck of light. There’s little more than hydrogen atoms for hundreds of thousands of kilometers around you.

Research groups are looking at how to maintain mental health in extreme environments, including using interventions such as meditation and the positive impact pictures of nature can have on space travelers. Virtual Reality might also help by giving the astronauts a rest from the monotony.

Then there’s the issue of emotions. On Earth, if people get upset with their boss or workmate they might take out their frustrations at home or the gym. In space, astronauts can’t afford to get angry with each other. They must be able to react really quickly, communicate, and work as a team.

Most astronauts who have gone into space have come back with a change of perspective. They become more environmentalist, spiritual, or religious.

…the realization that we are all traveling together on the planet and that if we all looked at the world from that perspective we would see that nothing is impossible. 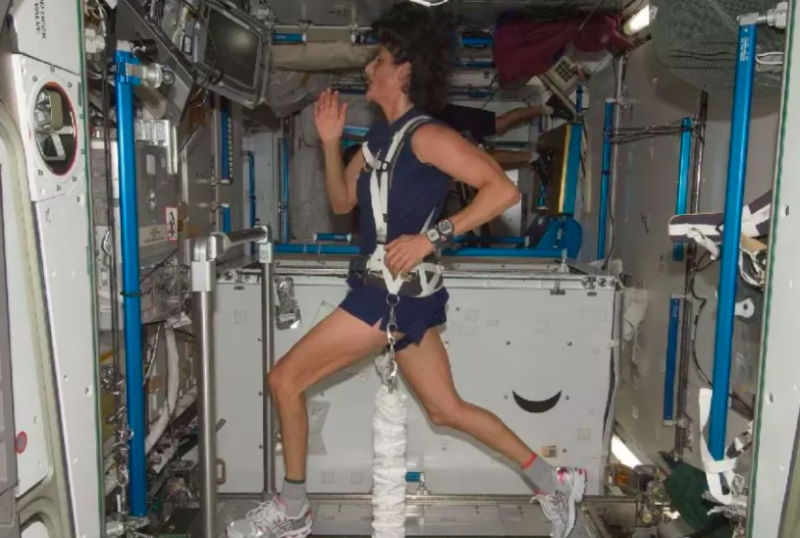 NASA astronaut Sunita Williams is held down by a bungee harness as she exercises on the Combined Operational Load Bearing External Resistance Treadmill. Image via NASA.

There is no gravity on the International Space Station (ISS), and Mars only has about a third of Earth’s gravity. This plays havoc with the human body, Jurblum said. Our muscles are so used to fighting gravity on Earth that its absence means they weaken and waste.

Astronauts must do two to three hours of exercise every day just to maintain muscle mass and cardiovascular fitness. The heart loses muscle which would be extremely dangerous if they didn’t maintain it through exercise.

Tight, elastic body suits or “penguin suits,” developed by the Soviet space program, attempt to mimic the effects of gravity on muscles by providing a deep compression force on the skin, muscle, and bone—meaning they have to work harder to perform normal movements. But they’re far from perfect, Jurblum says.

A common hazard on the ISS is the fine specks that float around the cabin, often lodging in the eyes of astronauts and causing abrasions. But the lack of gravity and the movement of fluids are what can cause the most serious issues for astronauts, said Jublum.

Most end up wearing glasses in space and when they come back, some even have permanent changes to their vision.

The deterioration results from the fluid shift to the head building up in the skull where it bulges into the back of the eyeball and changes the shape of the lens. Jurblum said:

This bulging seems to cause the irreversible vision problems we’re trying to understand and manage. 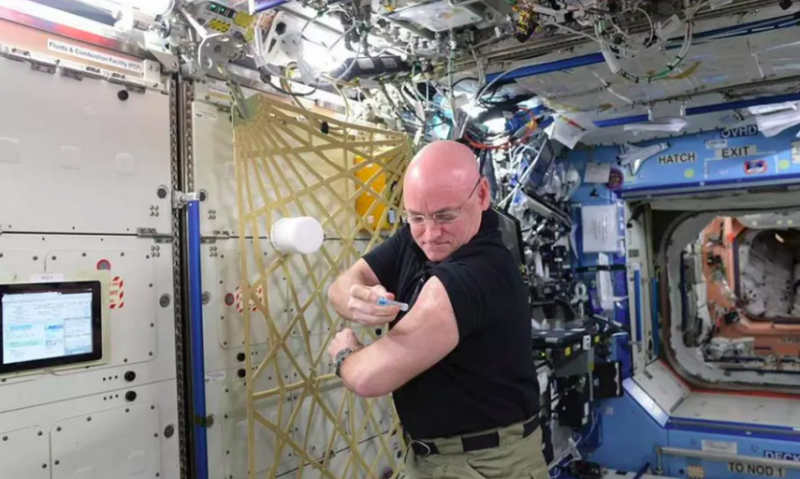 Astronaut Scott Kelly administers the flu vaccination to himself aboard the International Space Station. Image via NASA/Scott Kelly.

If you catch a cold on Earth, you stay home and it’s no big deal. Space is another story. You’re living a densely packed, confined space—breathing recirculated air, touching common surfaces over and over again, with a lot less opportunity to wash.

The human immune system doesn’t work as well in space, so mission members are isolated for a few weeks before lift-off to guard against illness. Jurblum said:

We’re not sure why, but it seems that bacteria are more dangerous in space. On top of that, if you sneeze in space, all the droplets come straight out and keep going. If someone has a flu, everyone is going to get it and there are limited medical facilities and a very long way to the nearest hospital.

Luckily, there have not yet been any major medical emergencies in space, but astronauts have training to deal with them.

For instance, ISS astronauts have developed a way to perform CPR in zero gravity by bracing their legs on the ceiling while pushing down on the patient on the floor below.

While a rescue from the ISS can be performed within a day, the people who go to Mars will be an eight-month journey away, and they need to be prepared to manage on their own, Jurblum said:

How do you lift them on a stretcher, get them into an airlock, out of their suit, and onto a surgical table with a doctor, a botanist, and a couple of scientists to help do surgery? You may have an orthopedic surgeon on Earth sending you information on how to do it, but there is a 20-minute time delay.

Here on Earth, Mars Analogs simulate some of the conditions human beings could experience during a future mission to Mars, allowing researchers to work on solutions to situations like what to do if a team member breaks their leg while outside the base. 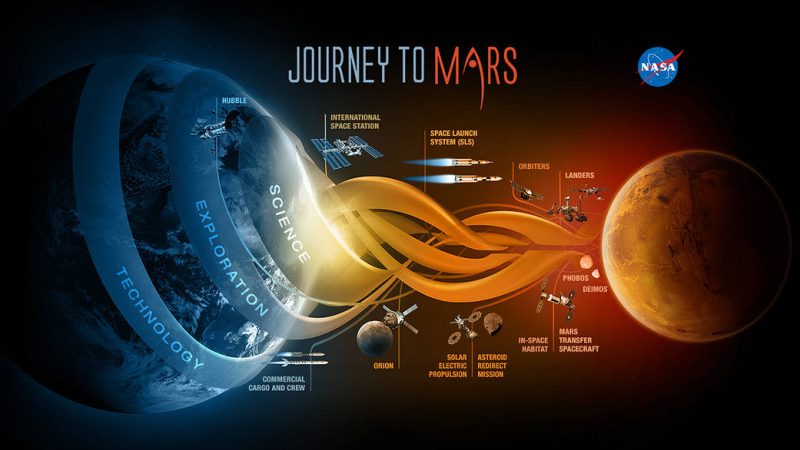 NASA is developing the capabilities needed to send humans to an asteroid by 2025 and Mars in the 2030s – goals outlined in the bipartisan NASA Authorization Act of 2010 and in the U.S. National Space Policy, also issued in 2010. Read more about NASA’s plans for a journey to Mars via NASA.

Read more from the University of Melbourne