The Hubble Space Telescope has been in safe mode since last Friday evening, following the failure of one of the gyros that helps stabilize it. NASA is analyzing the problem and hopes to resume operations soon. 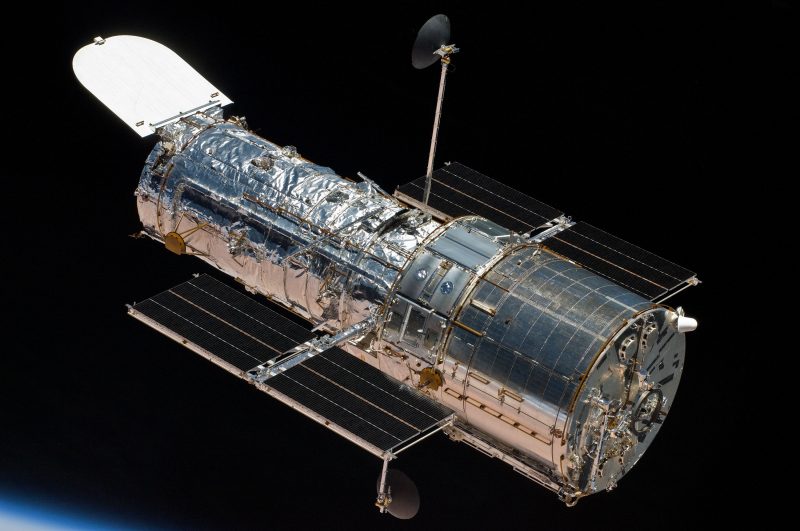 This photo of the Hubble Space Telescope was taken on the 5th servicing mission to the observatory in 2009. Image via NASA.

NASA said on October 8, 2018, that the Hubble Space Telescope has been in “safe” mode – that is, not in an operational mode – since Friday, October 5, shortly after 6 p.m. EDT. NASA said the telescope entered safe mode after one of the three gyroscopes (gyros) actively being used to point and steady the telescope failed, and added:

Safe mode puts the telescope into a stable configuration until ground control can correct the issue and return the mission to normal operation.

Meanwhile, NASA said, the telescope’s instruments – which have been used, arguably, to provide the most mind-expanding views of the universe since Galileo aimed his first telescope skyward in the early 1600s – are:

… still fully operational and are expected to produce excellent science for years to come.

The Hubble Space Telescope was built with multiple redundancies, NASA said. It had six new gyros installed during Servicing Mission-4 in 2009. Hubble usually uses three gyros at a time for maximum efficiency, but, NASA said, it:

… can continue to make scientific observations with just one.

The telescope is known to be nearing the end of its active life, with the James Webb Space Telescope – now scheduled for launch no earlier than 2021 – slated to be its successor. The gyro that failed had been exhibiting end-of-life behavior for approximately a year, NASA said, and its failure was not unexpected; two other gyros of the same type had already failed. The remaining three gyros available for use are technically enhanced and therefore expected to have significantly longer operational lives. NASA said:

Two of those enhanced gyros are currently running. Upon powering on the third enhanced gyro that had been held in reserve, analysis of spacecraft telemetry indicated that it was not performing at the level required for operations. As a result, Hubble remains in safe mode. Staff at NASA’s Goddard Space Flight Center and the Space Telescope Science Institute are currently performing analyses and tests to determine what options are available to recover the gyro to operational performance.

Science operations with Hubble have been suspended while NASA investigates the anomaly. An Anomaly Review Board, including experts from the Hubble team and industry familiar with the design and performance of this type of gyro, is being formed to investigate this issue and develop the recovery plan. If the outcome of this investigation results in recovery of the malfunctioning gyro, Hubble will resume science operations in its standard three-gyro configuration.

If the outcome indicates that the gyro is not usable, Hubble will resume science operations in an already defined ‘reduced-gyro’ mode that uses only one gyro. While reduced-gyro mode offers less sky coverage at any particular time, there is relatively limited impact on the overall scientific capabilities.

Bottom line: The Hubble Space Telescope has been in safe mode since last Friday evening, following the failure of one of the gyros that helps stabilize it. NASA is analyzing the problem and hopes to resume operations soon.