A transit of a planet in front of its star has revealed a water-covered world with a thick, steamy atmosphere.

Scientists announced today (February 21, 2012) that observations from the Hubble Space Telescope have revealed a new class of exoplanet: a water-covered planet with a thick, steamy atmosphere. The planet is about 2.7 times Earth’s diameter and weighs almost seven times as much.

Zachory Berta of the Harvard-Smithsonian Center for Astrophysics (CfA) in Massachusetts and his international team used Hubble’s Wide Field Camera 3 to observe the planet – which astronomers call GJ 1214b. GJ 1214b was first discovered in 2009.

Artist’s concept of a red dwarf star, perhaps much like the one orbited closely by GJ 1214b.

GJ 1214b orbits a red dwarf star, a smallish class of stars about half the size of our sun and having a surface temperature less than 4,000 Kelvin. In contrast, our own sun’s temperature is 5,775 Kelvin. The planet orbits this coolish star at a distance of 1.3 million miles (in contrast to Earth’s average 93 million miles).

So although the star is cooler than our sun, the planet is hot! Its temperature is estimated at around 450 degrees F (232 C).

CfA’s ground-based MEarth Project originally discovered this planet in 2009. In 2010, CfA’s Jacob Bean and his team reported that they had observed the planet’s atmosphere and that the atmosphere was likely composed mainly of water. At that time, they couldn’t confirm the finding, as the data might also be interpreted as a planet-covering haze.

Transit of Venus on June 8, 2004. A transit of the planet GJ 1214b in front of its red dwarf star revealed new information to astronomers. Image Credit: Wikimedia Commons

But more recently Berta and his team were able to use Hubble to analyze light from the planet’s star as that starlight was seen through the planet’s atmosphere during a transit of the planet in front of its star as seen from our earthly vantage point. Like the transit of Venus across our sun’s face coming up in June 2012, transits can reveal information previously unknown to astronomers. In the case of GJ 1214b transiting across the face of its cool red dwarf star, the transit revealed a spectrum that strongly suggests a thick atmosphere of water vapor.

In a press release, Berta said:

GJ 1214b is like no planet we know of. A huge fraction of its mass is made up of water . . . The high temperatures and high pressures would form exotic materials like “hot ice” or
“superfluid water” – substances that are completely alien to our everyday experience. 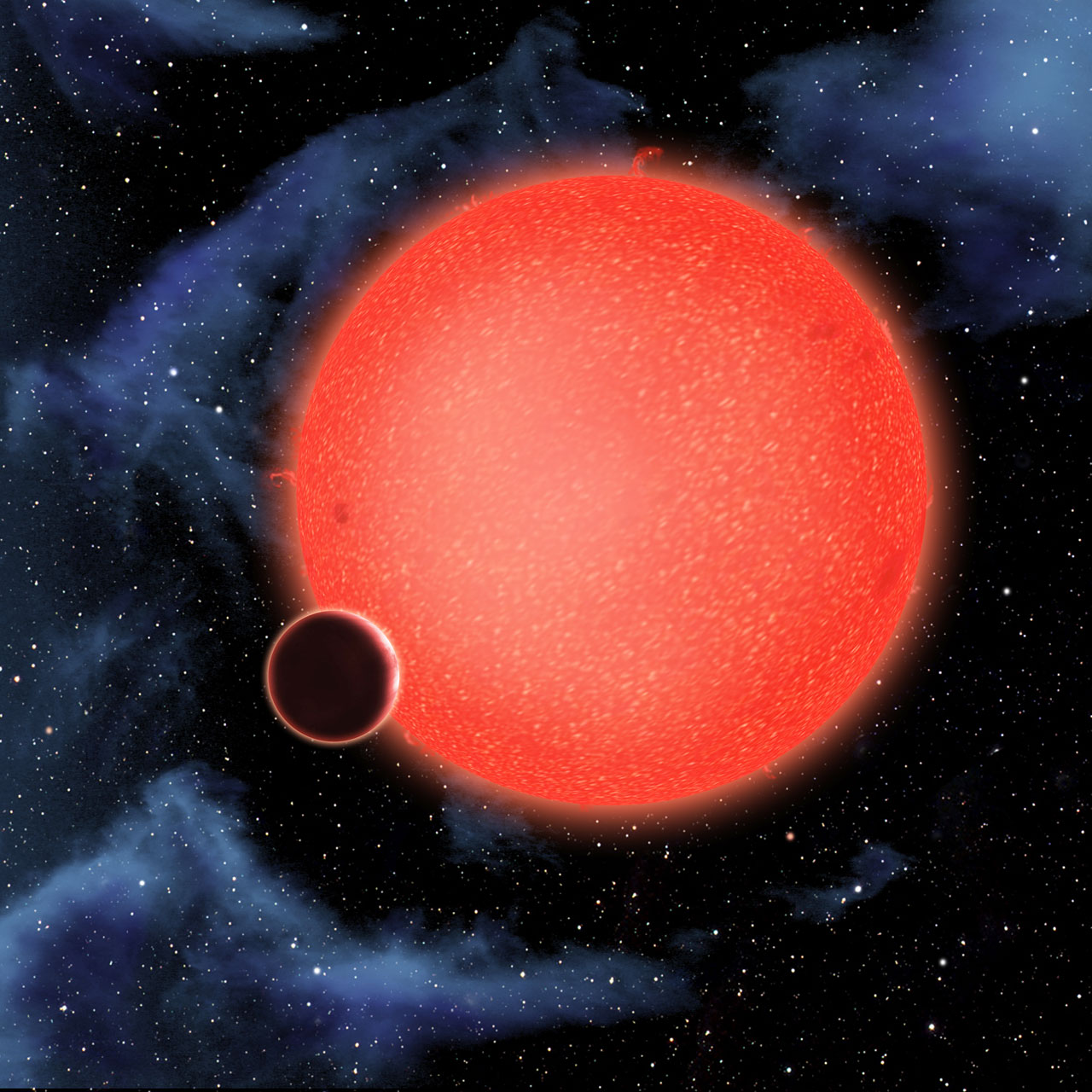 GJ 1214b is located 40 light-years from Earth, a relatively small distance, making it an excellent candidate for study by the James Webb Space Telescope, which is expected to launch in 2018. The Webb will use infrared to study, among other things, the atmospheric composition of exoplanets, in the hopes of finding planets that could potentially harbor life.

Bottom line: On February 21, 2012, scientists announced that observations from the Hubble Space Telescope have revealed a water-covered exoplanet with a thick, steamy atmosphere. The planet, called GJ 1214b, is about 2.7 times Earth’s diameter and weighs almost seven times as much. A transit of the planet in front of its red dwarf star allowed scientists to draw conclusions about it.

Last transit of Venus in 21st century will happen in June 2012.