Successful splashdown for SpaceX Crew Dragon in Gulf of Mexico

The two-man SpaceX Crew Dragon splashed down successfully in the Gulf of Mexico on Sunday, August 2, 2020, completing a two-month demo mission to the International Space Station and back. The crew splashed down at 18:48 UTC (2:48 p.m. ET), within the target landing area in the Gulf of Mexico off the coast of Pensacola, Florida. It was the first splashdown in 45 years, following the joint U.S.-Soviet Apollo-Soyuz mission in 1975. Astronauts Robert Behnken and Douglas Hurley spent 63 days in space and orbited Earth 1,024 times.

"Thanks for flying @SpaceX."

A 2:48pm ET, @AstroBehnken and @Astro_Doug splashed down, marking the first splashdown of an American crew spacecraft in 45 years. #LaunchAmerica pic.twitter.com/zO3KlNwxU3

Applause is heard from the @SpaceX teams as @Astro_Doug has joins @AstroBehnken safely out of the Dragon Endeavour spacecraft. #LaunchAmerica pic.twitter.com/3aBzXbAzuG

The crew had been originally intended to splash down in the Atlantic, but the location was changed due to Hurricane Isaias’ pending arrival on the east coast of Florida.

Behnken and Hurley had been in space since May 30, when they launched at the helm of the first crewed U.S. mission to orbit on a private spacecraft, part of a SpaceX-NASA partnership. 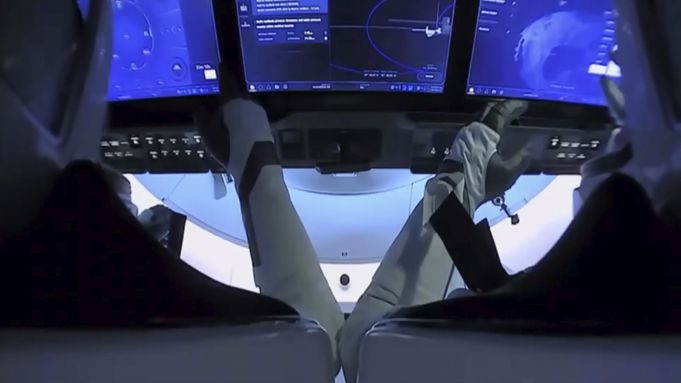 In this image from video made available by NASA, astronauts Doug Hurley, left, and Bob Behnken prepare for undocking from the International Space Station, aboard the SpaceX Crew Dragon capsule on Saturday, August 1, 2020. Image via NASA/ AP.