How to see Venus in daytime

Another time of greatest brilliancy is coming up for Venus, when many spot this brightest of planets in a blue daytime sky. Here’s how you might try it. 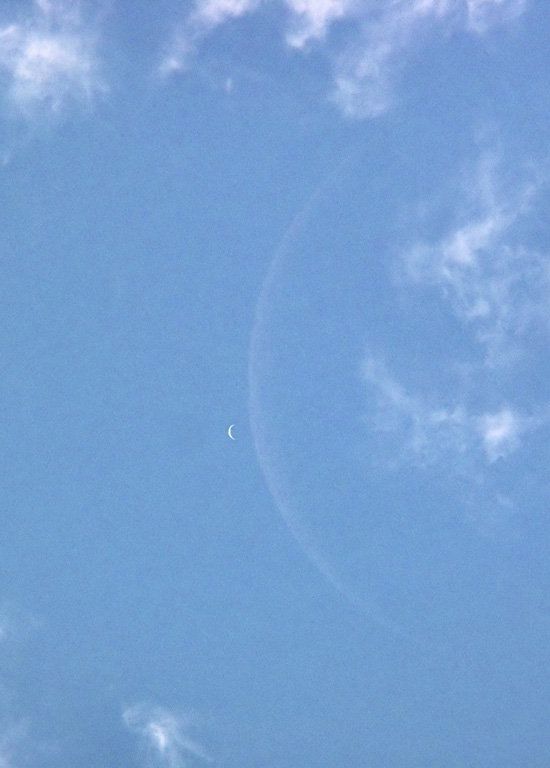 Crescent Venus (left) and crescent moon, through a telescope, in daytime. Venus is the most commonly seen sky object seen in daytime, after the sun and moon. Image via NASA.

Have you ever seen the moon in a daytime sky? You can see the brightest planet, Venus, in daylight, too, if you know exactly where to look. The coming weeks offer a great opportunity for seeing Venus in a blue daytime sky. The planet is up before the sun now – low in the east as dawn breaks – and it’s approaching another time of greatest brilliancy in late November and early December. Many will find Venus before sunup, and watch it with the eye until after the sun rises. Others will capture Venus in daylight on film, especially around December 2 to 5, when Venus will be near the waning moon.

Venus is bright. Not counting some short-lived meteors and comets, it’s the brightest natural object in the sky other than the sun and the moon. Venus is often so bright that it is easily viewed by the unaided human eye during daylight hours. It’s not always easy, though. In this post, we’ll tell you how to improve your chances of seeing Venus during the day. 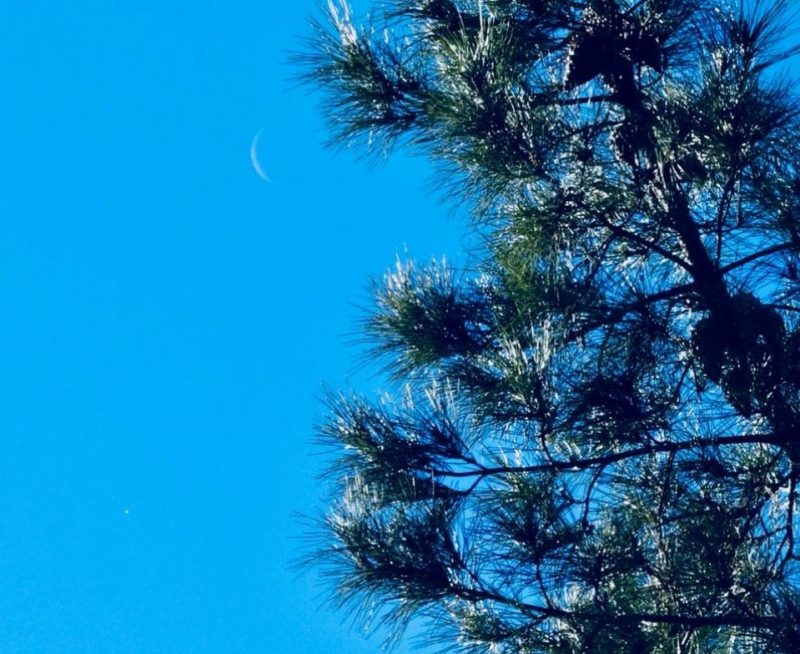 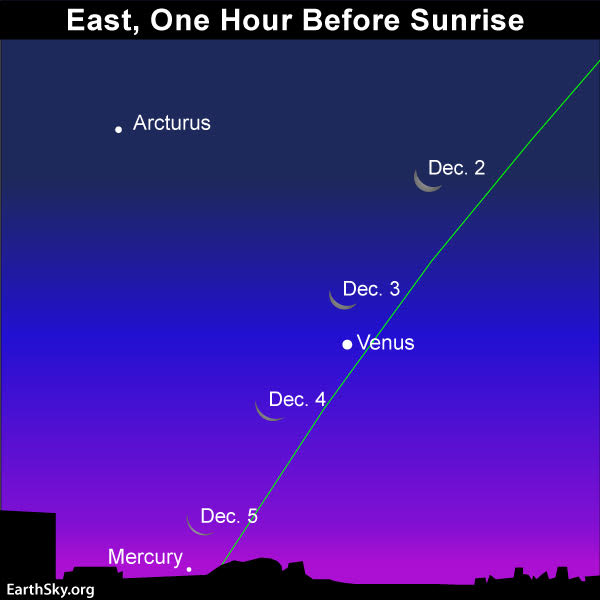 Here are 4 great mornings to look for Venus in daylight. On December 2 to 5, 2018, the brightest planet will be near the waning crescent moon. Spot them before sunup, and follow them as the sky lightens. Read more.

No matter where you are on Earth, here are some general rules to follow:

1. Get some good, free, open source planetarium software that’ll let you set your latitude and longitude … and show you the exact orientation of Venus with respect to the sunrise (or the moon) in your sky on a specific date. There are lots of options here. Many people like Stellarium. Or you can try Google Planetarium. Or maybe you have your own favorite. The great value of using planetarium software is that it allows you to see the exact orientation of objects in your sky.

2. Finding Venus in daylight in the morning sky is much easier than finding it in the evening sky. That’s because you can start watching it before sunrise, then follow it until after sunrise. If you lose it, try scanning with your binoculars! Or try again the next morning.

3. Need a good sunrise/sunset calculator? Try this one.

4. When you spot Venus in daylight, you’d find it a very small and inconspicuous object. It’s much less conspicuous than the daytime moon. The easiest way to find Venus in daylight is to have something more easily found nearby from which you can navigate to the otherwise inconspicuous daytime planet. The best landmark, of course, is the moon. Try the mornings of December 2, 3 or 4, when the moon will be nearby. Those mornings will offer you good photo opportunities as well. And if you catch a good photo, be sure to submit it to EarthSky! 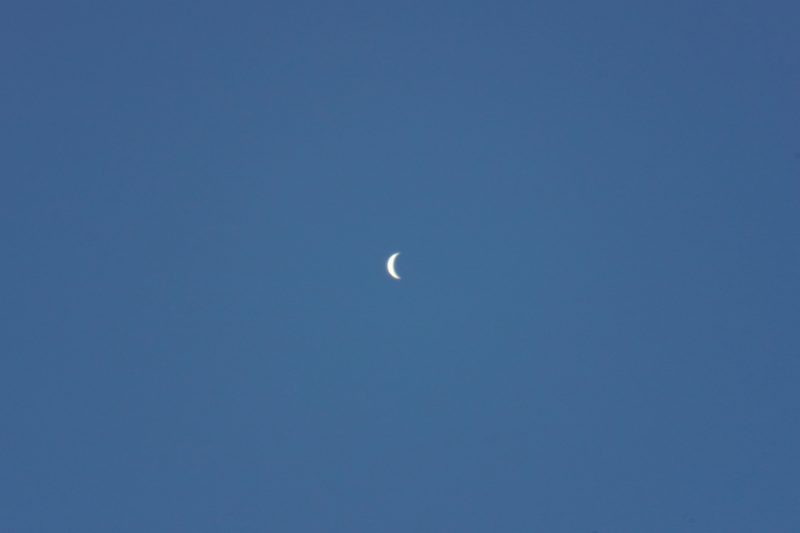 This image shows a crescent Venus, as you’d see it through a telescope now, caught by Steven Bellavia in Mattituck, New York on Nov. 23, 2018. And he says he’s been seeing Venus AFTER sunrise! He offers these tips for seeing Venus in a daylight sky. 1. Put a building (not a tree) between you and the sun, to the east of Venus. Make sure you are completely in the shade of the building, and cannot see the sun. 2. Start with very low-power binoculars or a hand-held 6×30 finderscope (DO NOT point either of these at or near the sun!) 3. After finding Venus with the binoculars or finderscope, slowly and carefully remove the binocular or finderscope away from your eyes, without moving your head, and try to spot Venus with your eyes.

And, remember, if you miss Venus in daytime, you can still catch it before sunup! Venus is blazing away in the east before sunup now. It’s the brightest object in that part of the sky. 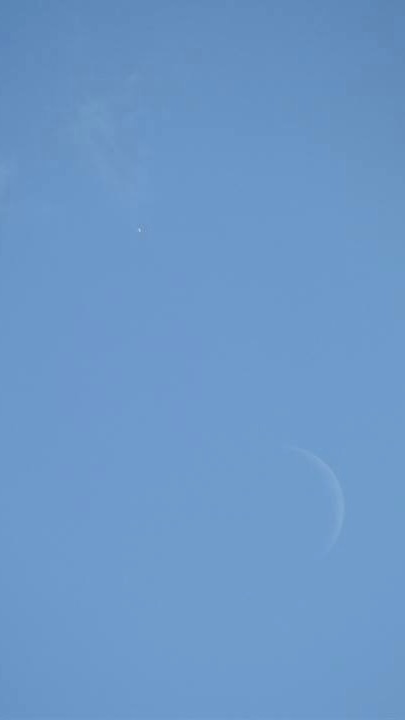 Venus and moon in daylight on September 8, 2013, as captured by Enrique Fiset in Canada. Thank you, Enrique!

Bottom line: This post tells you how to see Venus in a blue daytime sky in late 2018. Late November and early December are great times to look, because Venus is brightest around then. Good luck!