Look up: It’s a satellite!

“I use the Heavens Above astronomy site or the Starry Night app to check on satellites … they are fun to spot.” 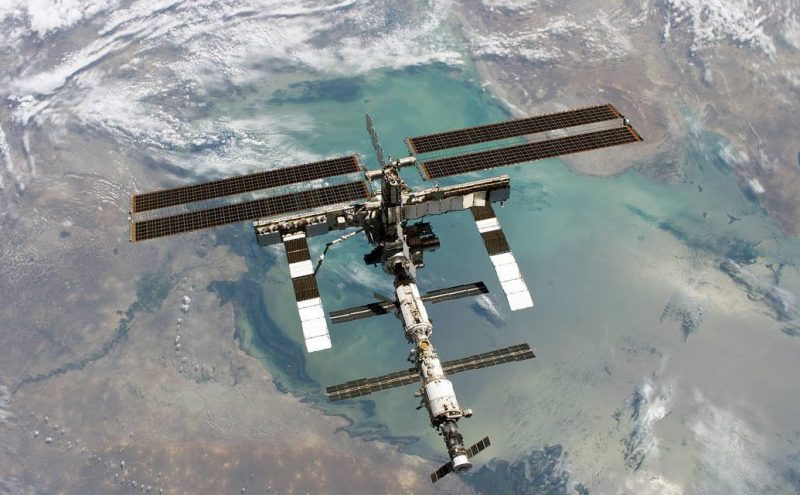 The ISS sees us on Earth, but look up at night and you may see it, too. Image via NASA.

I saw my first artificial satellite with my naked eyes during the summer of 1994. I was watching pieces of comet Shoemaker-Levy 9 impact Jupiter from a small observatory with a college astronomy club when someone pointed up – away from the telescope – and said, “Look, it’s a satellite!”

Before then, I had never really thought much about whether or not satellites were visible without a telescope or binoculars. They are fun to spot, though, so ever since then, I point them out whenever I am at the telescopes for a public observing event. I often use the Heavens Above astronomy site or the Starry Night app to check on satellites that catch my attention.

And you can too. On any given night, if it is dark and with little moonlight, you can easily see several satellites – launched to orbit Earth for various purposes. 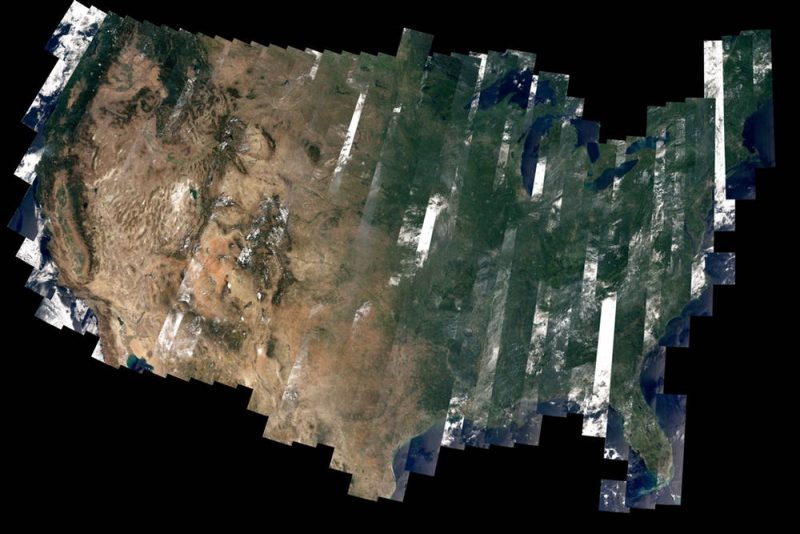 Some satellites – including Landsat 8 – send back images of Earth. Image via NASA/David Roy.

Hardware in the heavens

It’s tricky to get a good estimate for how many satellites are in the skies above us because many are classified or were launched by countries that don’t openly share the details of their launches. The Union of Concerned Scientists maintains a searchable database of satellites, which lists more than 1,700 in orbit right now, while Heavens Above lists about the same number (although it includes some that burned up years ago). Some sources suggest there could be several thousand more than that currently in the skies. 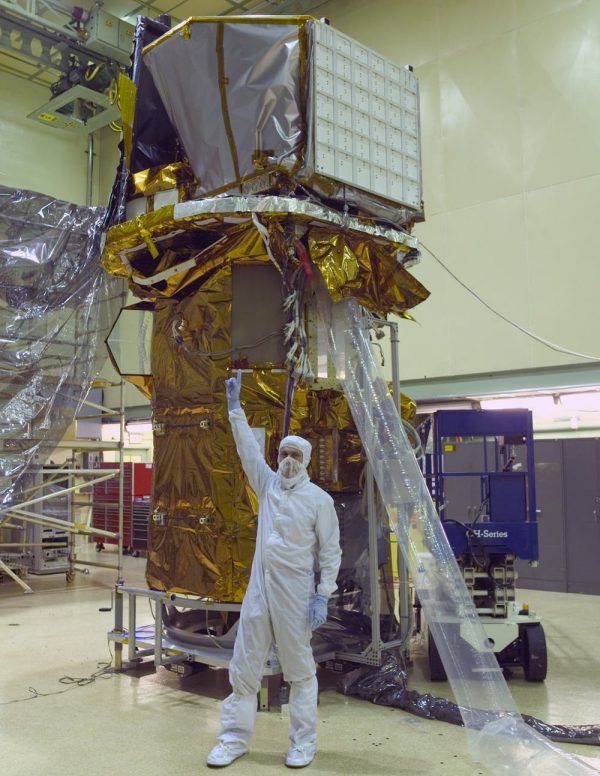 Neil Gehrels in the cleanroom with the Swift telescope while under construction. Image via NASA.

Countries and companies launch satellites for lots of reasons; many are designed and built for the purpose of doing astronomy. For example, my colleagues work with the NASA Goddard Space Flight Center to operate the Neil Gehrels Swift Observatory, which orbits the Earth at 600 kilometers [380 miles] using telescopes to detect high-energy light, including ultraviolet, X-rays and gamma rays.

Besides these kinds of astrophysics missions, there are communications satellites, satellites that make up the GPS network, satellites that study the Earth (such as weather satellites), and those launched by the military for defense purposes, such as taking images of sensitive nuclear sites.

They all transmit their data down to ground stations using radio signals, which can be collected every time the satellite passes over the station. A typical satellite, like Swift, takes only about 90 minutes to go all the way around the Earth once, so it has multiple opportunities to transfer data every day.

An Iridium flare in the night sky. Image via Vanessa Patea/Flickr.

What you can see

Only some satellites are large enough, reflective enough, and on low enough orbits to be seen by the naked eye, but on a good night I have seen between five and 10 of them in a few hours of watching. A typical satellite can be visible for several minutes. You can follow one by eye, as it tracks across a long path across the sky.

The International Space Station is one of the most spectacular – it can look brighter than most stars. “Iridium flares” also stand out; they occur when one of the many commercial communications satellites launched by the company Iridium is at the right part of its orbit for the shiniest part of its surface to reflect sunlight to your location. These Iridium flares can go from invisible to the naked eye, to brighter than the planet Venus, and back again, in less than a minute. People who aren’t familiar with their predictable behavior often mistake them for UFOs.

Modern satellites are designed to allow operators to direct them to re-enter Earth’s atmosphere in a controlled manner and completely incinerate. Every year, though, some satellites make an “uncontrolled” reentry. This is what recently happened with Chinese satellite Tiangong 1. 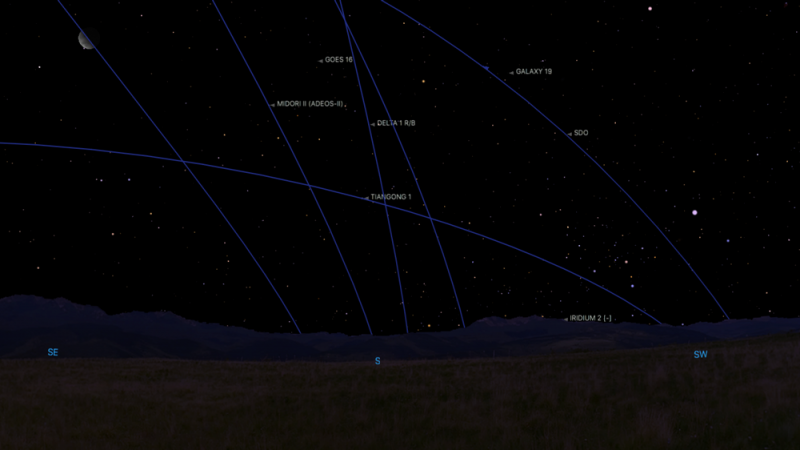 Apps like Starry Night can guide you through what you’re seeing in the sky, including satellites. This was the view from Penn State in the early morning of December 21, 2016. Image is a Starry Night screenshot.

A couple years back, at a public observing event, we spotted a really bright satellite, brighter than most planets. Using reference resources, I was able to verify that we were seeing Tiangong-1. It had originally been part of China’s program to build a space station, though no humans have been on board for several years. Eventually the satellite lost the ability to communicate with the ground, so there was no easy way to command it to fire its engines to either raise it to a higher orbit or direct it into a controlled descent.

Tiangong-1 slowly, but unpredictably, began to spiral in closer to the Earth. It eventually mostly burned up in the atmosphere – but because of its large size, some pieces likely splashed into the southern Pacific Ocean around 8:15 p.m. EDT, on April 1, 2018.

A long exposure captures an Iridium flare, which looks like a horizontal streak in middle of this image. Image via Kevin Baird/Flickr.

Given that Earth has so much uninhabited area, no one has ever been hit by space debris. So the next time you’re stargazing, don’t worry about the infinitesimal risk that a satellite will fall down to where you are – just enjoy the view of these human-made objects orbiting above us in space.

Bottom line: How to spot satellites in your night sky.