How can the cost of space travel – to and from the moon and possibly to Mars – be reduced? One approach is to mine the moon for necessary resources. 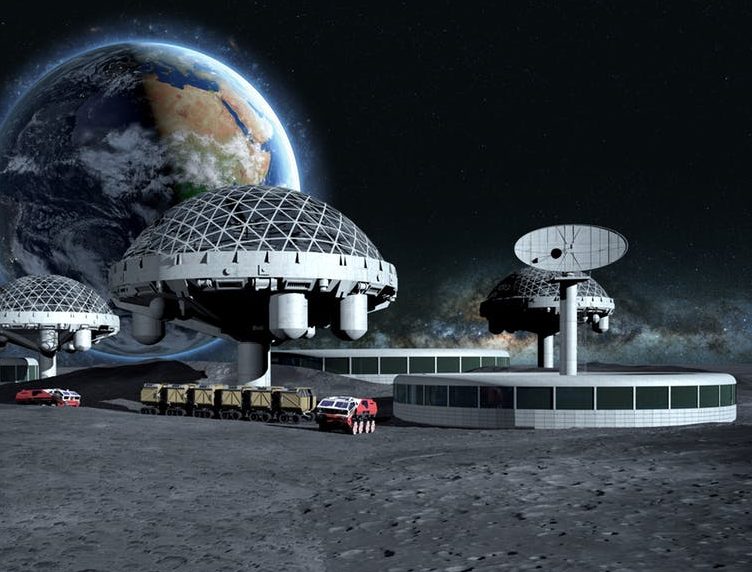 Artist’s concept of a moon base with a view of Earth in the distance. Image via Pavel Chagochkin/Shutterstock.com.

If you were transported to the moon this very instant, you would surely and rapidly die. That’s because there’s no atmosphere, the surface temperature varies from a roasting 130 degrees Celsius (266 F) to a bone-chilling minus 170 C (minus 274 F). If the lack of air or horrific heat or cold don’t kill you then micrometeorite bombardment or solar radiation will. By all accounts, the moon is not a hospitable place to be.

Yet if human beings are to explore the moon and, potentially, live there one day, we’ll need to learn how to deal with these challenging environmental conditions. We’ll need habitats, air, food and energy, as well as fuel to power rockets back to Earth and possibly other destinations. That means we’ll need resources to meet these requirements. We can either bring them with us from Earth – an expensive proposition – or we’ll need to take advantage of resources on the moon itself. And that’s where the idea of “in-situ resource utilization,” or ISRU, comes in.

Underpinning efforts to use lunar materials is the desire to establish either temporary or even permanent human settlements on the moon – and there are numerous benefits to doing so. For example, lunar bases or colonies could provide invaluable training and preparation for missions to farther flung destinations, including Mars. Developing and utilizing lunar resources will likely lead to a vast number of innovative and exotic technologies that could be useful on Earth, as has been the case with the International Space Station.

As a planetary geologist, I’m fascinated by how other worlds came to be, and what lessons we can learn about the formation and evolution of our own planet. And because one day I hope to actually visit the moon in person, I’m particularly interested in how we can use the resources there to make human exploration of the solar system as economical as possible. 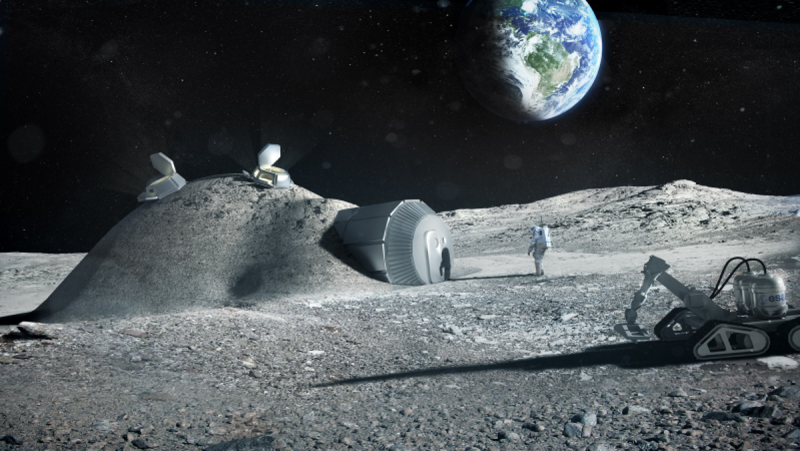 ISRU sounds like science fiction, and for the moment it largely is. This concept involves identifying, extracting and processing material from the lunar surface and interior and converting it into something useful: oxygen for breathing, electricity, construction materials and even rocket fuel.

Many countries have expressed a renewed desire to go back to the moon. NASA has a multitude of plans to do so, China landed a rover on the lunar farside in January and has an active rover there right now, and numerous other countries have their sights set on lunar missions. The necessity of using materials already present on the Moon becomes more pressing. 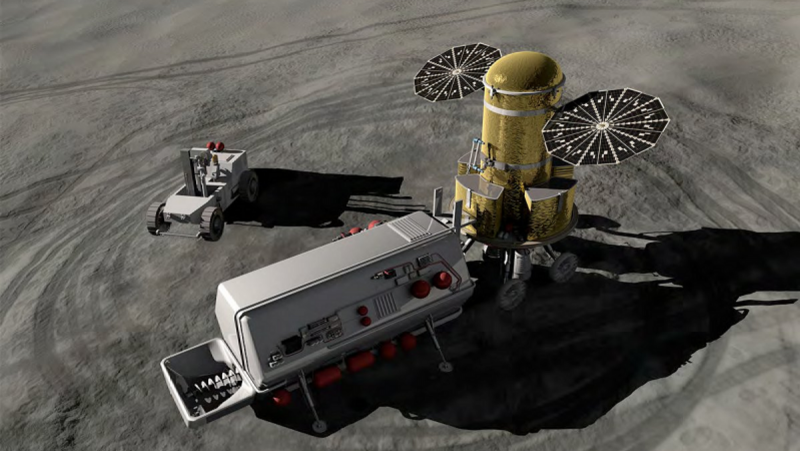 Anticipation of lunar living is driving engineering and experimental work to determine how to efficiently use lunar materials to support human exploration. For example, the European Space Agency (ESA) is planning to land a spacecraft at the lunar South Pole in 2022 to drill beneath the surface in search of water ice and other chemicals. This craft will feature a research instrument designed to obtain water from the lunar soil or regolith.

There have even been discussions of eventually mining and shipping back to Earth the helium-3 locked in the lunar regolith. Helium-3 (a non-radioactive isotope of helium) could be used as fuel for fusion reactors to produce vast amounts of energy at very low environmental cost – although fusion as a power source has not yet been demonstrated, and the volume of extractable helium-3 is unknown. Nonetheless, even as the true costs and benefits of lunar ISRU remain to be seen, there is little reason to think that the considerable current interest in mining the Moon won’t continue.

It’s worth noting that the moon may not be a particularly suitable destination for mining other valuable metals such as gold, platinum or rare earth elements. This is because of the process of differentiation, in which relatively heavy materials sink and lighter materials rise when a planetary body is partially or almost fully molten.

This is basically what goes on if you shake a test tube filled with sand and water. At first, everything is mixed together, but then the sand eventually separates from the liquid and sinks to the bottom of the tube. And just as for Earth, most of the moon’s inventory of heavy and valuable metals are likely deep in the mantle or even the core, where they’re essentially impossible to access. Indeed, it’s because minor bodies such as asteroids generally don’t undergo differentiation that they’re such promising targets for mineral exploration and extraction. 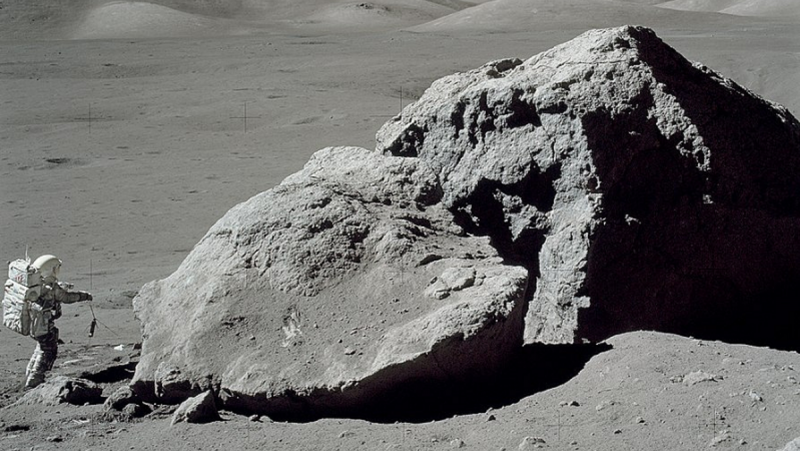 Apollo 17 astronaut Harrison H. Schmitt standing beside a boulder on the lunar surface. Image via NASA.

Indeed, the moon holds a special place in planetary science because it is the only other body in the solar system where human beings have set foot. The NASA Apollo program in the 1960s and 70s saw a total of 12 astronauts walk, bounce and rove on the surface. The rock samples they brought back and the experiments they left there have enabled a greater understanding of not only our moon, but of how planets form in general, than would ever have been possible otherwise.

From those missions, and others over the ensuing decades, scientists have learned a great deal about the moon. Instead of growing from a cloud of dust and ice as the planets in the solar system did, we’ve discovered that our nearest neighbor is probably the result of a giant impact between the proto-Earth and a Mars-sized object. That collision ejected a huge volume of debris, some of which later coalesced into the moon. From analyses of lunar samples, advanced computer modeling and comparisons with other planets in the solar system, we’ve learned among many other things that colossal impacts could be the rule, not the exception, in the early days of this and other planetary systems.

Carrying out scientific research on the moon would yield dramatic increases in our understanding of how our natural satellite came to be, and what processes operate on and within the surface to make it look the way it does. 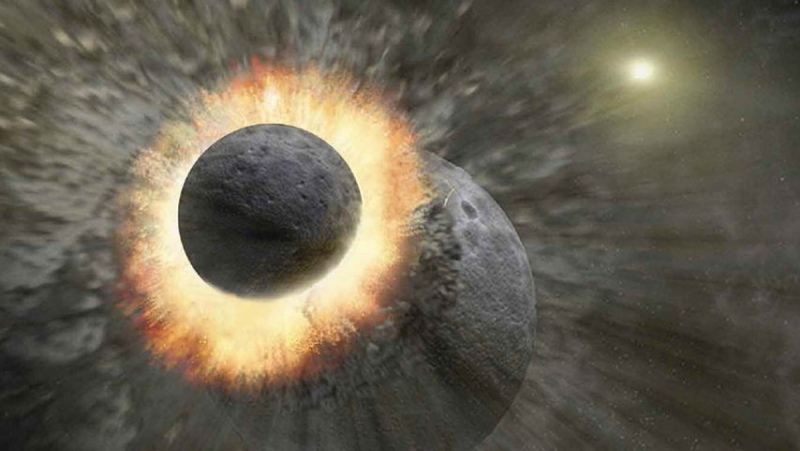 Artist’s concept of the collision between the proto-Earth and a Mars-sized object. Image via NASA/JPL-Caltech/T. Pyle.

The coming decades hold the promise of a new era of lunar exploration, with humans living there for extended periods of time enabled by the extraction and use of the moon’s natural resources. With steady, determined effort, then, the moon can become not only a home to future explorers, but the perfect stepping stone from which to take our next giant leap.