Video: Sunrise and sunset from the moon

This video, from the Kurdistan Planetarium in the U.K., shows the sun rising as seen from the moon’s surface and setting two weeks later.

The video below, from the Kurdistan Planetarium in the U.K., shows the sun rising as seen from the moon’s surface and setting two weeks later.

As the video shows, sunrise on the moon comes suddenly. On Earth, when you watch a sunrise or sunset, you can see colored light in the sky, scattered by our planet’s atmosphere. The moon doesn’t have an atmosphere, so there are no twilight colors. Plus, if you were watching a sunrise on the moon, you would see stars rise in the sun’s vicinity and cross the sky with the sun throughout the lunar day. And, because there’s no atmosphere on the moon, sunset on the moon would be equally abrupt. The moment after the sun set would be as dark as midnight, with no lingering color at all.

Earth’s atmosphere also makes our sky look blue in the daytime. From the moon, the sky always looks black, even during the lunar day when the sun is shining in the moon’s sky.

Here on Earth, our planet’s spin on its axis carries us from daylight to darkness and back again every 24 hours. Twenty-four hours is the length of an earthly day. A lot of people incorrectly believe the moon doesn’t rotate, but the moon does spin on its axis, too, just as Earth does. It has to in order to keep one face aimed in our direction. As experienced from a single spot on the moon, there are about 29 earthly days from one lunar noon to the next. That means there would be about two weeks between each lunar sunrise and sunset, from any given spot on the moon’s globe. 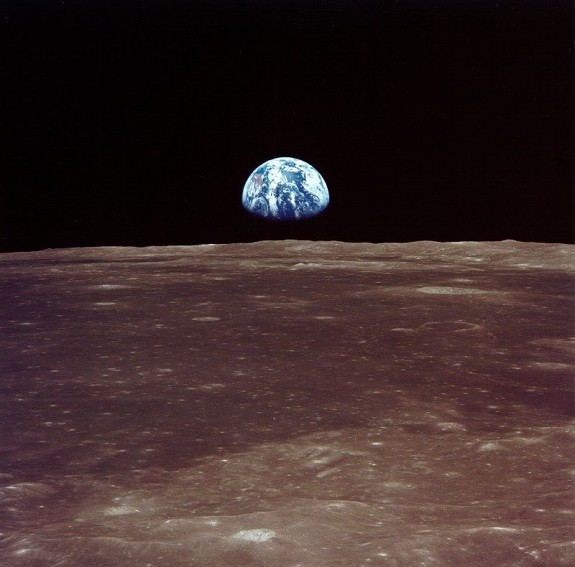 This photo is a classic, taken by Apollo 11 astronauts in 1969. It’s often said to depict an Earthrise as seen from the moon. As seen from any one spot on the moon’s surface, however, the moon doesn’t rise or set. Instead, because one side of the moon always faces Earth, from a given spot on the moon, Earth always hangs in one spot in the lunar sky. See more Apollo 11 images here.

By the way, if you lived on the side of the moon facing Earth, you would see Earth go through phases just as we see moon phases from Earth. Because one side of the moon always faces Earth, from any one spot on the moon, Earth wouldn’t rise or set. It would hang in relatively the same place in the sky as the sun and stars went through their monthly cycle around it.