How dust could make some exoplanets more habitable

A new study from scientists in the UK suggests that atmospheric dust could increase the habitability of some exoplanets, especially those orbiting red dwarf stars.

Three computer simulations depicting how airborne dust can be distributed by winds on rocky exoplanets like Earth. Image via Denis Sergeev/ University of Exeter/ ScienceAlert.

What makes a planet habitable? Various factors can affect a planet’s ability to sustain life, such as temperature, amount of water, composition of both the planet and its atmosphere and the amount of radiation from the host star. Last month, researchers in the U.K. said they’ve found that a common component of atmospheres – dust – could increase the habitability of some exoplanets.

The peer-reviewed results were published in Nature Communications on June 9, 2020.

This is a significant finding, since it suggests that planets with a lot of dust in their atmospheres could have habitable conditions farther from their stars than previously thought. This would, in effect, expand the habitable zone, which is basically the region around a star where temperatures on a rocky could allow liquid water to exist. 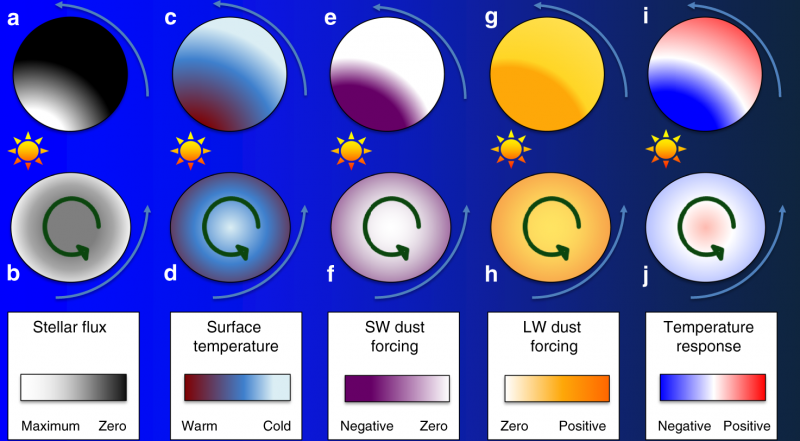 Effects of dust on the climate of planets. For a tidally locked planet (a) and non-tidally locked planet (b), panels a–d show the base state of the planets, e–h show the short- (stellar) and long-wave (infra-red) forcing (change in surface energy balance) introduced by dust and i–j show the resultant effect of the forcing on the surface temperature. Blue arrows show the motion of the planet around the star, and green arrows show the rotation of the planet relative to the star. Image via Boutle et al./ Nature Communications.

Identification of habitable planets beyond our solar system is a key goal of current and future space missions. Yet habitability depends not only on the stellar irradiance, but equally on constituent parts of the planetary atmosphere. Here we show, for the first time, that radiatively active mineral dust will have a significant impact on the habitability of Earth-like exoplanets.

In our own solar system, Mars typically comes to mind when we think of a dusty world, yet it remains a cold, dry planet on the surface due to its very thin atmosphere. But for some exoplanets, especially those that are tidally locked to their stars, it could be a different situation. Ian Boutle, from both the Met Office and University of Exeter and lead author of the study, said in a statement:

On Earth and Mars, dust storms have both cooling and warming effects on the surface, with the cooling effect typically winning out. But these ‘synchronised orbit’ planets are very different. Here, the dark sides of these planets are in perpetual night, and the warming effect wins out, whereas on the dayside, the cooling effect wins out. The effect is to moderate the temperature extremes, thus making the planet more habitable.

The dust factor is especially significant for planets orbiting red dwarf stars, the most common type of star in our galaxy. Many planets around those stars are likely to be tidally locked, orbiting with one side of the planet always facing the star, just as the moon always keeps one side facing Earth. Those planets would have one side always in daylight, and the other always in darkness. If there is a lot of dust, that could help cool down the hotter day side, and warm the colder night side. 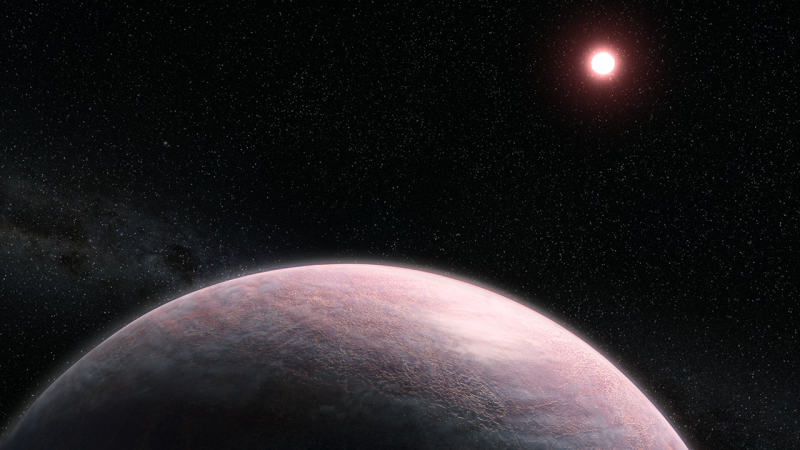 Artist’s concept of a cloudy and rocky exoplanet orbiting a red dwarf star. Dust in the atmospheres of planets like this could moderate the temperature extremes if the planets are tidally locked, helping to make them more habitable. Image via L. Hustak/ J. Olmsted (STScI)/ NASA.

In an interesting scenario, dust could help hot planets retain their surface water, if they have any. A planet that is really hot, like Venus, could be cooled down by enough dust in the atmosphere. The amount of dust would then increase as water starts to be lost on the planet’s surface, which, ironically, in a process called negative climate feedback, would then slow down the loss of water. From the paper:

On tidally-locked planets, dust cools the day-side and warms the night-side, significantly widening the habitable zone. Independent of orbital configuration, we suggest that airborne dust can postpone planetary water loss at the inner edge of the habitable zone, through a feedback involving decreasing ocean coverage and increased dust loading.

The amount of energy a planet receives from its star is an important part of assessing habitability, but as Manoj Joshi from UEA noted, the composition of the atmosphere, including dust, is also very important:

Airborne dust is something that might keep planets habitable, but also obscures our ability to find signs of life on these planets. These effects need to be considered in future research.

The researchers performed a series of simulations of rocky Earth-sized planets and found that naturally occurring mineral dust can have a big impact on the habitability of such planets. 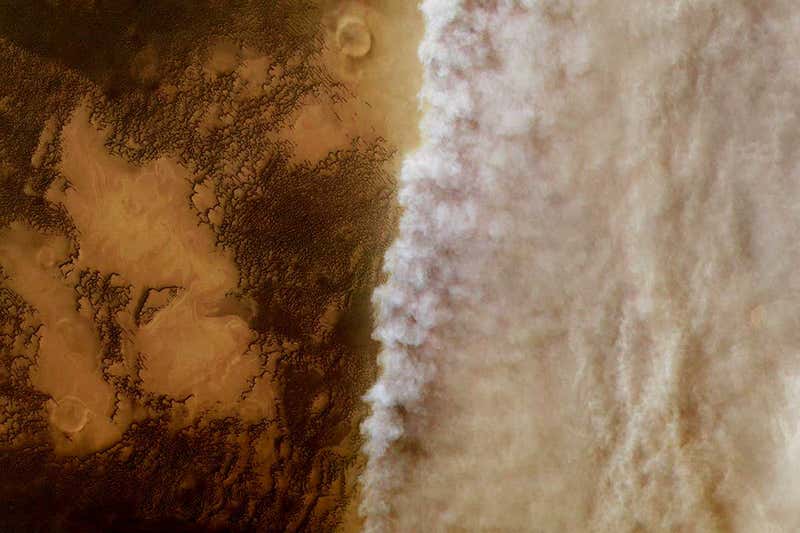 Mars is a very dusty place, and massive dust storms are common, but the dust doesn’t warm the planet much since the atmosphere is so thin. Image via SA/ Roscosmos/ CaSSIS/ CC BY-SA 3.0 IGO/ New Scientist.

Duncan Lyster, who ran an undergraduate experiment as part of the overall study (and now builds his own surfboards), also said:

It’s exciting to see the results of the practical research in my final year of study paying off. I was working on a fascinating exoplanet atmosphere simulation project, and was lucky enough to be part of a group who could take it on to the level of world-class research.

The researchers also point out that dust in a planet’s atmosphere must be taken into account when searching for possible biomarkers in that atmosphere. Those biomarkers could include gases such as oxygen, methane and ozone, and if there also was enough dust, the dust could obscure the detection of them, producing a false negative result. If potential biomarkers were missed in that way, the planet might be erroneously characterized as uninhabitable. Such biomarkers, which will be searched for with upcoming space telescopes like the James Webb Space Telescope (JWST) and others, will be a crucial aspect of the search for evidence of life beyond our solar system. Identifying them is already a challenge due to the extreme distances to these worlds, so knowing the amount of dust in a planetary atmosphere will be important as well. From the paper:

The inclusion of dust significantly obscures key biomarker gases (e.g. ozone, methane) in simulated transmission spectra, implying an important influence on the interpretation of observations. We demonstrate that future observational and theoretical studies of terrestrial exoplanets must consider the effect of dust. 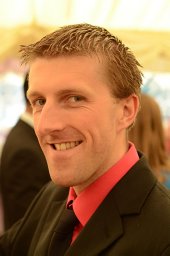 Ian Boutle at the Met Office and University of Exeter, lead author of the new study. Image via Google Scholar.

Nathan Mayne from the University of Exeter, who assisted with the study, also noted how astrophysics in general will play a large role. He said:

Research such as this is only possible by crossing disciplines and combing the excellent understanding and techniques developed to study our own planet’s climate, with cutting edge astrophysics. To be able to involve undergraduate physics students in this, and other projects, also provides an excellent opportunity for those studying with us to directly develop the skills needed in such technical and collaborative projects. With game-changing facilities such as the JWST and E-ELT, becoming available in the near future, and set to provide a huge leap forward in the study of exoplanets, now is a great time to study physics!

The new assessment regarding exoplanetary dust will be very beneficial to scientists who will be looking for biomarkers and other evidence for habitable exoworlds, as well as studying how dust can affect a planet’s climate and environment overall.

Bottom line: Atmospheric dust could increase the habitability of some exoplanets.