Astronomers used to wonder why a galaxy’s spiral arms didn’t wind up tightly around the galaxy’s core as the system rotated. Now they think they know why.

The image above is M33 – a nearby spiral galaxy – probably similar in appearance to our own Milky Way. Galaxies like our own, and like M33, are tens to hundreds of thousands of light-years across. They spin majestically in space over timescales of hundreds of millions of years. How do galaxies such as M33 and our Milky Way keep their spiral shape? 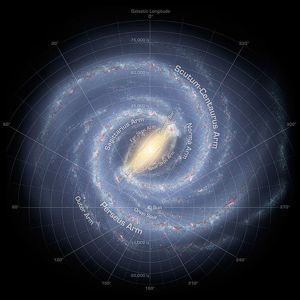 Artist\’s conception of the spiral structure of the Milky Way with two major stellar arms and a bar. (NASA)

Astronomers sometimes call this the “wind-up problem” of the spiral arms. It has been observed that the inner parts of galaxies rotate faster than the outer parts. If so, are the inner parts of the spiral arms moving faster than the other parts? If that is happening, then the galaxy would have no choice but to wind up so much that the spiral structure would be thinned out and ultimately destroyed.

But we can see galaxies billions of light-years away – as well as those relatively nearby – that have maintained their spiral structure. How?

Astronomers believe that a galaxy’s spiral structure originates as a density wave emanating from the galactic center. The idea is that the entire disk of a galaxy is filled with material. As this density wave passes through, it’s thought to trigger bursts of star formation. The spiral arms of a galaxy mark where in the galaxy the density wave recently passed, causing new stars to form and burn brightly.

If that is so, then a spiral galaxy’s arms are visible primarily because they’re made of hot, young stars, and these very luminous stars should live for less than one rotation of the galaxy.

Estimates generally range from about 220 million to about 250 million years for the MIlky Way galaxy’s rotation. Our sun is four to five billion years old. It’s made a couple of dozen revolutions around the galactic center already, according to the reckoning of astronomers.

Given the various estimates for the age of the galaxy as a whole, it seems likely that the whole galaxy has spun around perhaps 50 times.

So, for the moment at least, the riddle seems solved. Astronomers believe a star’s residence within a spiral arm must be a temporary one, and the arms themselves are the result of a shock wave moving through the galaxy.